The Surprising Benefits of Club Training for Strength

It’s not often that an exercise is as cool-looking as it is effective, but club training is changing the game.

Clubs, of course, are traditionally mêlée weapons (read: used for bashing heads in), and the only reason people used to train with them was to improve their feats in battle. It wasn’t until relatively recently that trainers and physical therapists learned that they’re incredible tools for improving performance and recovery for strength athletes.

“The extreme range of motion and the variability of weight distribution means clubs help to improve your internal stabilizing muscles, like the rotator cuff,” says Jonathan Amato, DPT/CSCS, a physical therapist based in Bethpage, New York. “The exercises also cause more joint separation than usual, which helps to lubricate the joint and improve its overall health. It’s kind of like an oil change: it gets the good fluid in and the bad stuff out, which helps to keep everything lubricated and healthy.”

Training focuses heavily on different kinds of swings, and at first glance, you might think a club is just a needlessly elaborate kettlebell. But the long lever, unbalanced weight, and multiple planes of motion mean that clubs offer a lot of benefits you can’t get anywhere else.

There are three kinds that are typically used by athletes, each with their own particular benefits. Take a look at the info below to find out the best ways to implement them in your own training. 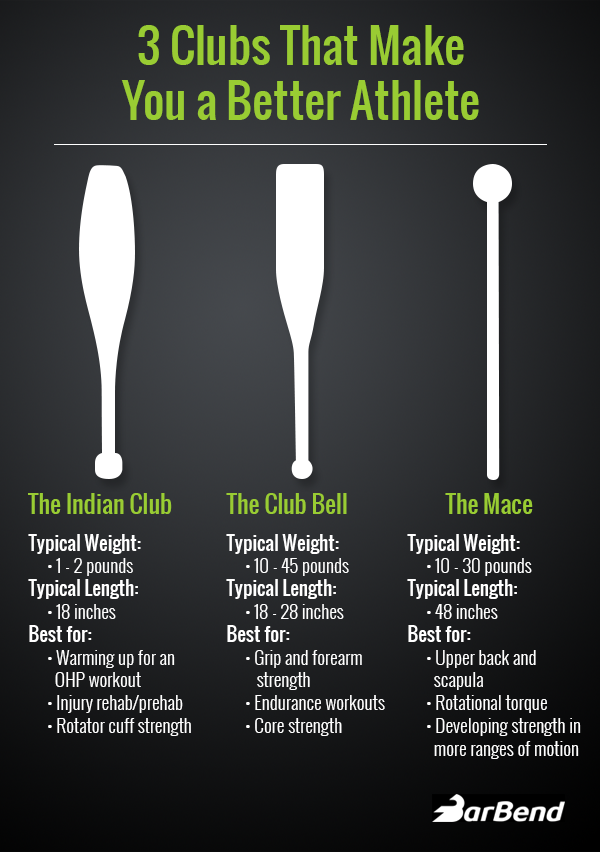 Originally a conditioning tool for wrestlers in ancient Persia, these clubs were popular among Indian wrestlers in the 18th century, when they made their way to England and became a central piece of the country’s Victorian-era health craze.

At one to two pounds and about eighteen inches long, Indian clubs are the lightest of the three, which makes them terrific tools for warm ups and for strengthening the stabilizer muscles of the rotator cuff, which respond best to high repetitions.

“Because they’re light, they provide a great warm up for the shoulder girdle,” says Steve Cotter, founder of the International Kettlebell and Fitness Federation (IKFF) and one of Men’s Health‘s 100 fittest men of all time. “I’d recommend them to warm the shoulders before any kind of overhead press or snatch, but they’re also very good therapeutic tools for a person coming back from a shoulder injury.”

Here’s Cotter’s ideal warmup for any kind of OHP workout.

10 x chest opener (cross two clubs in front of you, then swing them out to the side)

Sometimes called heavy clubs or steel clubs, club bells can weigh up to forty-five pounds and are terrific tools for building strength and endurance, particularly in the grip, forearms, and core.

At a heavier weight and lower reps, Cotter thinks the warm-up described above can provide a great club bell workout, particularly if you focus on the casting and swiping movements. When incorporating with a barbell workout, he suggests warming up with Indian clubs, lifting hard, and finishing with club bells to really hammer the grip and forearms. (Cotter likes to incorporate lunging patterns when he wants lower body work.)

Also called the gada, the mace is another favorite of pehlwani, or Indian wrestlers. Maces aren’t too heavy (they typically weigh between ten and twenty pounds), but the real challenge for the athlete comes from its length: maces are about 4 feet long.

“In terms of core strength, the heavy clubs and the mace are both really effective,” says Cotter. “The difference with the mace is that the lever is longer and it’s more difficult to control, so you don’t need as much weight to have a challenging workout. The movement patterns are pretty similar, though, so it’s really a matter of preference between the two.”

A lot of exercises swing the mace behind the head, which makes it a great for working the scapula, upper back, midline, and other muscles involved with posture. Cotter is also quick to emphasize that both maces and club bells improve rotational torque and strength in multiple planes of motion, two qualities that the traditional barbell jockey often lacks.

“I’m a big proponent of incorporating ranges of motion outside of your normal training,” he says. “If you specialize too much in certain exercises and movement patterns, you’ll overdevelop certain areas and underuse others, so developing other planes of motion is a smart way to reduce injuries.”

His favorite mace exercise is the 360, which you can see him perform in the video above, and the 10 to 2, which looks more like this:

Interested in joining the club? (Get it?) Onnit has an impressive variety of Indian clubs, club bells, and maces you can choose from, or if you’d like to save a little time and money, you can try the adjustable clubs and maces from Adex. Keep swinging!