Generally, I really hate grips. I want to love them because my dainty little hands rip all the time (which is why I was particularly excited to try Victory Grips.) Despite all the callus shavers and Vitamin E oil in the world, I still rip constantly. I ripped on my third CrossFit class ever. I ripped on the the first reps of the first event of 2015 Regionals. I ripped last week.

The “gymnastics” grips killed my wrists and the too thick leather got in the way of my fingers being able to do their job. Natural Grips are too wide for me and don’t last very long. Homemade grips are a waste of expensive tape. KT tape sweat right off. Those elastic things are useless with well used, slippery pull up bars.  Gloves…well…I’m not even going to touch on that embarrassment.

But most importantly, all of these grips messed with my tactile perception. I’m not a brutally strong athlete, so I rely on technique to get through higher skill exercises. If my grip slips a little during muscle ups and I don’t feel it because of a bulky piece of leather, I’m not naturally strong enough to muscle through and save the rep. I need to be able to feel the bar or rings and make necessary adjustments in order to feel safe, especially under fatigue.  I’ve found that ripping is a better alternative to peeling off the rings from 10 feet up, so over the years, I ditched the grips.

That is, until Victory Grips happened to cross my path on a day with some high skill gymnastics. The grips arrived in a cute little drawstring plastic bag, reminiscent of the grip bags I used to use as a low level competitive gymnast. (Victory Grips founder and creator Vic Pelligrino was a competitive gymnast, so it makes sense.)

On first look, the grips themselves look like most other leather gymnastics grips on the market. A closer look shows subtle design differences— they have an additional patch of leather that protects the outside of the palm, and they’re curved to flow with the natural structure of hand.

While Victory Grips look similar to other grips, they feel totally different. Victory Grips are made with ridiculously soft leather, so they immediately melt into your hands with no real break in period. Unlike most leather grips that are buffed to a smooth finish, the part of Victory Grips that faces away from your hands is fuzzy. The texture literally feels like a Labradoodle, and it traps chalk to help keep you secure on the bar.

Our workout consisted of an 18 minute EMOM with three stations: 30 double unders + 8 toes to bar, 3-5 muscle ups, 12 calorie row. Lots of tactile perception to be had in this workout, so I was looking forward to seeing how the Victory Grips would hold up. I didn’t bother to use a wrist band or any sort of wrist protection, because I wanted to see if the grips would destroy my wrists or not. (The things I do for you, dear readers.)

The first thing I noticed was that the grips were oddly helpful with double unders. I tend to death grip my jump rope a bit, but the grips actually gave the handle a nice little place to rest. I was pleasantly surprised at this unexpected perk.

Onto the toes to bar. The leather wrapped around the bar without bunching, but will the straps pull on my wrists and make me feel like my hand is going to separate from my forearm? Nope. No issues.

Muscle ups up next. After a heavy lifting day the day before, my forearms were already taxed. I was kipping, so I chose to avoid the false grip, and repped out three muscle ups. I found I didn’t need to adjust after jumping on the rings. The leather didn’t move around or get in the way of my natural hand position. While the leather reduced some of the tactile perception that I’m used to, the shape of the grip leaves enough open palm to still be able to feel the rings. 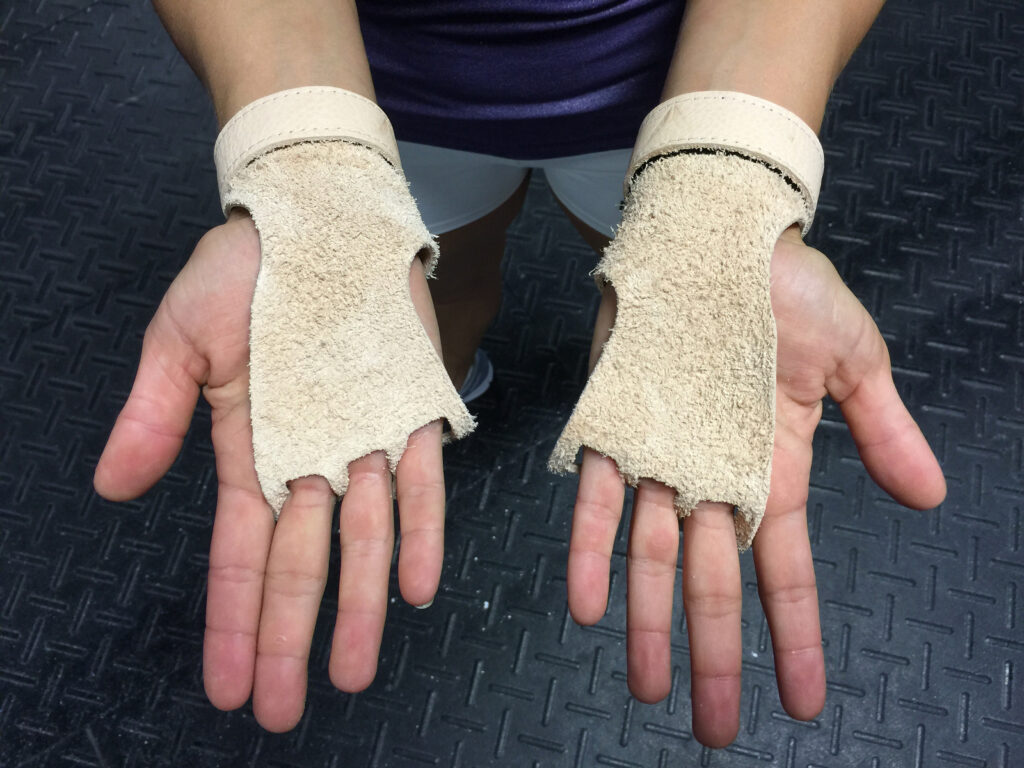 Seeing as I’ve also ripped while rowing (I know, it’s ridiculous), I chose not to take the grips off my fingers during the row. I can’t remember a single thing about the row other than that it sucked, which must have meant the grips didn’t interfere in any way. Exactly what you want.

The grips continued to work well throughout the 18 minutes. I forgot about them entirely during the toes to bar, and found I only thought about them as I started to fatigue on the muscle ups, thanks to that tactile perception thing. Normally when I get tired during muscle ups, I just chalk the crap out of my hands and hold on. Chalking excessively doesn’t help in this situation, so I had to trust the grips to do their job. With a little more time working with Victory Grips, I think I’ll gain more confidence under fatigue.

Let it be known that not only did I never get close to ripping, but that my wrists were spared too!

At $40 a pair, Victory Grips are on the pricier side, but keep in mind that each pair is hand made by Vic in his garage. They come in multiple colors, but I chose to stick with the tan because they’re softer than their dyed counterparts. I haven’t tried them in a workout that combines gymnastics and barbell work, but I’ll update this review when I do. I don’t anticipate any problems though, as these are the first pair of durable grips I’ve ever worn that protected my hands without getting in the way. Annie Thorisdottir and Team Dynamix are big fans too. They’ll be sporting Victory Grips during the 2016 CrossFit Games!