“A monopoly is the antithesis of a marketplace of ideas.”

When famed American economist Thomas Sowell declared the above, I sincerely doubt that he was talking about strongman. That doesn’t stop it being incredibly relevant to our dear sport though. Forty years ago when World’s Strongest Man debuted on our screens, it was unlike anything we’d seen before.

As such, WSM was able to run almost competition free for years, but as the number of strongmen grew, that had to change. Since then we’ve seen a host of competitions, leagues, and federations, all claiming to find the strongest in the world, come and go.

Today strongman fans find themselves in a privileged position, with roughly six companies touting, however carefully, to find the strongest man in the world.

World’s Strongest Man is strongman. If it wasn’t for this equally cheesy and trailblazing TV show from the seventies, It’s unlikely that there would even be a sport — et alone one that is so popular that you can find atlas stones in many gyms worldwide. In fact, without WSM, we’d probably all be powerlifters. For that reason alone WSM deserves to hold a very special place in every serious strongman’s heart.

And for normal people, not the diehard fans and competitors, WSM is often all the strongman they are exposed to. Other shows might get similar airtime on TV these days, but WSM is an institution and brings in the numbers to match. This is especially true in the UK, where watching WSM over the Christmas holidays is more of a tradition held more fondly than mince pies in some households.

Not only does WSM get seen by an awful lot of people, but it makes for brilliant viewing, too. It’s filmed in glamorous locations around the globe and one of the last big multi day events out there. Every moment is a thrill to watch from the qualifiers right the way through to the final, not to mention the production value, which is unparalleled in the sport.

Every young soccer player grows up dreaming of one day playing at the World Cup, and while strongmen might take up the sport a little later, they still have dreams. Those invariably revolve around becoming the official World’s Strongest Man. Leading us onto the least sexy but possibly most important factor: The owners of World’s Strongest Man own the legal rights to that title, and make it very very difficult, if not impossible, for another contest to call their victors the same or anything equivalent.

Even the most prestigious of contests, though, will have it’s detractors, and WSM is no different. In the age of live streaming and quick TV turnarounds, I believe WSM is stuck in the past, and fans find out the full results on Facebook months before anything official is announced. And don’t even try and go watch, if you succeed in getting to the event, expect to see more failed takes on intros than strongman.

The Arnold Strongman Classic is a one-off strongman show held at the Arnold Fitness Expo in Columbus, Ohio, each year. There are several smaller Arnold Classics held all over the world, but this right here is the big one, the one that matters. Since 2002 the competition has enticed the biggest names in strength to come under one roof to compete for both the title and impressive prize money.

Due to the nature of an expo, the entire contest usually takes place on a relatively small stage, resulting in moving events that are often heavier than you see in any other contest but over a far shorter course. That combined with the Arnold’s love of events such as the hummer deadlift, has lead to some strongmen saying that the winner of World’s Strongest Man is the best strongman, but the winner of the Arnold is the strongest. It’s certainly a fun narrative, but not quite true; in my opinion, it’s more a case that the Arnold events allow the athletes to go heavier, often through allowing more supports or by reducing the range of motion. All of this leads to an incredibly exciting show.

In the past the Arnold Classic ran on an invite only basis, with the selectors picking the best guys for the show along with a few token qualification spots. This, however, has all changed this year with every single athlete being required to qualify through the Arnold WorldWide events. Hopefully this will lead to a dramatic increase in the standard of the other Arnold Events, as the stakes of victory go through the roof.

First and foremost, Giants Live is the Official Qualifying tour for World’s Strongest Man. And as such, it is the only guaranteed way to get a spot at the big show, though there are invites offered out to past winners and those who look promising. For the fans that come to watch the Giants Live shows though the qualification process is only a tiny part of the appeal. The real allure is watching the best Strongmen in the world compete for one of the ‘local’ titles alongside thousands and thousands of like minded fans in a huge arena. 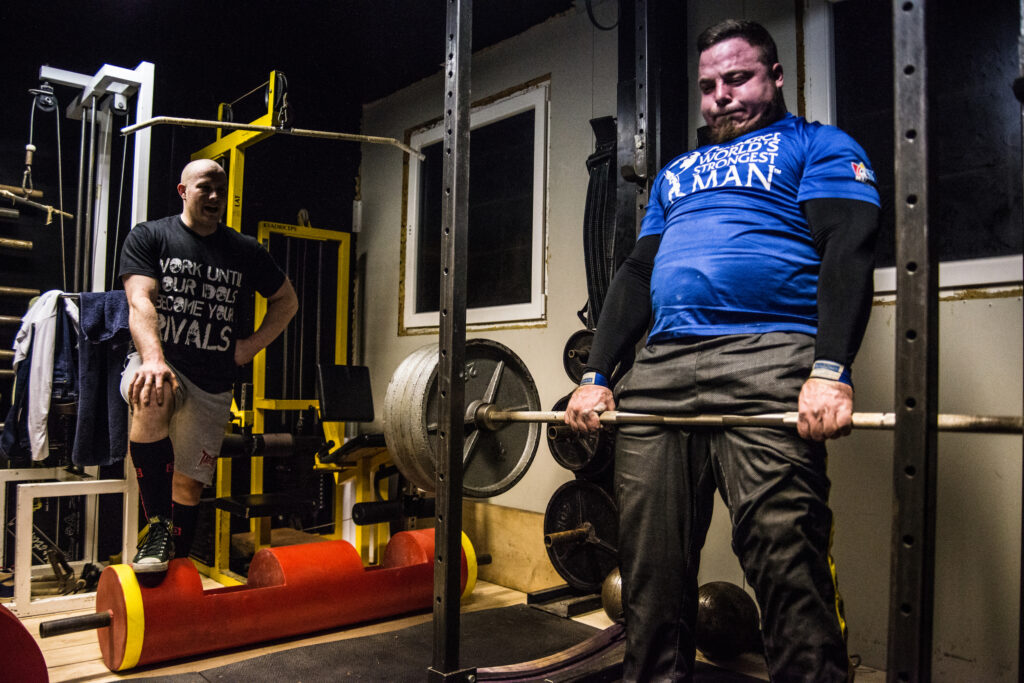 Giants Live has also brought single event shows to the forefront, something that on paper sounds awful for the sport but in reality is just fun. The best example of this is the Deadlift World Championships which was held alongside Europe’s Strongest Man last year. This is where  Eddie Hall showed all 11,00 in attendance that he is no longer human.

I’ve heard many a time that Giants Live is the old boys club of Strongman and that they actively don’t want new guys in the competitions. This might have been true at one point, though I’ve never seen any evidence of that either; nowadays, though, I believe it couldn’t be further from the truth. The events have  even created a clear path from grassroots to arenas for athletes to follow.

Ultimate Strongman is another one of the big UK strongman companies, putting on arena shows in both the UK and overseas. If you’ve ever seen a picture of a strongman rocking a unitard, chances are they were competing at Ultimate Strongman. While they run a host of traditional competitions, such as UK’s strongest man and the Ultimate Strongman World Championship, they are probably best known for the niche shows they host.

My favorite by far is the World Team Championships, where can you see both Lalas brothers deadlifting 800kg on the same bar at the same time. They also support both the over 40s and the younger athletes by hosting both a master and junior World Championship each year. Excitingly we will get to see Big Z (Zydrunas Savickas) competing in the former this year, as he is pushing 42 and hiding it well.

Founded in 2008, the Strongman Champions league is pretty unique in the strongman world: a year long league system in which competitors attempt to accrue enough points to earn an invite to the end of year final. Like World’s Strongest Man, the SCL final is run as multi day event and is often held in a glamorous and exotic locations. They also take prizes very seriously with last years winner walking off the podium with a literal block of gold.

As the SCL has found out, coming up with events for 14 different shows a year can be tricky. Fortunately they aren’t ones to be scared into sticking to the tried and tested events and are known to mix it up a little. Barrel loading in waist deep water, shot put, natural stone pressing, and even boat pulls were all events in 2016. Depending on your views this either detracts from strongman as a sport or makes the sport more fun, but for the record I think it’s brilliant.

Having been running consistently for nearly nine years now, the SCL has provided strongmen with regular opportunities to ply their trade. The benefit of this can not be understated, especially for athletes who are desperately in need of some time on the platform. Whether that’s the stars of the future or grizzled veterans who want to see if an injury will hold up to the test of competition. Another less appreciated aspect of these regular events is that they can provide regular income for an athlete who would otherwise have to be working to support their goals.

The World Strongman Federation is very much in it’s infancy at the moment, having only had their debut championship so far. This was held in Mumbai, India and won by the incredible Mark Felix. They have since released their full competition schedule for 2017 and it includes contests the world over. Which might be frustrating for the athletes who have to travel but is brilliant news for the growth of the sport.