Build Beefy Traps and Shoulders With the Upright Row

Bad for your shoulders? No. Good for gains? Absolutely.

Both consistency and variety are important when it comes to strength training. Basic movements such as the squat, press, and deadlift are practiced time after time for the sole reason that they’re irreplacable when it comes to building strength. However, you can also get stronger by bringing a new tool into your training program.

The upright row is a unique exercise. It provides some novelty to a well-practiced movement pattern, it is accessible whether you train in a gym or at home, and lets you train your back without straying too far from the foundational pulling pattern found in rows in general.

By adding the upright row into your workout, you can heat things up in your training and enjoy the best of both worlds — extra technique practice for your pulls and some much-needed variety to your barbell training.

How to Do the Upright Row

This article will cover the barbell upright row specifically, which is a strict weight lifting movement that targets the upper body. By pulling the barbell vertically, you can train upper body coordination for sport performance and trash the muscles in your upper back at the same time. 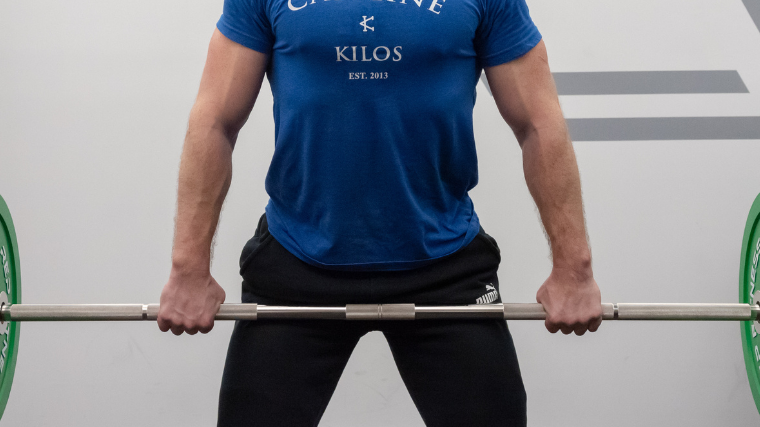 The upright row is typically practiced with a shoulder-width grip, but you can adjust it slightly to bias certain muscles over others. Grab the bar close to target your shoulders, and widen it out if you want to emphasize your traps.

Coach’s Tip: The strict technique of the upright row might be humbling if you’re used to having a lot of weight on the barbell. Start with an unloaded bar to refine your technique. 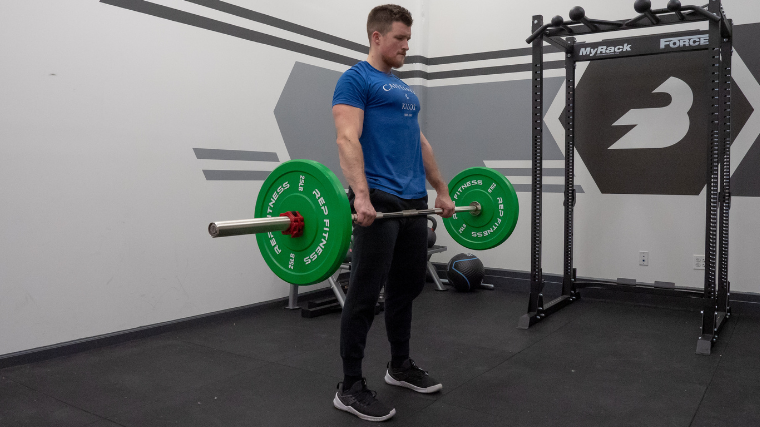 Stand with the barbell held at your waist. Keep your arms straight and relaxed, and your shoulders tight and pinched back. Point your knuckles down towards the ground. Squeeze your quads and glutes to maintain rigid legs for the duration of the set.

Step 3 — Pull Your Elbows Up

While keeping your knuckles pointed down to the ground, bend your elbows and pull them straight up. Retain the barbell close to your torso and pull until the bar reaches roughly chest height. 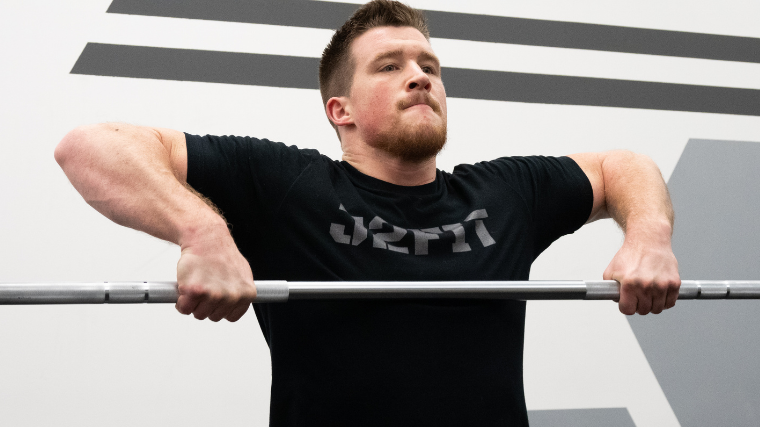 Coach’s Tip: Success is dependent on a strong and tight lower body. Make sure to keep a tall posture and contracted core when the barbell is traveling upward.

Benefits of the Upright Row

The upright row is an incredible exercise to keep in your toolbox for productive strength training. It’s a simple movement that stimulates muscle growth and improves pulling mechanics.

The strict upright row requires rigorous muscle involvement. Both the large and small muscles of the upper body work in conjunction to complete the lift. As such, the upright row is great for building upper body pulling strength.

Even though the upright row is primarily an upper body exercise, your core is still greatly involved in maintaining posture. Maintaining a still, upright torso when leveraging the weight upward requires tension and stability in the abs, glutes, and lower back. This will keep the core solidified for a successful lift.

Muscles Worked by the Upright Row

When performed properly, the upright row will slay your upper body. Muscular activation in this lift occurs from the moment you move the barbell. Read below to identify which muscles come into play.

The traps pull the barbell upward in the lift. The shrugging motion warrants a high potential for power output. The specific motion of the upright row allows the traps to take over in driving the barbell upward.

All three muscle heads of the deltoids (anterior, middle, and posterior) contribute to the upward motion of the upright row. The shoulders are responsible for aggressively contracting and pulling the barbell upwards towards your chest, particularly in the second half of the pull.

The fast bending motion of the arms is where the biceps work in the upright row. The biceps will not necessarily steal the show, but the movement could not be completed without their contribution. Since you’re bending your elbows to pull the bar close to your body, the biceps and brachialis act as synergists in the upright row.

The upright row requires a rigid posture. The lift begins with the weight loaded anteriorly, which means that the weight must be pulled up and back to keep it close. In order to facilitate this, the upper back contracts to pull tight and close.

The core is the supportive foundation for the upright row. Your core helps to lock in the starting position and keep your torso still to ensure that the correct muscles are worked in the lift.

Who Should Do the Upright Row

The upright row is a widely-applicable exercise. Anyone looking to get a thorough shoulder and upper body workout can never go wrong with practicing upright row. These are a few examples of athletes who may consider making this movement a staple exercise.

Bodybuilding athletes typically include the upright row to work their shoulders. This movement isolates the shoulders, which stimulates muscle recruitment. As the barbell is loaded up, it can become an effective exercise for total shoulder hypertrophy.

The upright row should be included in weightlifting accessory training to target the vertical bar path of the snatch and clean. While Olympic lifting trains primarily total body power, the upright row can help you isolate your upper body mechanics. Consistent practice of this exercise will help guarantee good posture in your Olympic movements.

The upright row is an exercise that benefits overall CrossFit strength and performance. Training the upright row solidifies the posture of the upper body, which is transferred widely to other common lifts found in CrossFit, such as power cleans or high pulls.

The upright row is a versatile training tool that can be customized to meet your personal goals by adjusting how you program it. Read below for programming information related to specific areas of improvement.

The barbell upright row can be used as a tool for increasing upper body strength. This is achieved through performing the exercise at a heavier weight with fewer repetitions. The movement itself is very limiting to the weight load, so in this case, “heavy” is relative.

For upper back strength, perform 2 – 4 sets of 5 – 8 repetitions with an emphasis on pulling hard each time.

This exercise is often performed in weightlifting when athletes are looking to improve their bar path. In this case, greater repetitions at a moderate weight are most likely going to be best. Practicing the lift at a higher volume will increase familiarity and coordination.

To refine your pulling technique, try out up to 4 sets of 10 repetitions each.

When training for muscle growth, the upright row should be performed with higher repetitions at a light to moderate weight. This way, the muscle can be truly isolated for high volume training to overload the tissue.

To gain muscle with the upright row, perform anywhere from 3 – 5 sets of 12 – 15 repetitions total.

The upright row is a basic movement that can be practiced with virtually any type of resistance. These are only a few examples of the many ways that the upright row can be modified for your specific training style.

The kettlebell upright row can either be performed with one or two kettlebells. If you’re using a single bell, grab the handle with both hands and hold the weight at your midline. Th close grip will challenge shoulder strength and range of motion. If using two kettlebells, one in each hand will allow you to access a more free range of motion for your shoulders.

The snatch-grip upright row uses the barbell, but the grip is taken out wide. At the start, the barbell should rest in your hip crease with two straight arms. This variation will directly supplement your snatch technique, and also isolate and strengthen the traps.

In order to perform the single-arm upright row, go for a dumbbell instead of the barbell. This variation of the lift focuses on unilateral strength. This technique will help strengthen each individual side of the body separately to improve overall bilateral performance.

If the upright row is not quite for you, you can still get some of the benefits by performing movements that work a similar movement pattern.

The traditional barbell row works many of the same muscles from a different angle. Rather than rowing with a tall torso, hinging at the hips allows you to pull the bar up to focus on your lats instead. The barbell row might be more appropriate for you if you want to build up back width.

The inverted row is a bodyweight exercise. By hanging from a fixed handle — either a barbell in a squat rack or gymnastics rings — you can work the entirety of your back musculature without needing to use heavy weights.

The difficulty of this movement can be adjusted by changing the angle of your body. The more horizontal the body is to the ground, the more difficult the pulling action will be.

The snatch pull involves using power from the lower body to row the barbell upward. This exercise mimics the pulling portion of a snatch. In this movement, the lift starts on the ground.

Perform a snatch deadlift and finish with leg drive at the top to elevate the bar — this will allow you to train the same tall pulling pattern with heavier weights than you’d be able to use in the strict upright row.

Most people recognize the barbell row as a staple strength training exercise, but there are many underutilized pulls out there, and the upright row deserves its own recognition. The unique posture and pulling pattern of the lift challenges your upper back in a way that you can’t achieve by most other free-weight pulls.

Despite some misleading claims that the upright row is dangerous for your shoulders, it can be a safe and effective way of building your upper back and developing good pulling technique for Olympic lifting or CrossFit. Introducing the upright row into your weekly routine might just be the breakthrough you need in your strength pursuits.

If you’re still not sure about the upright row, that’s okay. Here are a couple of common questions and answers that will hopefully put your concerns to rest.

Why do my wrists sometimes bend at the top of the pull?

You may unintentionally flex your wrists as you pull the weight if the load is too heavy for your shoulders or traps. While some wrist flexion is okay at the very top of the movement, if you find yourself bending your wrists excessively, lower the weight.

What if I’m experiencing pain in my shoulders at the top of the pull?

Stretching the shoulders without weight in combination with practicing the movement with very light weight should help you adjust to the technique required.