AllMax Aminocore BCAA Review — Do You Need These B Vitamins?

AllMax is a supplement company that’s based in Nevada, and they sponsor a variety of bodybuilders and figure athletes in an effort to corner that market. They sell fat burners, mass gainers, and protein powders — check out our review of their whey isolate, IsoFlex — but we wanted to take their Aminocore branch chain amino acid supplement for a spin.

One scoop is 5 calories and delivers a very large 8.18 grams of BCAAs. (Most companies give you 5 grams per scoop.) The BCAAs are in a strange ratio; while you’ll typically find them in about a 3:1:1 ratio of leucine, valine, and isoleucine, AminoCore took a 9:6:5 ratio.

Then there’s 100 percent of the recommended daily intake of Vitamin B3 (niacin), B6, B9 (folic acid), and B12. There’s also 50 milligrams of alpha ketoisocaproic acid, or a-KIC, an intermediate in the metabolism of leucine. I’ll talk a little more about what these ingredients do in the next section.

Finally, there are the “other ingredients,” which are mostly flavorings: citric acid, malic acid, natural and artificial flavors, and sucralose, which is also called Splenda®. There’s also purple carrot extract for coloring and sunflower lecithin, which is meant to improve mixability.

Let’s start with the BCAAs. They’re linked to muscle retention, endurance, and focus during workouts. Again, they’re in a very strange ratio of 9:6:5, so while it’s heavier on the leucine than on other amino acids, which is normal, it’s relatively higher in valine than a standard BCAA supplement. In that regard, it’s a little bit like MusclePharm’s 3:1:2, and the extra valine may make it better for focus and endurance.

There’s a theory that since B12 helps with the synthesis of methionine, it can help when you’re under conditions of increased protein synthesis, like you are during and after a workout. But right now, that theory isn’t supported by evidence.

The other vitamins are antioxidants and may help with growth hormone, muscle retention, and focus, but again, this is only if you were already deficient.

What about the a-KIC? On its own it probably doesn’t do anything for workouts, but some studies have shown that it may help with high intensity exercise when combined with other amino acids. However, the evidence is decidedly mixed.

That’s extremely cheap. For some context, 11 cents per gram of BCAA is considered very cheap. AminoCore is one of the cheapest BCAAs I’ve ever seen.

It tastes great! I was surprised because I picked up the Fruit Punch Blast flavor, and usually Fruit Punch tastes just like maraschino cherry and watermelon candy. But AminoCore’s Fruit Punch tasted quite a lot like grape as well.

AllMax’s Aminocore is a pretty solid product: it tastes great, it provides way more BCAAs per scoop than most brands, it has no soy or artificial dyes, plus you get a hit of B-vitamins.

It still has sucralose, which some people try to avoid, and it’s important to note that the B-vitamins, while important for overall health, probably won’t “boost” your workout.

But for a product this cheap, there’s little to complain about. 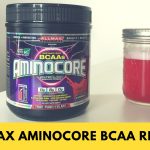