Should You Take Vitamin B12 Before a Workout?

If you’ve tried as many pre-workouts and branch chain amino acid powders as we have, there’s a decent chance you’ve come across a sports supplement with Vitamin B12 in it.

You probably know that the only dietary sources of Vitamin B12 are animal products or supplements, and you might have a feeling that B-vitamins are important for energy production. So, taking a shot of B12 before a workout must help you produce energy for the workout, right?

This probably isn’t the case, but there are other reasons why a B12 supplement could help a workout. 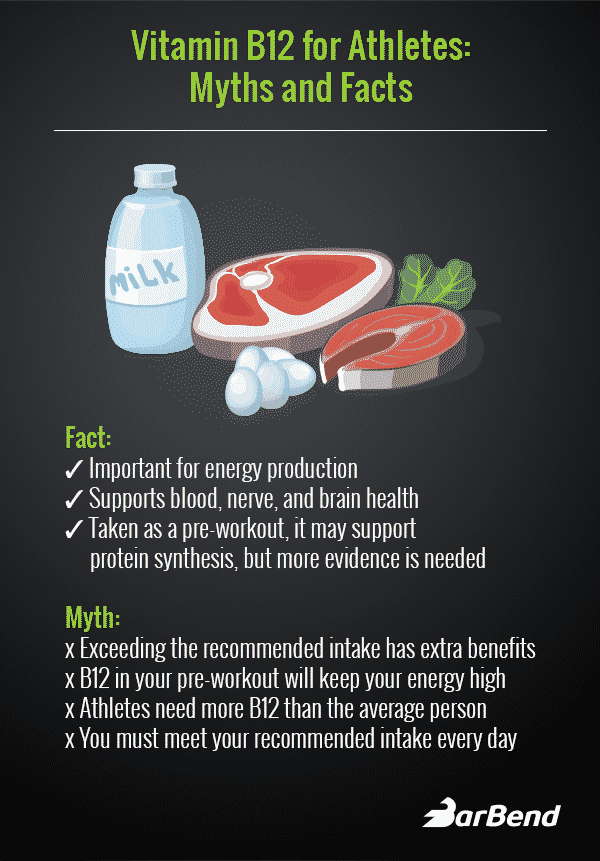 So What Does Vitamin B12 Do, Again?

If you don’t get enough Vitamin B12, symptoms start with an overall sense of weakness and can proceed to numbness or tingling in the hands or feet, memory loss, cognitive decline, and anemia. The good news is the symptoms are reversible once you restore your B12.

“Vitamin B12 plays a role in a number of different processes in the body, including energy production, amino acid and DNA synthesis, blood cell formation, and brain and nerve cell function,” says Bill Willis, PhD, a biomedical scientist and a researcher at Examine.com. “Getting enough B12 may also help to minimize risk for cardiovascular disease and it can prevent certain cancers too — it helps to prevent inappropriate gene expression that can lead to cell transformation and cancer.”

OK, so it’s healthy in the longterm. But is that the only reason it could help my workouts?

“If you have a deficiency, it will absolutely affect workout performance,” says Trevor Kashey, PhD, a nutrition scientist and consultant. “If your normal is crappy and it brings you back to normal, you’re going to feel like you’ve improved your performance but really you’ve gone from negative one to zero.”

“If you continue to take a vitamin and it’s helping you more and more, I don’t think that means you’re taking more than you need,” says Kashey. “It probably means you haven’t gotten enough.”

Some people theorize that if you’re an athlete, then you need more B vitamins than the average person, but Kashey points out that even if that were the case — and he’s not convinced it is — athletes are going to be eating more calories (and therefore, almost certainly more nutrients) than the average person anyway. So this means it doesn’t look like athletes need to supplement with a zillion percent of the RDI of B12.

But There’s This Theory…

This is a reason why people take branch chain amino acid supplements, to shift the balance toward protein accumulation by boosting protein synthesis, slowing protein breakdown, or doing both.

“Because B12 can’t be made in the body and is required for the synthesis of the amino acid methionine, it is often included with BCAAs under the assumption that requirements will increase under conditions of increased protein synthesis,” says Willis. “While this argument looks great on paper, it has yet to be established that B12 levels in those without a deficiency are ever a bottleneck for protein synthesis.”

If you’re wondering why you see B12 in your BCAAs, this is probably it. But the evidence isn’t solid enough to definitively state that this is why you should take B12 with your pre-workout. 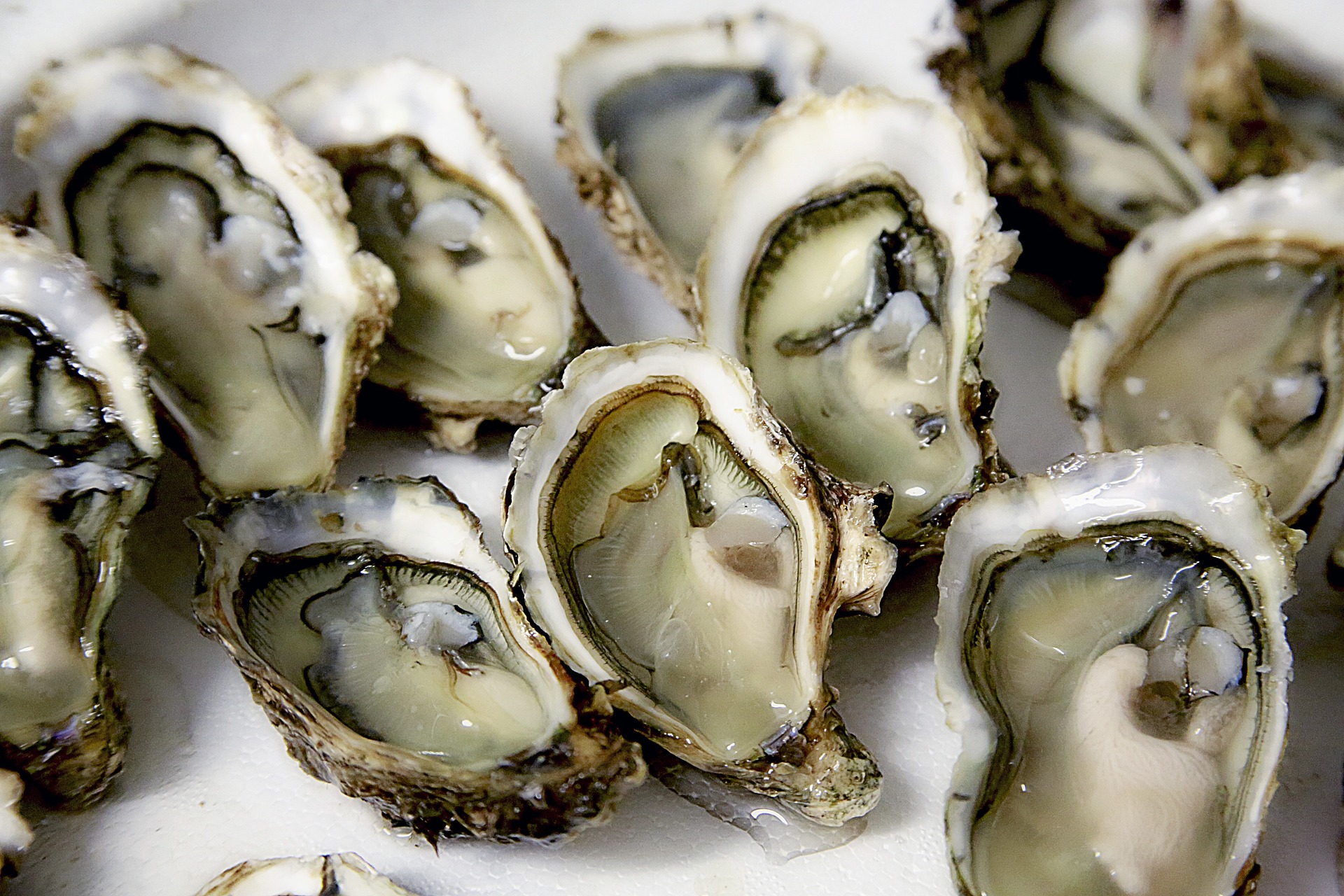 How Much Vitamin B12 Do I Need Then?

Probably less than you think.

The National Institute of Health recommends about 2.4 micrograms of Vitamin B12 per day for anyone over the age of 14, with slightly higher recommendations if you’re pregnant (2.6mcg) or lactating (2.8mcg).

[You absorb less Vitamin B12 as you age, so it’s one of these 4 Nutrients You May Need More of After 50.]

Vitamin B12 is only found in animal sources. Far and away the best sources are clams (they have 84 micrograms per three-ounce serve) and liver (70 micrograms per three-ounce serve). But it’s also high in fish (three ounces of salmon has 4.8mcg, the same amount of tuna has 2.5mcg), eggs (six of them will provide 3.6mcg), beef (2.4mcg in three ounces) and milk (one cup has 2.4mcg).

Unless you’re eating plenty of animal products, those numbers might make you think that you’re not hitting your RDI as much as you should. But remember how liver was so much higher than other sources? That’s because animals store B12 in their liver, and so do humans. In fact, according to the Mayo Clinic, the human body stores several years’ worth of vitamin B12 in the liver, which is why low levels are so rare.

That doesn’t mean you never have to think about your B12, particularly since a few different factors, like age and gastrointestinal issues, can affect how well we actually absorb the B12 we consume. But it does mean that if you’re eating a varied diet, B12 intake probably doesn’t need to be that high on your list of priorities.

We’re not about to say that no one needs to supplement. It can be hard, inconvenient, expensive, or time-consuming to nail your RDI of every single vitamin and mineral you’re meant to eat.

But there are probably micronutrients that are more important, and harder to get, than B12. Studies have found that you’re far more likely to be low in B12 if you’re over 60 and even then, only about 6 percent of people are deficient. Compare that with an estimated half of all Americans being deficient in Vitamin D and magnesium and it becomes clear there are other nutrients that deserve your attention.

Should you experiment with a supplement anyway, just in case it makes you feel better? The consensus has always been that it’s next to impossible to have too much B12 — one study showed no ill effects from regularly taking almost a thousand times the recommended daily intake. However, a recent study published in The Journal of Clinical Oncology suggests that long-term supplementation of 55 micrograms (about twenty times the RDI) or more could increase the risk of lung cancer.
This is very new research and definitive conclusions on the matter are a long way off, but it remains true that there’s no need to try to “supercharge” your B12 intake with extremely high doses. It’s smart to try to hit your RDI, and if that improves your energy levels, it probably means you weren’t having enough — not because taking “extra” B12 makes you feel awesome.

Bozian RC, Ferguson JL, Heyssel RM, Meneely GR, Darby WJ. Evidence concerning the human requirement for vitamin B12. Use of the whole body counter for determination of absorption of vitamin B12. Am.J.Clin.Nutr.1963;12:117-29.

Fenech M. Folate (vitamin B9) and vitamin B12 and their function in the maintenance of nuclear and mitochondrial genome integrity. Mutat.Res.2012;733:21-33.