The Benefits of Eggs for Athletes — Cholesterol, Nutrition, and The Healthiest Way to Cook

Hailed for protein, vilified for cholesterol, lauded for their bioavailability, ditched for a link to strokes, it’s been a pretty wild ride trying to figure out the benefits of eggs.

You know they’re a cheap source of complete protein, meaning they contain the full spectrum of amino acids — in fact, eggs may be the most bioavailable and easily absorbed form of protein you can eat. (Eggs are, after all, meant to contain everything necessary to create life. The life of a chicken, sure, but you get the point.)

Here we wanted to clear up some of the most common health concerns about eggs from the perspective of strength athletes. You might find there are more goodies in your omelette than you knew. 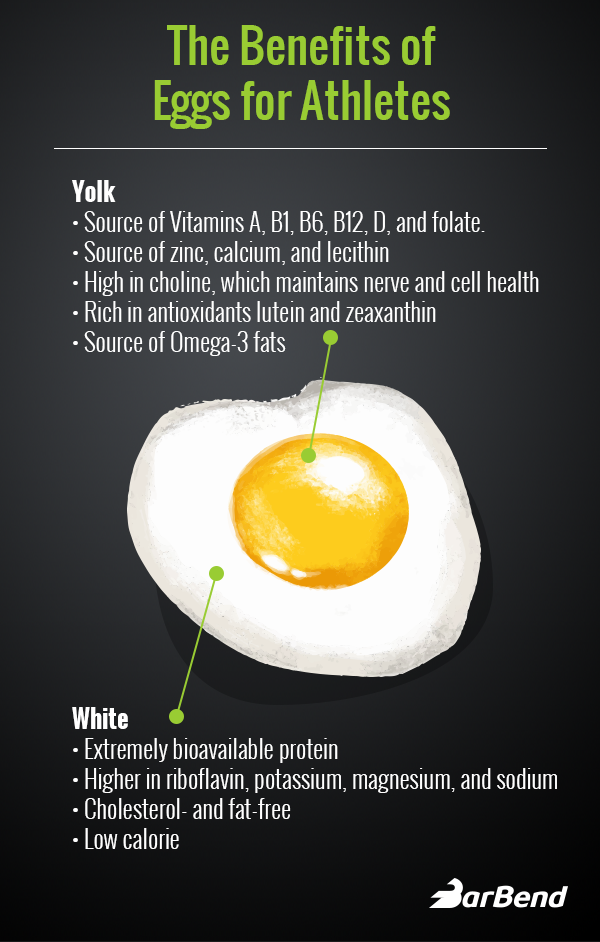 First, let’s clear up the obvious question: no, eggs won’t give you a heart attack.

Cholesterol is actually an important nutrient for hormone production, including testosterone, and it helps the liver to make bile so that you can absorb and digest fats and fat-soluble vitamins.

Some research has shown that if anything, eggs only increase the HDL (or “good”) cholesterol in your blood. Other studies have shown eggs have no effect on HDL or LDL cholesterol levels, and a meta analysis of a group of studies conducted between January 1966 and June 2012 found that there was no association between egg consumption and cardiovascular disease or stroke. (That said, that particular study only looked at consumption of one egg per day, and it did find an association with heart disease for people with diabetes.)

We’re also not a hundred percent sure that blood cholesterol is linked to heart problems; seventy-five percent of Americans hospitalized with heart attacks between 2000 and 2006 (about 137,000 people) had normal, “desirable” blood cholesterol levels.

In any case, the U.S. Government’s own Dietary Guidelines Advisory Committee voted in 2015 to stop recommending that people limit their cholesterol consumption. These days, the science is considered shaky; there’s just not a strong enough link between dietary cholesterol and heart disease.

Brunch so pretty it looks like a Renaissance painting. (Just check out that chiaroscuro!) 📷: @c.r.a.v.i.n.g.s #forkyeah

So they’re a cheap and safe source of protein, but are there more benefits for athletes?

Eggs are typically associated with B-vitamins, and they’re a great source of vitamins B1, B2 (riboflavin), B6, and B12. Eggs also contain a lot of choline, a “vitamin-like” essential nutrient that’s similar to B-vitamins and is sometimes used by athletes to delay fatigue in endurance sports. (It’s also been linked to lower incidences of certain mental illnesses.)

“A lack of B-vitamins, and choline is sometimes thrown into this group as well, definitely does impair one’s ability to perform, but eating a surplus of them doesn’t necessarily give benefits beyond what is achieved with a decent diet all around,” says Kurtis Frank, the research director of the independent nutrition research organization Examine.com. “While eggs are a great source of these vitamins, choline is really the only one where one may go out of their way to paint eggs as the absolute best source of it.”

Eggs are also an excellent source of zinc, which optimizes testosterone production, and a pretty good source of magnesium, which is linked to improved intra-workout recovery and better quality sleep.

What people don’t often associate with eggs is the abundance of lutein and zeaxanthin, antioxidants that are concentrated in the yolk.

“The lutein and zeaxanthin content in the yolk is surprisingly high relative to other food products, and may be a reason to recommend eggs over other foods,” says Frank. “Though they aren’t necessarily athlete compounds, they’re strongly related to eye, skin, and general health.”

The Healthiest Way to Cook Eggs

Is there a “best” way to cook eggs? Surprisingly, the temperature at which eggs are prepared can have a pretty meaningful effect on its nutrition.

“Frying the egg is probably going to diminish the antioxidant value compared to something like steaming,” says Kashey. “The lower the temperature of the cooking method, the better, at least in terms of preserving antioxidant capacity. The antioxidant levels are cut in half or more when they’re boiled, fried, or microwaved, so if that’s a priority I would opt for lower temperature cooking methods.”

Kashey jokingly suggested that a sous vide egg would probably have the highest antioxidant content before admitting that’s a pretty unrealistic idea. (Funnily enough, there are plenty of recipes out there for slow cooked frittatas.) If you’re not so patient, steaming eggs or just cooking ‘em slowly should help to preserve more benefits.

But don’t eat them raw. While some fitness folk insist the salmonella risk is overblown, more of the protein is absorbed when you cook it.

“One of the best attributes of eggs is that they are easy on the wallet; a very affordable source of important nutrients. These super foods not only make you feel full longer but they also pack a wallop of protein. Eggs are rich in amino acids, choline and vitamin D, all of which are essential to healthy muscle growth. Researchers say that eating eggs in the morning can reduce your daily cravings for fatty foods by up to 400 calories, making eggs useful for fat loss efforts too!

Yes, the yolk has cholesterol, but it also houses the majority of nutrients contained in the egg, so you definitely want to eat it. Let’s not forget that cholesterol is used by the body to produce testosterone and other hormones, which makes it helping in building muscle as well. Dollar for dollar, eggs are one of the most affordable, nutritionally sound, bioavailable, complete sources of protein on the planet.”

Lots of protein, a ton of micronutrients, great for athletes, and surprisingly low-calorie — six large eggs doesn’t even crack 500 calories — eggs can and should have a place in any athlete’s diet.

Want even more info on eggs? Dr. David Perlmutter and Josh Trent of Wellness Force Radio go in depth in the podcast below: