Anderson Squat – How It Benefits Your Training

Squatting strength and performance is arguably one of the most vital attributes for strength, power, and functional fitness athletes. Often, athletes may find themselves and their squat performance becoming stagnant. 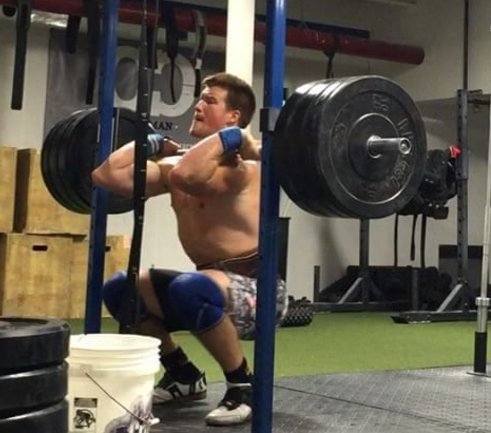 This squatting variation is a highly effective means at increasing starting strength, rate of force development, and overall performance.

In this article, we will discuss the Anderson Squat and why nearly every athlete could benefit from adding them into their current accessory lift routines.

The History of the Anderson Squat

Named after Paul Anderson, an American weightlifter, powerlifter, and strongman. Paul was a World Champion, Olympic Champion, two time U.S. National Champion, set 18 American Records, and 8 World Records, and is one of the pioneers in today’s strength sports. Paul’s top lifts (official and unofficial) are listed below, many of which were achieved through a home-made training regimen, one that often included lifting 55-gallon cement-filled drums, iron wheels, and more.

One of Paul’s common squat lifts was the Anderson Squat, also referred to as “pin squats”. Paul felt that the squat was one of the most vital strength building exercises to do, often squatting all day, every other day.

Here’s why every lifter can benefit from  the Anderson Squat.

Many coaches and athletes advocate the Anderson Squat as a great supplemental squatting exercise to do following primary squat lifts. While the lift itself can be very effective at increasing strength and performance in the squat, it is often accepted to perform these in addition to regularly squatting. Due to the Anderson Squat omits the stretch-shortening cycle (which is why it is effective at increasing strength), more dynamic squatting movements that include both eccentric, concentric, and a velocity component must be done to I’ll maximize the application to most sports.

Regardless of the sport, most strength, power, and fitness athletes can benefit from including Anderson Squats into their current assistance training program.

Postural breakdowns in the squat and front squat can limit an athlete’s ability to squat heavier, move faster, and react quicker (catch in weightlifting and/or most athletic endeavors). Be increasing a strength and postural awareness at a certain breakdown point in the squat can help to improve neuromuscular awareness and muscular force development. When combined with consistent squatting (variations that include the stretch-shortening cycle), lifters can further diversify their squat strength and performance.

Additionally, Anderson Squats are a great way to teach new lifters (or experienced ones) proper alignment and tension at specific points in a squatting movement.

Anderson Squats allow lifters to address the specific angles/depths of their sticking points by setting squat height at or just below the sticking point. The ability to isolate the specific joint angles is key at busting through and continual growth in one’s squat. It is important to note that strength is angular specific, meaning that Anderson squats set at a particular depth will increase concentric strength only around that specific point, further showing the necessity to continue to squat to full depth in other squatting exercises.

The ability to move loads from a deadstop is key to most strength and power sports. Although the squat specifically starts with an eccentric component in both powerlifting and weightlifting (catch of snatch or clean), their can be highly transferable strength adaptations from lifters performing Anderson Squats. Increased starting strength allows for increased force production due to decreases reliance on the stretch-shortening cycle, which is negated in this lift; much like pause squat variations (however the stretch-shortening cycle has been shown to be present up to 5-8 seconds in the pause).

While nothing can replace a steady diet of squatting, coaches and athletes can implement unique squat variations, like Anderson and/or Zercher squats to better facilitate muscular growth and development over time. The ability to isolate specific limitation in either strength, postural stabilization, and/or technical awareness can be key to unlocking new progress and personal records.