Beast Sports Nutrition is based in Boca Raton, Florida, and while their products focus on bodybuilding goals like muscle gain and fat loss, they sponsor a couple of powerlifters as well. The sell some pretty unusual products, including a thermogenic supplement that’s intended to make your body burn calories by sweating, and Creature, their blend of five creatines.

What do they bring to the table? Let’s take a closer look.

These are proprietary blends, so we don’t know exactly how much of each ingredient it contains, but the “Creature 5x Complex” is 4 grams of five creatines: creatine monohydrate, di-creatine malate, creatine anhydrous, Crea-Trona® (a kind of buffered creatine), and creatine gluconate. I’ll discuss these in more detail in the next section.

The rest of the ingredients are mostly natural and artificial sweeteners and silicon dioxide, an anti-caking agent. Note that we tried the citrus flavor which is naturally colored with turmeric.

Here’s a quick summary of the creatines:

Beast claims that some of these, like malate and gluconate, “allow for better creatine entry into muclces” or increase “solubility and absorption.” It may be true that some of these dissolve more easily in water. But there’s no evidence that they are more effective. The only real, published, peer reviewed study I found was performed on buffered creatine, and it firmly concluded that it wasn’t more effective at increasing muscle creatine or improving performance.

It may be true that these unusual kinds of creatine — malate, gluconate, and buffered — could be easier on the stomach than monohydrate. Some people experience cramps when they consume regular monohydrate and there are anecdotal reports that these symptoms are reduced with these alternative forms of creatine. But this product still contains monohydrate, so you may still experience some cramps if you take it.

What about the creatine optimizers? Beast doesn’t really provide reasons as to why they’re so good at optimizing creatine but most of them, like the banaba leaf, chromium, and cinnamon, are linked to lower blood sugar and/or better insulin sensitivity.

This is pretty unusual, since a lot of people try to spike their blood sugar when they take creatine because it could help with muscle retention. Beast may be going in the other direction because better insulin sensitivity means you do a better job of absorbing nutrients from their food, so it could help you absorb the creatine better.

When taken as a supplement to improve insulin sensitvity, chromium is usually taken at 1 milligram, banaba extract at 1 gram, and cinnamon extract at 250 milligrams. Beast contains 50 micrograms of chromium and under 90 milligrams of the other ingredients — way less than that. That’s not to say they won’t have some effect on your blood sugar, but it’s probably quite mild.

You can pick up 60 servings for about $22, which comes to 36 cents per scoop or 9 cents per gram of creatine. That’s pretty pricy when compared to plain creatine monohydrate, but if you like the idea of trying different kinds of creatine and you think the optimizers could be useful, then you might find this to be very reasonably priced.

I tried the Citrus flavor, which is artificially flavored and sweetened, and I found it to be pretty darn tasty and reminiscent of lemon-flavored soda. That said, because it’s naturally colored with turmeric, there was a very, very mild turmeric flavor in there too. I didn’t mind it, but if you absolutely can’t stand that flavor then you may turn up your nose.

While there’s not a ton of evidence supporting the unusual forms of creatine and the optimizers are dosed a little low, it’s a remarkably cheap product. It’s a few times more expensive than regular monohydrate but for less than ten cents a gram, I was still surprised by the price. If you like the idea of consuming many kinds of creatine — particularly since it may be easier on the stomach — then this isn’t a bad bet, but maybe don’t expect them to provide vastly superior results. 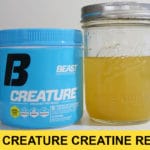