Why You Should Do More Bulgarian Split Squats

Single-leg work often falls by the wayside as schedules get tight, time gets short, and lifters want to chase, well, the lifts. Who’s got time for single leg accessory work when there are PRs to PR?

That’s always been the Bulgarian split squat’s greatest challenge: that it’s seen as just an accessory exercise. Well, that, and the fact that it’s monstrously difficult.

But the BSS has a space in every lifter’s arsenal and if you’re a recreational lifter, it can even be your primary lower body exercise.

“For overall strength and size the Bulgarian split squat is, in my opinion, one of the best exercises,” says Jordan Syatt, an IPA Powerlifting World Record Holder in the deadlift, Westside Barbell-certified strength coach, and owner of Syatt Fitness. “It’s got great range of motion, huge recruitment of the quads and glutes, and it’s terrific for building core strength and stability.”

For Syatt, one of his pet peeves is the notion that the only way to get bigger and stronger is through back squatting. A lot of people who back squat – not all of them and not always, but a lot of people – wind up having hip and back pain. The BSS isn’t just a good alternative because it necessarily (due to being a unilateral exercise) place less load on the spine than bilateral squats.

Some studies have also shown that the exercise does a better job of recruiting the hamstrings and gluteus medius and may even result in a slightly higher testosterone boost than bilateral squats. (This could be because of the increased stability demands, but strength and conditioning researcher Dr. Bret Contreras has suggested that it’s because the rear leg is actually pretty active during this exercise – his own EMG experiments have showed very high hip flexor muscle activation during the Bulgarian split squat.) 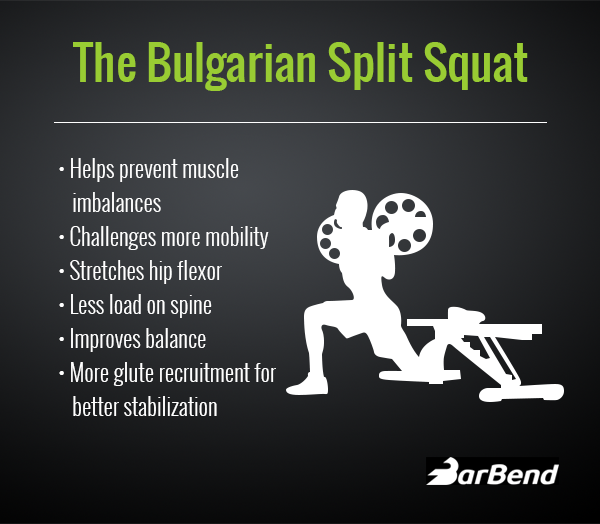 For folks who like to lift heavy, placing the barbell across the back is the best way to squat with as much weight as possible, assuming there are no pre existing injuries or mechanical issues that will prevent it. On the other hand, holding the barbell in the front rack position will provide a greater challenge to the core muscles and the upper back, as is the case with front squats.

Want to improve your grip? Hold some heavy dumbbells or kettlebells instead. Want a bigger range of motion? Try elevating the front foot a little. Want more lateral stability? You can half load the movement by holding a weight in just one hand, or holding one dumbbell in the front rack and one by your side. The Bulgarian split squat is incredibly versatile and can pretty easily adapt to your training goals while helping to ensure that you don’t accrue muscle imbalances in your quest for new PRs.

“The most common form problem is the front foot,” says Syatt. “The heel of your working leg shouldn’t come off the floor. If you’re pressing through your toes, that’s putting your knee at a major risk of injury. If your heel comes up, you’re fucking it up.”

He recommends making sure that the middle of the foot is directly beneath the knee when in the hole. Another important way to ensure knee health is to make sure it doesn’t cave inward: it should be pushed out in a manner that will keep it in one line with the toes.

“A lot of people will also lean their torso really far forward as they’re coming forward, especially when they’re holding dumbbells on each side, so their chest is almost touching their knee,” he adds. “You want an upright posture. If I’m standing in front of you, I should be able to read the letters on your t-shirt.”

How to Implement Them In Your Program

You don’t want to split up your unilateral and bilateral training days – combining both movements will yield the best results.

“It’s situationally dependent,” says Syatt. “You can train legs and include Bulgarian split squats three days a week if you’re manipulating volume and intensity properly. You don’t want to max effort every day. Some days I’ll do them really heavy for four sets of five, other days I might end my workout with constant tension goblet Bulgarian split squats for three sets of twenty per leg.”

Here are a couple of sample leg workouts to give you some ideas – the first has Bulgarian split squats as the primary exercise, the second as an accessory, and both end with a circuit of three exercises.

We all know that exercise variety is important to avoid boredom with your workouts, but including this exercise won’t just shake up your routine. It’ll provide a solid boost to your balance and core stability and strengthen your quads, hips and glutes– all while reducing the load on your spine.

“Just don’t rush it,” says Syatt. “A lot of people like drop into the hole too quickly or they try to add too much weight. Start slow and focus on controlling the movement. A three-second concentric is better than a zero-second concentric.”

Oh, and get ready to be sore.