Chin-ups Vs Pull-ups: Why the Difference Is Important

The chin-up and pull-up are both incredibly useful upper body exercises and should make into every athlete's program!

In the gym setting, a bodyweight chin-up and pull-up are often major milestones for many athletes. Consider them upper body strength gold standards. Whether you’re competing in strength sports, normal sports, or lifting recreationally, the chin-up and pull-up should fall somewhere in your program.

The Differences Between Chin-ups and Pull-ups

While chin-ups are just a variation of pull-ups, most know them as completely separate movements. The chin-up and pull-up are very similar, but there is a fundamental difference between the two, and that’s hand placement.

If you’re someone who’s brand new to lifting, or performing these exercises — don’t fret. For this article, we’ll pretend the chin-up and pull-up are both completely separate movements.

An easy way I teach newer trainees to remember the difference between the chin-up and pull-up is this. Think about your hand position when scratching your chin, your palm is facing you — that’s the hand placement for standard chin-ups. Now turn your palm out and try to scratch your chin, you can’t (well, at least) — that’s a pull-up.

When in doubt, think about scratching your chin, palms in mean chin-up; palms out, pull-up.

The muscles activated are similar in each of the movements; the small differences lie in the rate they are activated and the mechanics needed to perform the exercise. A study that was performed in 2014 compared the electromyography (EMG) ratings between a conventional pull-up and chin-up.

Chin Up & Pull Up EMG Ratings

The authors pointed out that the pectoralis major and biceps brachii EMG ratings were significantly higher during the chin-up. In regards to the pull-up, the authors noted that the lower trapezius had higher EMG ratings. 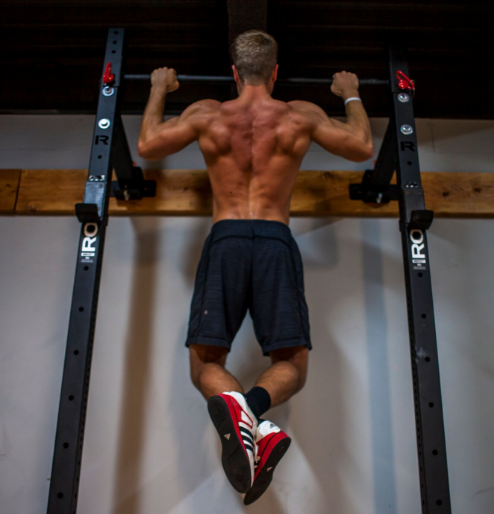 If performing full range of motion chin-up and pull-ups are too tough for you, then there are a few ways you can work towards building up the strength to do so. A lot of coaches will have athletes perform banded chin-ups and pull-ups — while there’s a time and place for it — there’s one issue that can come with this training ideology.

The band is taking away the hardest part of the movement (the concentric/upward motion) and then aiding in the eccentric. At no point does the athlete or client learn how to hold their own weight. Instead try these chin-up and pull-up variations.

Climb and get yourself into the top of the pull-up and chin-up, then work on lowering yourself at a slower tempo. This will support your ability to handle your own weight, while also building muscle and strength.

Beginners: From peak position to full extension work to lower yourself at a tempo of 4-seconds, then add time accordingly to your abilities as you gain comfort and strength.

Beginners: Start with a tempo of 4:4:4 and then work up with your tempo, sets, and reps.

When To Program Pull-Ups and Chin-Ups

For any athlete who’s looking to build power, strength, and a bigger upper body, both the chin-up and pull-up are great additions to any program. Ideally you’ll want to add them to your pulling, or back days.

In addition, you may want to put them higher in the hierarchy of your exercises for any given workout. Since these movement are slightly more demanding on the upper body, then putting them higher up in your accessories is often a good idea. Plus, performing these exercises fresh can help you get the most bang for your buck.

Parallel Chin-Up (palms facing each other)

This is a great movement for beginners, this variation feels a lot more natural during the upward motion for a lot of newer trainees.

Wrap towels around a bar, grab them at their ends and perform pull-ups. This is an excellent variation for building grip strength.

Possibly the hardest variation, but not impossible to learn.

This is an awesome upper body plyometric exercise, pull yourself up like a regular pull-up, but as you reach the peak of the pull you’re going to explosively finish the movement. Once you hit the explosive portion of the pull, let go of the bar and grab again lowering yourself in a controlled manner for the eccentric portion.

Much like the deadlift grip, you’ll have one palm in and one out. Perform a normal pull-up with this grip, make sure you hit the same amount of reps on each side.

Bring your hands close to the point where they’re almost touching (bigger chested people, get as close as possible), this is a great variation when you’re trying to target the biceps.

Start with a normal chin-up grip, you’re then going to pull yourself up to 90 degrees and stop, proceed to lower yourself down to full extension, and then finish the movement. In practical terms, think as if your pull-up has a stutter.

These exercises are great additions to any program, with countless variations and reasons to start using them – I think it’s crazy people leave them out of their daily routines. Whether your goal is to gain strength, power, or size, grip the bar and start pulling.