10 Undeniable Benefits of the Clean & Jerk

Sometimes, people are confused as to how Olympic weightlifting is just two exercises: the snatch and the clean & jerk. (And formerly the clean & press, which was part of the sport in the Olympics until 1972.)

What these people may fail to understand is that these exercises use practically every muscle in the human body, and they don’t just measure a person’s strength — they require extreme amounts of speed, power, explosiveness, flexibility, mobility, agility, and proprioception.

The snatch and the clean & jerk share a lot of the same benefits, but there are a few key differences between the two. 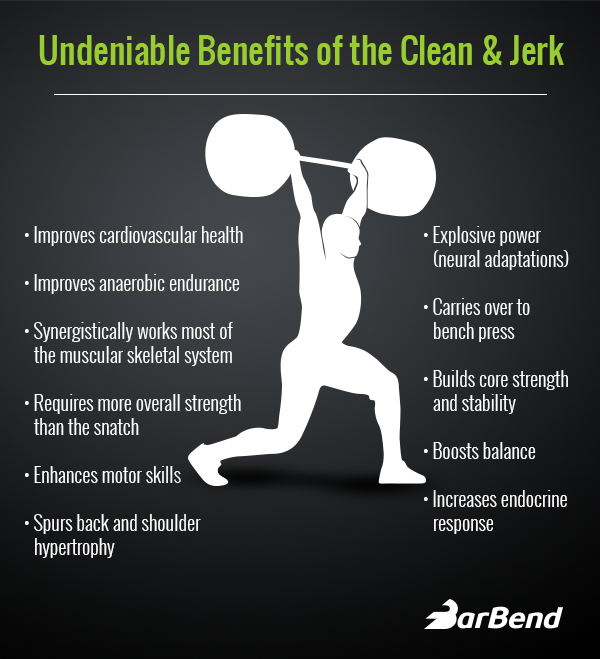 An athlete’s clean & jerk is often somewhere in the area of 120 percent of his or her snatch, and that’s because it requires more raw strength.

Does that mean it’s “better” than the snatch? No. The snatch requires more flexibility and coordination (among other things), but if your goal is pure strength? Get to work on your clean & jerk.

There’s still this myth that cardio is the only way to do cardio (you know what we mean), but many of the heart benefits of sprints and biking can be found by doing more clean & jerks.

Dr. Mike Stone conducted one of the early studies on Olympic weightlifting and cardiovascular responses, and he was surprised to find that resting heart rate, blood pressure, and VO2 Max all significantly improved after eight weeks of training. It’s because the bar travels so far; practically every part of the musculoskeletal system is worked, which is why just a few reps can leave you gasping for breath — and improving your heart.

Because Olympic weightlifting focuses on explosive bouts of power for a short duration, it primarily uses the ATP-CP energy system. Training in such a manner builds both anaerobic power and endurance, which can translate to better performance in sprinting and other high intensity, low duration activities.

(Learn more about the awesomeness of Olympic weightlifting with 13 Undeniable Benefits of the Snatch!)

Extensive research, including a widely-cited 2012 study of over five thousand Americans conducted by the University of North Florida, has found that regularly lifting weights and increasing overall strength levels may reducing the likelihood of developing metabolic syndrome. Metabolic syndrome is of particular interest to public health, as it refers to a cluster of conditions that includes high blood pressure, high blood sugar, high cholesterol, and excess abdominal fat.

And one of the great things about weightlifting torching belly fat is that it also reveals the bulletproof six pack that it helps create. Hoisting heavy weight to the front rack and staying upright while you throw it overhead builds unbelievable core strength and stability, not only carving an enviable set of abs but also building the entire core from front to back. That means better posture, a more injury-resistant back, and more efficient mechanics throughout the entire body.

Motor skills refer to movements that are carried out when the brain, nervous system, and muscles all work together synergistically — when your motor skills are better, your entire body moves more efficiently.

Because of the complex and full-body nature of the clean & jerk, it teaches various muscle groups to move together and it helps the body move as a unit, helping to tune up the nervous system and improve coordination, which carries over to a variety of other activities.

You rarely see a greater demonstration of balance than when an Olympic weightlifter is under a barbell.

It’s important to note that balance doesn’t just mean you’re less likely to fall over, it’s actually an important marker of longevity. For instance, a well-known study in the British Medical Journal tested the ability of almost three thousand men and women in their 50s to balance on one leg with their eyes closed. Thirteen years later, they found that those with the lowest score on the test were five times more likely to die within the 13-year study period than those with the highest score.

Olympic weightlifters have some of the highest vertical jumps of any athlete. After all, the clean and jerk requires “jumping” under the greatest amount of weight, not just to bring the barbell to the front rack, but again to hoist it overhead — you can’t do either of these movements slowly, and the clean in particular forces you to recruit as many motor units as possible as fast as possible.

The clean & jerk isn’t just a compound movement, it’s the compound exercise, putting the body underneath more weight and stressing more muscles than perhaps any other exercise. In response to the strain, the body lets loose a cascade of beneficial hormones that help the body to build muscle, lose fat, and adapt from the stress, like growth hormone and testosterone, which result in stronger, leaner, biologically younger bodies.

And all those hormones mean…

Look, at BarBend we’re more about strength and health than looking hot, but damn, that body. A body that can clean & jerk serious weight is a perfect storm of form and function, where hormones and hypertrophy join forces to build a seriously aesthetic V-taper and the kinds of glutes and quads that can support it. And because it’s a multi-joint movement, the clean & jerk naturally achieves a more balanced musculature.

We know not everyone who lifts weights looks like Dmitry Klokov, but if you do what it takes and eat what you need to build a big clean & jerk, you’ll cut a figure that screams strength and capability.