What Do Lifters Mean When They Say Create “Long Arms” In the Deadlift?

This deadlift cue can be make or break when pulling heavy!

An awesome, and sometimes misunderstood cue in the deadlift, is to create long arms. In theory, it seems like a simple cue, right? It’s just means make sure the arms are straight and make them “long” compared to what their length is compared to when there’s any form of flexion at the elbow. Well, yes and no.

The act of creating “long arms” is pretty easy to understand and it’s common knowledge to avoid pulling weight with bent arms, but how you actually sequence and express this cue when deadlifting is where the confusion can come in.

If you love reading about deadlift cues, then I highly suggest checking out some of the following content below:

Note, this is not an article intended to overcomplicate a simple deadlift cue, but to simply highlight what the cue “long arms” means and how to execute it correctly.

What Does the Deadlift Cue “Long Arms” Mean?

From setup to lockout, there will be a distance the bar needs to travel for a rep to be deemed as successful. If the arms are bent and have a shortened length, then this range of motion will be increased, which can limit top end pulling potential.

The tricky part about using this cue when starting out especially without a coach providing feedback is sequencing the body and joints in an efficient way to create the desired effect. If you’re having trouble with this cue, then there are a few small details that should be taken into account to make your pull even more efficient.

First, think about depressing the scaps, and avoid overly contracting the lats upwards to a point where they’re hiking upwards and resembling what some call “squeezing the pencil” between the shoulder blades. To envision and practice this, before you set as you normally would for the deadlift, pull the lats together, notice how the arms actually move upwards? Check out the image on the right where I over-exaggerate the upward-esque lat contraction. 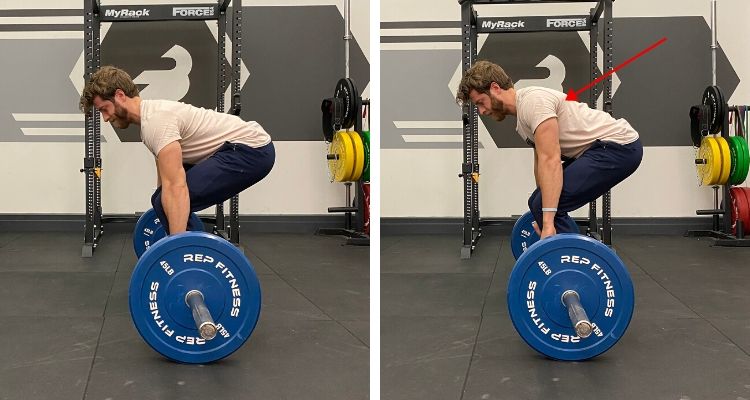 Instead, depress the scapula and contract the lats by thinking as though you’re trying to bring them down the sides of the torso. There’s a very subtle difference in the cueing here and it can be the difference of adding another centimeter or inch to your pull. This example is similar to performing a dumbbell row with the elbow tracking directly upwards versus back and down, the latter is much better for contractility purposes.

Check out the example below where on the left I have a fair amount of protraction, while on the right I’m overly protracted causing my lats to pull out of position so my setup then loses tightness. The shoulders will always be protracted when pulling, however the key is if they’re pulling your torso out of position, if they are, then you may need to evaluate how you’re packing the lats. 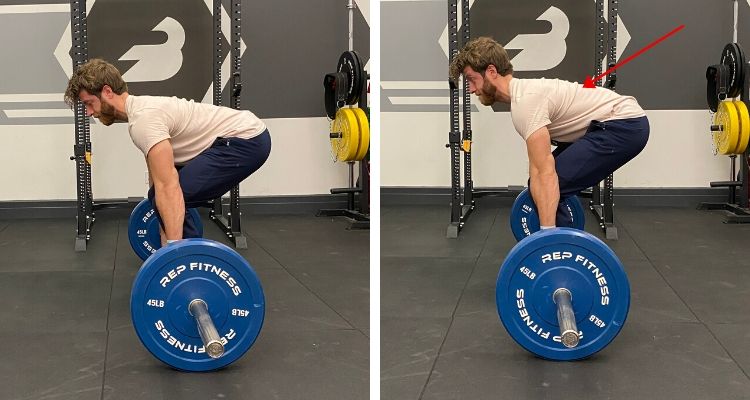 Again, it’s a subtle difference, but one that can make or break tight torso positioning when breaking the floor. This is also when pulling the bar tight with the lats comes into play (circle back to point one!).

The deadlift cue “long arms” can be incredibly powerful and it’s crucial to understand when pulling big weight. At the end of the day, the arms should resemble hooks in the deadlift and if they’re flexed at all, then ranges of motion are not being optimized for one’s potential.

What does "long arms" mean in the deadlift?

The deadlift cue “long arms” entails how a lifter lengthens their arm positioning in an attempt to limit their effective range of motion and leverages for the deadlift. Basically, it’s a cue used to explain how the arms should be positioned when attempting to move the most amount weight possible for one’s deadlift style.

How to use "long arms" in the deadlift?

One of the best ways to think about the cue “long arms” is to pretend the arms are like ropes and the hands are like hooks. The arms should remain long and be void of any flexion to ensure their length is used to their fullest extent when pulling.

Does this cue work for conventional and sumo deadlifts?

Absolutely. The cue “long arms” is like the hip hinge, it’s something that will be applied to both deadlift styles (sumo and conventional) and using it correctly will ensure higher proficiency when pulling.

Zydrunas Savickas Will Compete in the Rescheduled 2021 Shaw Classic

Julie Foucher on CrossFit, Her Future As a Physician, and What Comes Next for “Pursuing Health”