GAT, which stands for “German American Technologies,” has been around for about 20 years and sells a huge variety of niche bodybuilding products like fat burners, testosterone boosters, mass gainers, and the like.

Nitraflex is their best known pre-workout, and it’s strong: it contains 325 milligrams of caffeine, the amount you’d find in just under 3.5 cups of coffee. But there are a lot of other ingredients in the mix. What does it bring to the table?

This is a proprietary blend, so we don’t know how much of each ingredient it contains except for caffeine and beta alanine, of which there are 325mg and 1,600mg respectively.

So what do these ingredients do? Let’s start with those that have the most evidence behind them.

First and foremost is the large amount of caffeine, the amount found in over 3.4 cups of coffee, the most I’ve ever seen in a pre-workout. Then there’s the citrulline, which is linked to improved blood flow; beta alanine, which is widely accepted to improve endurance; tyrosine, which may help with focus and energy; and the theanine, which helps to improve focus and reduce jitteriness when you’ve had a lot of caffeine. (Check out our article on theanine here.)

These are great ingredients and on their own, they’re probably enough to boost energy, endurance, and focus. The citrulline has even been linked to hypertrophy, though this might just be because it could help you grind out more reps.

A few of the other ingredients have some interesting science behind them. The raulwolfia canescenes extract is very similar to yohimbine, a stimulant that has been linked to improved energy and focus. (Though it can cause an upset stomach in some folks, so it might be smart to start with a smaller dose of this product.)

The other ingredients are something of a mixed bag. The resveratrol and the pterostilbene (a derivative of resveratrol which has more or less the same effects, but is more potent and absorbs better) are antioxidants, so they may reduce oxidation caused by exercise. That’s a good thing, but they may also inhibit some of the positive adaptations to exercise, like oxygen capacity.

The DMAE bitartrate is usually considered a supplement for reducing beta amyloid plaque, a buildup of which may contribute to degenerative mental disorders like Alzheimer’s disease. Taken regularly, it may well improve memory and focus, though it’s not super clear if it will improve focus in the short term.

The arginine is said to improve blood flow and nitric oxide, and it may be of benefit in moderate rep ranges. (Think functional fitness-style workouts.) It’s not a great way to boost nitric oxide and it competes with other nitric oxide supplements like citrulline, which this product already has. Including both of them at once probably makes the arginine unnecessary. The AAKG (a kind of arginine) may help with strength, but studies are very, very mixed in this regard.

Then there’s the “testosterone-enhancing complex.” There’s not a lot of information on GAT’s proprietary compound calcium fructopyranose borate. It appears to be like boron, which might inhibit processes that break down testosterone, and there’s evidence that it can temporarily boost your free testosterone. We need more studies, but the research is relatively promising.

This is an inexpensive supplement with a ton of caffeine and a lot of extra ingredients that are linked to better focus and endurance. There’s even evidence — though not 100 percent conclusive evidence — that it can temporarily increase your free testosterone.

It does contain artificial sweeteners and I’m not sold on some of the ingredients, particularly the arginine and the DMAE bitartrate, but my biggest issue is the fact that it’s a proprietary blend. We don’t know how much of each ingredient it contains (besides the caffeine and beta alanine) so we can’t know for sure if it’s hitting an effective dose.

But GAT’s Nitraflex is relatively cheap, relatively tasty, and it contains enough science-backed ingredients that I’d be comfortable recommending it. 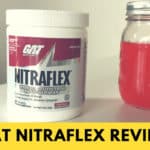