Ghost calls themselves a lifestyle sports nutrition brand, and in addition to their supplements their site provides things like workout playlists, fitness content, and interviews with DJs and entrepreneurs. Today I’m reviewing Ghost Amino, a BCAA supplement.

On the supplement side, they focus a little more on pre-workouts than anything else but we’re trying Amino, which is meant to provide “BCAAs + hydration” during or after a workout and “sustain greatness at any hour.” So does it work?

One scoop contains 10 calories and 2 grams of carbs, with no sugar.

Each serving has 5 grams of BCAAs with a 2:1:1 ratio of leucine, isoleucine, and valine.

Then there’s a little over three grams of seven different amino acids, including one gram of citrulline.

There’s a decent amount of calcium, sodium, and potassium for hydration, but the “Smart Hydration” blend has a lot more to it. There’s one gram of taurine, half a gram of organic coconut, 5-HTP, and Alpha-GPC. I’ll discuss the significance and effects of all these ingredients in the next section.

The BCAAs themselves are linked to improved muscle retention, endurance, and focus during workouts, though I will say that I see more experts recommending 7 to 10 grams per serving than the 5 grams in Ghost Amino.

So what about everything else? The seven Ghost Amino Acids aren’t given much justification. Citrulline is a pretty common addition to BCAAs because it may improve circulation and endurance, but there’s also lysine, phenylalanine, histidine, methionine, theanine, and tryptophan. The tryptophan might improve mood, the threonine might help us synthesize proteins, but none of these — besides the citrulline — is especially well-known for its sports nutrition applications.

But what about the Smart Hydration blend? There’s a gram of taurine, which might help reduce muscle cramps and aid with hypertrophy (it pulls water into your muscle cells), the calcium might help prevent bone deterioration from exercise, and the coconut has a few electrolytes, but the Alpha-GPC and the 5-HTP are the main attractions here.

Alpha-GPC is a compound that’s meant to promote focus and power output in athletes, and it’s also linked to increased production of growth hormone, which helps us build muscle and reduce body fat. 5-HTP is an amino acid that appears to help us produce serotonin, which is linked to improved cognition, mood, and appetite control.

The issue is that typically, both 5HTP and Alpha-GPC are used in doses of 300 milligrams, and in Ghost Amino there’s just 150mg of Alpha-GPC and 50mg of 5-HTP. That’s not to say that their presence will have no benefit or effect to the consumer, but it’s worth remembering that the effects may be pretty mild when compared to a dedicated supplement.

That’s somewhat expensive; popular competitors like Scivation and MusclePharm are closer to 11 cents per gram of BCAAs, but they don’t contain the kinds of extra ingredients you’ll find in Ghost. So while, like their whey protein, Ghost Amino is expensive compared to popular brands, the quality of the ingredients may justify the price.

I tried the Blue Raspberry flavor, which tastes like raspberry candy, but it also has a hint of vanilla. It’s kind of like a raspberry candy that’s been sitting in cream soda. It’s unusual, but I really liked it.

Free from soy and acesulfame potassium, the people at Ghost have put together a very interesting addition to the BCAA industry.

I liked the BCAAs themselves and the Smart Hydration blend, but I will emphasize that I wasn’t sure of the purpose of many of the amino acids and I wasn’t convinced that the cognitive-enhancers are present in high enough amounts to have a significant effect. It’s up to you, the consumer, to decide if the price makes it worth picking up a tub and seeing if you respond well to the 5-HTP and Alpha-GPC. 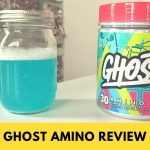