Ghost is a pretty interesting supplement company that prefers to call itself a “sports nutrition lifestyle brand,” and as such they sponsor both bodybuilders and DJs and their website includes music playlists, fitness articles, and short documentaries.

Their flagship product is probably their pre-workout known as Legend, but their creatine-based, zero-calorie muscle builder called Size has a lot going for it. It comes in unflavored and Sour Watermelon Warhead®, which they made in collaboration with the candy company. Naturally, that’s the one we decided to try out — read on for our thoughts.

The rest of the ingredients in the Sour Watermelon flavor are mostly natural and artificial flavors and sweeteners — including sucralose and acesulfame potassium — some red food dye, xanthan gum, and anti-caking agents.

The creatine, of course, has strong links to power output, muscle endurance, muscle size, and potentially some neurological benefits. Ghost’s CEO Daniel Lourenco told us that he used the two different forms to “balance absorption, solubility, and max efficacy.” There’s not much evidence that hydrochloride absorbs any better than monohydrate, but it does dissolve a lot more easily in water and it can reduce stomach cramps that some people experience when they take regular creatine monohydrate.

Then there’s the betaine, which has some pretty interesting research supporting its use as a means to increase power output. A 2013 study published in the Journal of the International Society of Sports Nutrition found that 2.5 grams of it increased work capacity in the bench and two other studies found it led to significant increases in power on the back squat.

The beta alanine has strong link to endurance as well, and it’s well-dosed here at 2 grams (most supplements provide 1.6 grams, which is considered an effective dose). Note that beta alanine can cause a tingling sensation on the skin.

The star of the mix is epicatechin, an antioxidant that’s particularly high in chocolate that Ghost calls a “cutting edge myostatin inhibitor/muscle builder.” There aren’t a lot of human studies, but there is pretty solid evidence that it may help oxygenation to the brain, help nitric oxide production (which could improve endurance), and promote muscle growth. The muscle growth could happen because epicatechin appears to inhibit myostatin, which suppresses muscle growth. This human study found such an effect with two daily doses of 75 milligrams and there are 200 milligrams of it in Ghost Size, so the dose seems to be on point.

AstraGin® is a mixture of the astragalus membranaceus herb and the ginseng root, and it’s here to help all these ingredients absorb. There are some pretty interesting rodent studies and in vitro studies that have shown it may have this effect, perhaps by decreasing inflammation in the digestive tract.

You can pick up 30 servings for $40, so that comes to $1.33 per scoop or 22 cents per gram of creatine. That’s pretty pricy compared to plain old creatine monohydrate, which is usually around 3 to 5 cents per gram, but Size obviously has a lot more in it than creatine monohydrate. As a combination creatine — including hydrochloride — and beta alanine and betaine and epicatechin and Astragin supplement, you might find the price reasonable.

Sour Watermelon tasted great. That is, if you like sour watermelon-flavored candy, which is exactly what it tastes like. In addition to natural and artificial flavors and the artificial sweeteners sucralose and acesulfame potassium, Size has malic acid, citric acid, and tartaric acid to give it a pleasantly sour taste.

Besides the relatively high price, the main issues I can see someone having with Size is that it’s not really an “any time” creatine. With all the extra ingredients for boosting power and in particular the beta alanine, which can give a tingling, energetic feeling, it’s probably not something you’d want to take during the work day or before bed. It’s not an “any time” creatine, it’s more of a pre-workout creatine.

But as a pre-workout creatine, I think this is a success. The doses are solid, the research is good, and it tastes great. 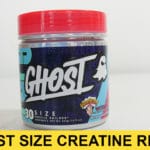 China’s Lu Delin Is a Certified Unit. His 180-Kilogram Hang Snatch Proves It