Get Strong and Bust Through Sticking Points With the Half Squat

Yes, half squats do actually deserve a spot in your training routine. Here's why.

Half squats are thought to be a gym sin carried out by either weak or lazy squatters that can’t or don’t want to hit depth. Full-depth squats are indeed ideal for building leg muscle, improving squat mobility, and carryover to strength sports like powerlifting. The thing is: Half squats do have a place in your training.

Editor’s note: The content on BarBend is meant to be informative in nature, but it should not be taken as medical advice. The opinions and articles on this site are not intended for use as diagnosis, prevention, and/or treatment of health problems. It’s always a good idea to talk to your doctor before beginning a new fitness, nutritional, and/or supplement routine. None of these supplements are meant to treat or cure any disease. If you feel you may be deficient in a particular nutrient or nutrients, please seek out a medical professional.

How to Do the Half Squat

The half squat is a squat variation (often done with a barbell) that has a lifter restrict the depth at which they descend into a squat to halfway between parallel and fully standing. Below is a step-by-step guide on how to perform the half squat using a barbell. 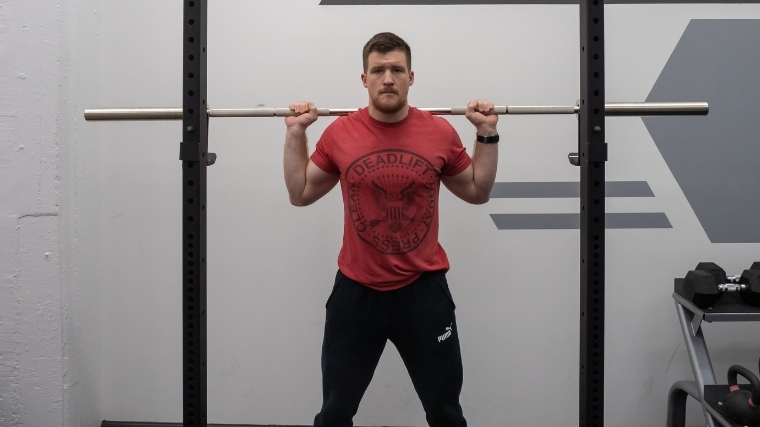 Start by stepping under a barbell (supported in a rack), setting a firm foundation by flexing your core, and preparing to lift the barbell out of the rack. Once you find a comfortable hand width, grip the bar tightly by wrapping your thumb around it. Bring your elbows down, and in so they’re close to your lats. This down-and-in elbow position will help you pull the barbell onto your trap and create a stable “shelf” for the bar to sit on.

Form Tip: The tip here is simple — do not rush this process. Press your traps firmly into the bar and brace that core!

Step 2 — Pull Yourself Down into the Squat 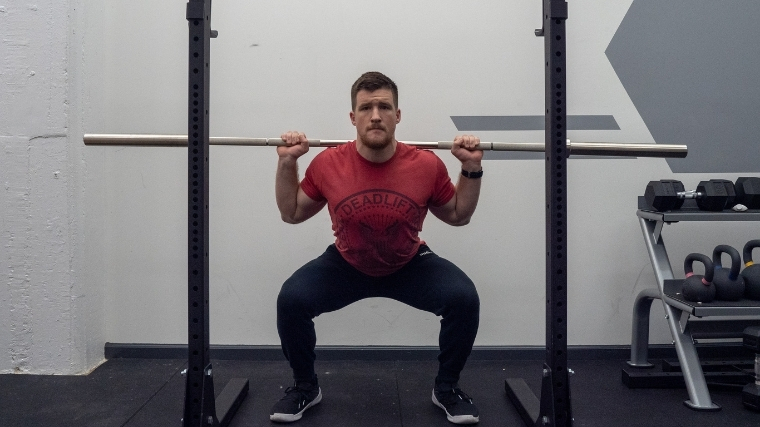 With the feet planted and pressure evenly distributed throughout the feet, slightly push the hips back while simultaneously allowing the knees to bend forward. Squat to a roughly halfway depth between standing and full depth, making sure to keep tension on the legs.

Form Tip: Take your time as you lower yourself into the squat, making sure to feel any weight shifting back/forward or tendencies to collapse the torso.

Once you’ve reached the desired depth, push your back upwards into the bar while simultaneously driving the feet into the floor.

Form Tip: You should feel your legs working, as well as the upper back and hips.

Benefits of the Half Squat

Contrary to popular belief, half squats do have a host of benefits. Here are three reasons to include the half squat into your program.

You Can Target Sticking Points

Strength is angular specific, meaning that you will be strong 10-15 degrees around that position if you are to train at a given depth. So if you’re weak during the top-half of your squat, half-squatting allows you to get strong in the top-half range of motion. Of course, you shouldn’t just do the half squat. Otherwise, you risk weakening your full squat and squat mobility. Also, your legs won’t get as big.

Because you’re not squatting to full depth, you can typically load up the bar with more weight than your standard back squat. Therefore, you’ll be able to get used to shouldering heavier loads, and your central nervous system will adapt to them.

The power position refers to where an athlete assumes knee and hip flexion similar to the half squat angles. They assume a very explosive and athletic positioning that can often allow for increased athletic performance in jumping and running. While the half squat does lack the full range of motion benefit of the standard squat, this squat can be used to strengthen the athletic power position.

Muscles Worked by the Half Squat

The half squat works similar muscle groups to the full depth squat but a lesser degree overall. Many muscle groups are stressed in a greater capacity simply due to the increased amount of loading in this movement.

The quadriceps are responsible for knee extension and engage heavily during the half squat.

The glute muscles are more involved deeper into a squat’s range of motion, but this movement still taxes the area.

Located in your lower back, the spinal erectors support an upright torso position. These muscles are essential during the half squat as you’ll be loaded up with more weight than you’re used to.

Who Should Do the Half Squat?

Below are some reasons why strength, power, and fitness athletes can benefit from performing half squats.

Strength and power athletes may benefit by using half-squat if they’re weak halfway through the squat. The half squat also helps overload the body and CNS, which may be beneficial when prepping the nervous system for max lifts. Also, the half squat is essentially the first half of a push press, so strongmen and weightlifters who dip before log presses or jerks will benefit greatly.

The half squat is a pretty specialized movement, so new lifters should stick with full squats. That said, the same benefits listed above apply to the general population. Just be sure you’re conscious of how much weight you’re lifting. Sure, you can lift more with the half squat, but not a hundred pounds more.

The half squat is a good option to increase strength and muscular endurance. If you’re chasing bigger wheels, many other full-range-of-motion movements are more beneficial.

If you’re looking to get stronger, then perform half squats a few moves into your workout. Do three to five sets of three to five repetitions with heavy loading, resting as needed.

Perform two to three sets of 20-30 repetitions with 45-60 second rest with light to moderate loads. You’ll seriously exhaust your quads and spinal erectors with this option, but be sure to work full squats into the mix still.

Here are three ways to turn your half squat efforts up a few notches:

This half squat variation is done by squatting to a box set at the half squat range of motion. This differs from the half pause squat as the lifter does not need to control themselves while paused in the half-squat position isometrically. This could be helpful if a lifter has issues understanding where the halfway point is or if someone tends to lose proper balance and foot pressure in this specific range of motion.

The half pause squat is done by pausing in the half squat position. This variation s often used when lifters perform half squat for technique or strength considerations, as it forces great awareness from the lifter.

Half Squat with Kettlebells or Dumbbells

The half squat can be done with kettlebells or a pair of dumbbells and offers many of the same benefits as the half squat.

Below are two half squat alternatives that can be done to increase strength and hypertrophy or add variety to a training program.

Full Squat with a Pause

This is a full-depth squat alternative that entails the lifter to pause either on the way down (eccentric pause) or way up (concentric pause) at the halfway point in the squat. This can help address the same angular strength needs as the standard half squat and still train the squat in the full range of motion.

The Anderson squat focuses on the concentric aspect (or lifting phase) of the squat. You can hit various depths to increase leg drive and address any strength limitations or tension breakdowns while standing up out of the squat.

Is the half squat better than the full squat for muscle growth?

No. Loading is just one aspect of muscle growth. You also should move your muscles through a full range of motion to fully stimulate all of your muscle fibers. Stick with full-range squats if you want bigger legs.

Are half squats bad for my knees?

This depends on the individual. However, the increased loading that accompanies half squats may agitate the knee joint. Always consult with your doctor before starting a new workout program.

Can I lift more weight with half squats vs full squats?

Generally speaking, yes. The shorter range of motion allows you to lift more than the full squat. As a joint goes into deeper flexion angles, it takes more muscular strength to overcome that angle to bring it back to full extension.