Push Press vs Overhead Press – Which Should You Choose? 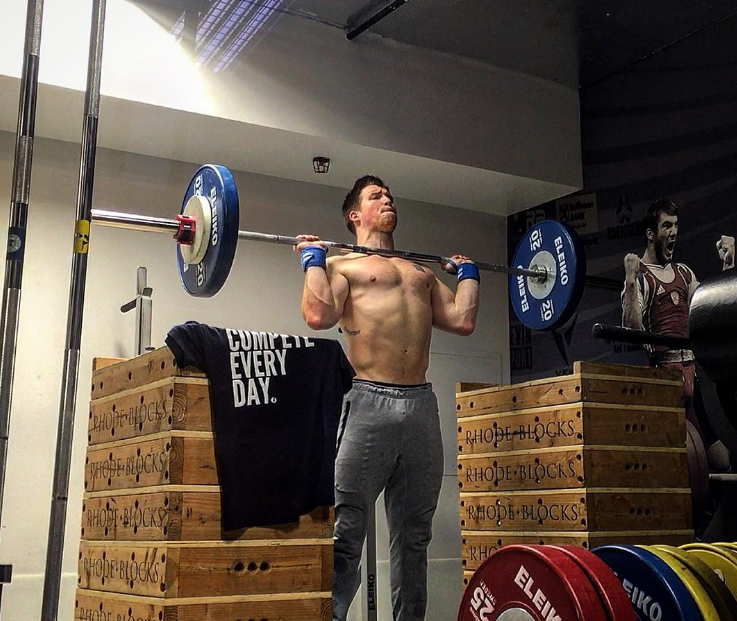 While the push press is an exceptional movement, other movements should be developed and utilized to maximize all-around overhead strength, power, and performance. The strict press is a common exercise seen across many athletic domains. Therefore, in this article I wanted to lay out the pros and cons of each movement to help coaches and athletes best individualize their training and exerciser selections.

Below is a video demonstration on how how perform the barbell push press. All types of modalities can be used (dumbbells, kettlebells, logs, etc).

Below is a video demonstration on how how perform the barbell strict press. All types of modalities can be used (dumbbells, kettlebells, logs, etc).

Below are five athletic attributes that can be impacted by both the push press and the strict press.

The push press is the best option for power production, as it entails a lifter to use the legs, hips, and upper body to maximally accelerate heavy loads overhead. This movement has been shown to have similar benefits for sport and jumping athletes as the squat jump, as the powerful movement can increase leg and hip explosiveness. Power development is not only important for sport athletes, weightlifters, and strongman, it is a critical component to powerlifters and fitness athletes looking to increase overall performance for strength, muscular mass, and force output.

Loading, training volume, and metabolic demands placed upon a muscle all affect hypertrophy. Since both movements do a great job at all of them, I find it best to include both movements in a hypertrophy based training program. The push press can be used to increase power and overall loading volume; while the strict press can be used to drive maximal strength and increase time under tension, both of which can work to enhance muscle and performance (as I assume you want both since you are here on BarBend!).

While the push press can increase your ability to supramaximal load the shoulder and upper body, the strict press employs zero lower body assistance and requires a lifter to initiate the movement from zero acceleration, demanding great amounts of concentric strength. Seeing that maximal strength is often expressed at low velocities, an athlete must have the ability to promote high amounts of force to accelerate a rested object, making the strict press a vital part of that equation.

While strict pressing is at the foundation of the push press, the push press, once learned, is a complete and compound movement that every athlete must work to develop. The integration of hip explosiveness, power, strength, and the ability to transfer force quickly is needed for most sports that depend on such athletic capacities. Strongman, weightlifting, functional fitness, football, life, etc all require such abilities. This is not to say the strict press cannot offer some of these, this is simply stating that the push press allows for greater loads to be moved (strength), increased hip drive (power) and a more muscles being used at once.

It is important to note that I am a coach who works with weightlifters, collegiate athletes, and CrossFitters, all of who have some dependency on concentric strength (low speeds), however have a great dependency on explosive strength, hip power and drive, and total body movement patterns. Understanding the needs of the sport/goal should dictate which movement you prioritize. For example, if a lifter increases their strict press as a weightlifter, this may or may not increase their ability to use the hips, core, and upper body in unison to transition better to jerks. If however, they increase their push press, I feel very confident they not only have developed greater power output and hip drive, they also have developed their ability to use the stretch shortening cycle and even have increased overhead lockout strength with similar loads to ones they will use in the jerk. Specificity makes the push press the ideal movement of maximal athletic potential ONCE an athlete has learned the strict press (I still have athletes train strict pressing during hypertrophy blocks or warm up set).

The strict press is a most foundational overhead movement for nearly every single athlete. The ability to press loads overhead leads to further progressions into push pressing, jerks, and other overhead movements to move serious loads. Without proper overhead pressing mechanics, athletes may rush their development to place loads safely and stability overhead, which can result in injury to the shoulders, elbows, and a slew of compensation patterning. Personally, as a weightlifting coach, I find many athletes who lack the abilities to press and hold barbells overhead without the usage of the legs. This is a red flag to me, which I then regress them (to their dismay) to a steady dosage of strict pressing until they can handle the overhead volume and stress that more compound movement (push press, jerks, even handstand push ups) demand.

Take a look at some of my best articles on building overhead performance for strength and power athletes.