The thruster, also known as a squat press and/or clean into press, has been around in fitness, Olympic weightlifting (yes, keep reading), and human movement for…years. In this article, we are going to break down the thruster movement (I say movement vs. exercise because the thruster can include many exercise variations; see below) and all that you need to know to integrate it into your current training routine.

In this thruster press exercise guide, we will cover:

How to Perform a Thruster: Step-By-Step Guide

Below is a step-by-step guide on how to properly set up and perform the thruster, more specifically the barbell thruster. Note, that using kettlebells or dumbbells (or any other type of equipment may alter the below steps somewhat, but the directions below can still generally apply to the thruster movement).

Start with the bar in the front rack position, much like you would when taking a front squat from the rack or after receiving a clean.

Coach’s Tip: You can perform thrusters both from a rack or by cleaning it from the ground. 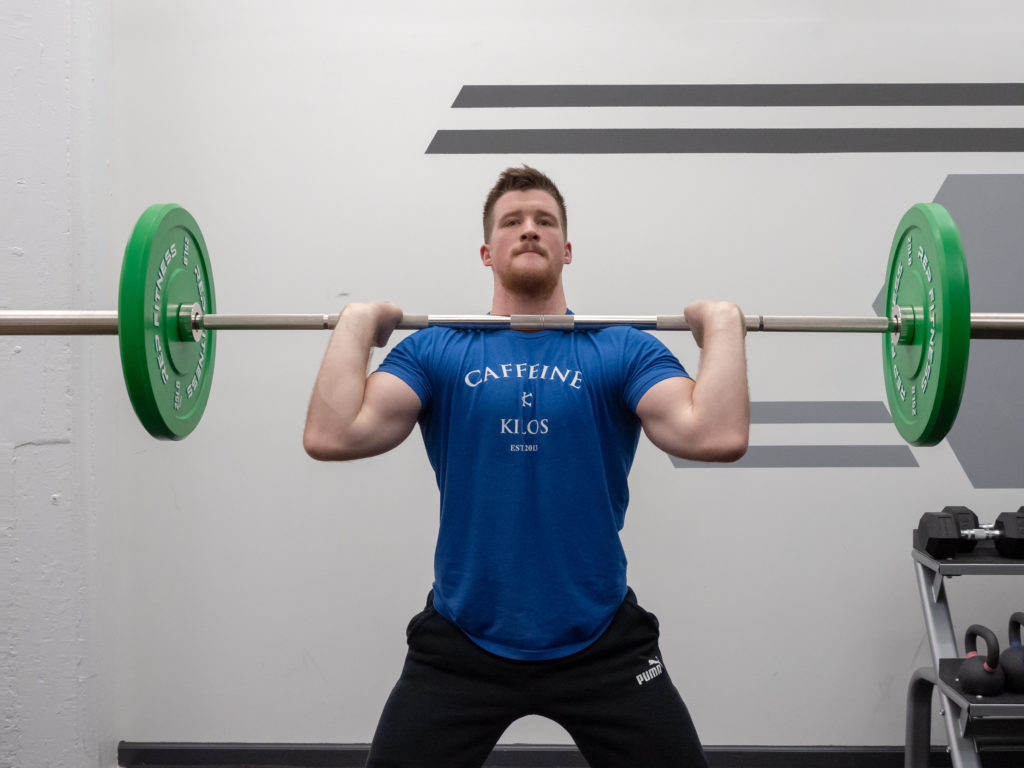 Once you have assumed a proper front rack position, brace the core and keep the chest and elbows up as you squat downwards into the front squat.

Coach’s Tip: It is important that you descend into the squat so that you can fully load the legs to be utilized for the concentric aspect of the lift. Be sure to remain upright and tense while in the bottom of the squat. 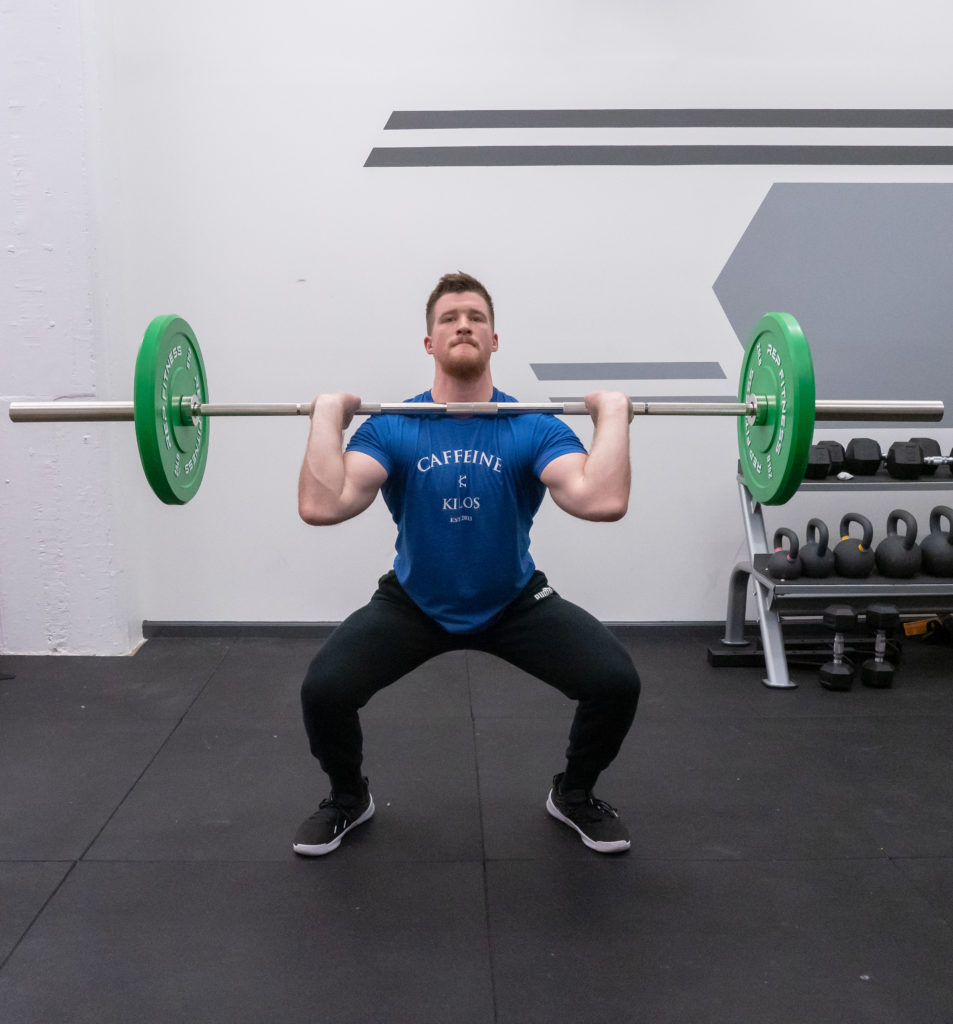 Step 3: Hit Depth and Drive Up (with the legs)

Rebound out of the squat in a vertical position, focusing on keeping an upright torso and increasing the speed and strength of the squat.

Coach’s Tip: For thrusters, the key is to burst up from the front squat at the start, so that you can gain as much vertical momentum as possible, saving the upper body from unnecessary effort (which will come in handling for heavier thrusters and/or higher volumes). 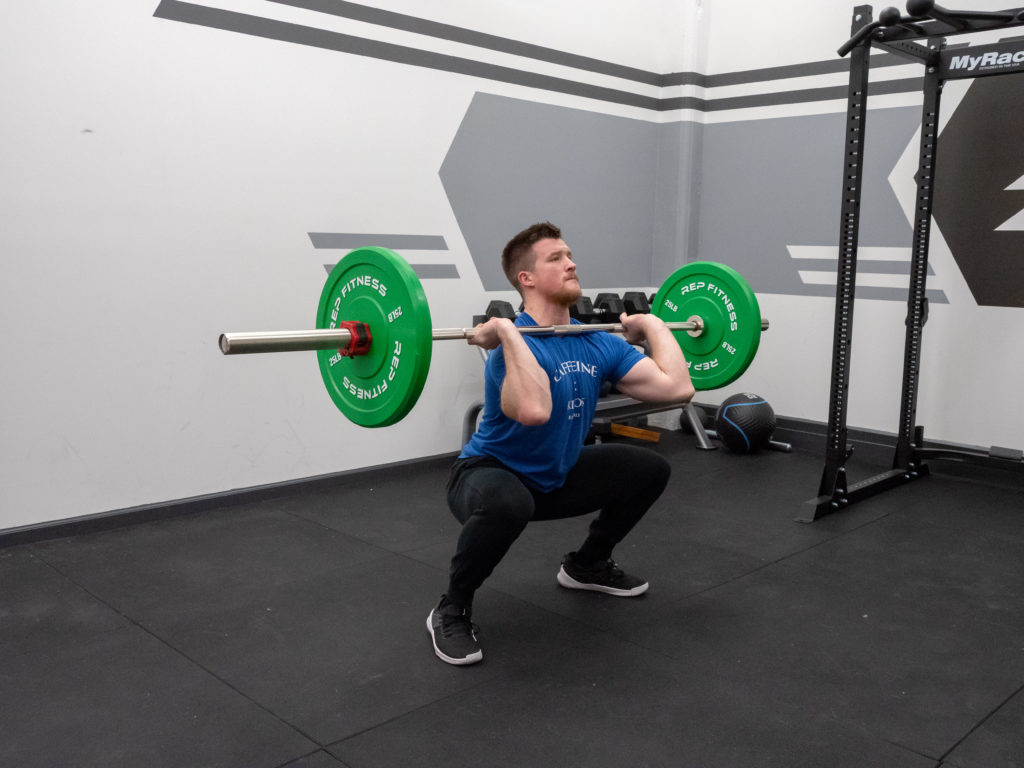 As you reach the top of the front squat, focus on extending the hips while simultaneously beginning to push the load up from the chest and into the overhead position using the shoulders, triceps, and upper traps.

Coach’s Tip: Many lifters will try to press with the upper body too soon, forgetting to fully utilize the legs and power to assist in the movement. 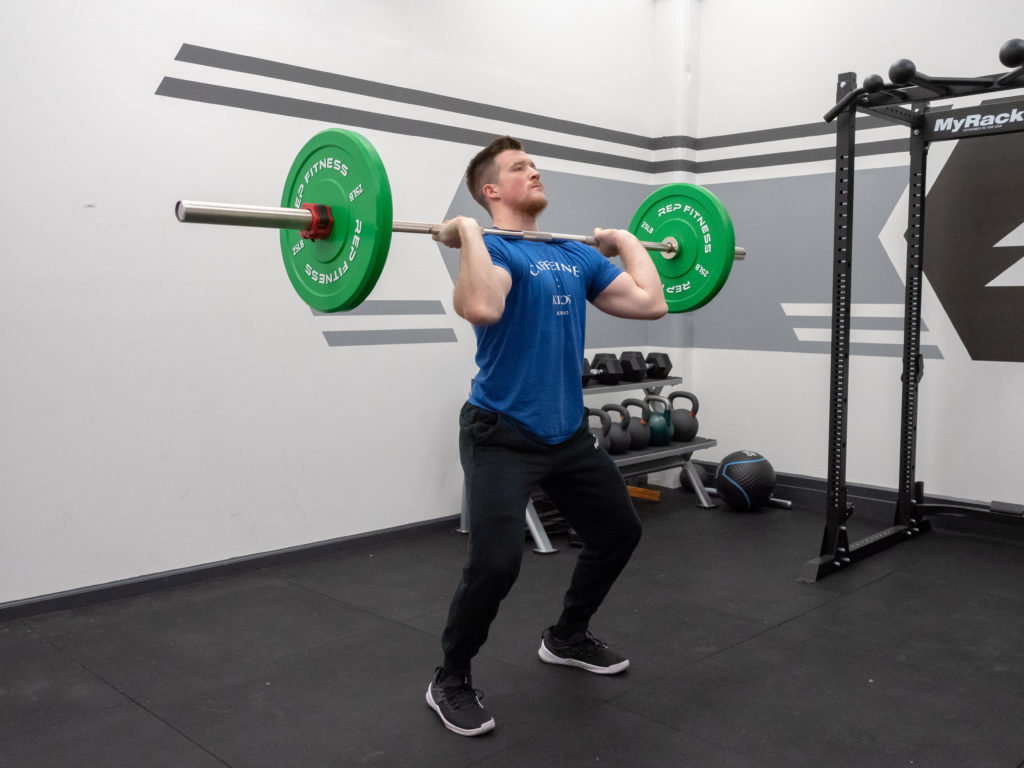 If you are looking to perform thrusters in a cyclical manner, it is important that you pull the barbell downwards to the body so that it returns to the front rack position. To do this, be sure to remain rigid as you pull the bar down (knees and hips extended), bending the hips and knees once the barbell is about 2-3 inches away from hitting the front rack position and descending into the next repetition. 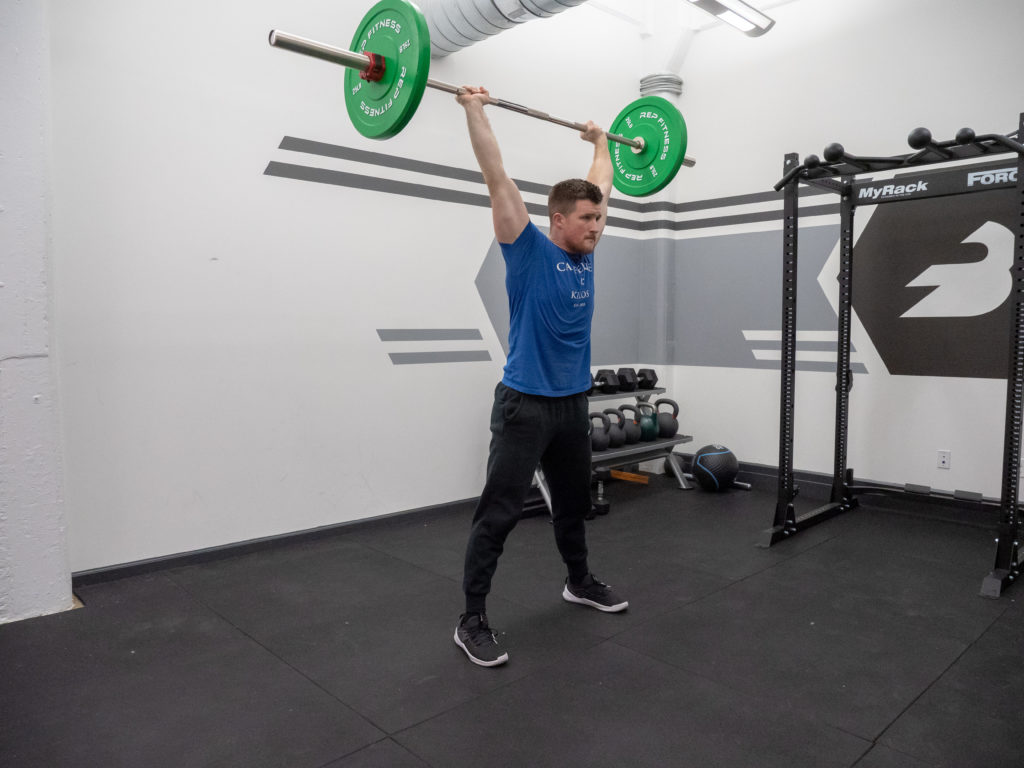 The thruster utilizes some of the largest muscles of the body to promote high amounts of force. Unlike other strength lifts however, the thruster is also dependent on rate of force development (much like the push press and jerk), making it a great total body exercise for strength, power, and fitness athletes looking to build strength, power, and athleticism.

Movements that have a full range of motion, are compound, and stress a great amount of muscle tissue are prime exercises to build into metabolic circuits, AMRAPs, and EMOMs. The thruster has a wide array of variations, alternatives, and applications to strength, power, and fitness sports; allowing a coach to change loading and rep ranges to suit the individual demands (strength, cardiovascular fitness, etc) of the athlete. It is for this reason the thruster is a great functional movement for all athletes, regardless of the goal

The thruster, as discussed below, can increase triceps and shoulder strength significantly when programmed with heavier loads. Utilizing the lower body (front squat) in the thruster movement can be a great training aid to increase overhead pressing and losing volume, much like the push press; both of which allow a lifter to subject their shoulders and triceps muscles to heavier loads than what they presumably would be able to strict press overhead.

Like the front squat, the lifter must remain in a more upright position than in the back squat, due to the loading of the barbell in the front of the body. Due to the positioning of the body, and the fact the lifter must transition the load from the shoulders into the push press and overhead position, any excessive forward lean with the torso will result in inefficient pressing mechanics and horizontal displacement (which will diminish overall vertical pressing abilities).

The thruster is a dynamic movement that challenges the entire body to move in a coordinated effort to promote force with the legs, core, and upper body. Below is a breakdown of the primary muscle groups involved in this exercise.

The thruster is a squat and press movement that demands that the shoulders assist in the overhead pressing of the load to its final lockout position. While a lifter must utilize great amounts of leg strength (as the legs are the key muscles needed to increase the upwards momentum of the barbell), the shoulders are highly involved in the thruster movement.

Strong legs are necessary for thrusters, as the front squat is the base of the movement. Strong quadriceps and glutes are needed to increase thruster strength, muscular hypertrophy, and performance. Without well developed legs, the overall abilities of a lifter will be limited with the thruster.

The triceps assist the shoulders and legs in the thruster, and are primarily responsible for the lockout of the load overhead. The triceps must work to extend the elbows, which can often be a limiting factor in the heaviest of thrusters. To improve lockout strength, a lifter can do exercises that specifically attack extension positions of the elbow, such as floor press or other partial ranges of motion presses.

Like front squats and proper overhead positioning, the thruster challenges a lifter’s ability to stay rigid and upright in the front loaded squat positions. Many lifers may find that their upper back and core strength is limited in the thruster under heavy loads and/or fatigue (during metabolic workouts), suggesting that they develop better squat patterning (more vertical torso) and leg strength to set a lifter in the moment.

Who Should Do Thrusters?

Below are some reasons why strength, power, and fitness athletes can benefit from performing the thruster, either heavy, light, slow, or fast.

Strength and power athletes can benefit from this compound exercise due to it’s application to general strength, sporting movements (clean, press, and squat), and it’s ability to increase rate of force development with heavy loads.

CrossFit and competitive functional fitness athletes know all too well the sport specific need to be efficient and strong at thrusters, wither with the barbell, dumbbell, and kettlebell. In the 2017 CrossFit Open, dumbbell movements were at the forefront, imposing a different stimulus than similar barbell movements. Nonetheless, thrusters (any variation) is a necessary and vital movement to develop work capacity, leg endurance, movement coordination, and sport specific efficiency. Additionally, functional fitness athletes can also benefit from doing heavy thrusters for the same reasons as Olympic weightlifters (benefit the clean and jerk).

While general fitness and movement enthusiasts can benefit from thruster for all the same reason above, one of the most foundational benefits is the the thruster is an all inclusive movement that can be trained across a wide array of variations (barbell, dumbbell, kettlebell, unilateral, etc). The ability of a person to have coordinated total body movements throughout the full range of motion in a cyclical fashion is key to expression of strength, mobility, power, body awareness and control, endurance, stamina, and aerobic capacity.

How to Program the Thruster

Below are three primary training goals and programming recommendations when utilizing the thruster into specific programs. Note, that these are general guidelines, and by no means should be used as the only way to program thrusters.

Muscle hypertrophy can be accomplished by adding training volume (more reps), time under tension, and/or training towards fatigue.

Some lifters may want to train greater muscle endurance (for sport), in which higher repetition ranges and/or shorter rest periods are recommended.

Below are three (3) thruster variations that can be used by coaches and athletes to keep training varied and progressive.

The single arm thruster can be done with a kettlebell or dumbbell, offering many of the same benefits as the thruster movement. This unilateral thruster exercise challenges core stability, squat stability, and unilateral strength.

The cluster, like the clean + push press below, is a combination movement that is very similar to the thruster. The cluster is a full clean (squat) directly into a thruster, without pausing in between to reset (unlike the clean + push press). This continuous and fluid clean, squat, and press is highly challenging on total body strength, coordination, power and barbell clean and press technique.

Below are three (3) thruster alternatives coaches and athletes can use to increase strength and muscle hypertrophy.

The push press is an upper body power and strength movement that is essentially a thruster without the full depth squat. In the push press, the lifter dips into a quarter squat, using some leg strength and power, exploding upwards to finish with the load overhead. Both movements can be used to build power and athleticism, with the push press also being used when trying to limit lower body involvement (due to fatigue, injury, etc).

The clean and push press is a combination movement that can hit may of the same muscle groups as the full thruster. In this exercise, the lifter performs a clean, either a power clean or full clean (squat), with a push press added at the end of the movement to increase upper body shoulder strength and power. This alternative exercise may be a good option for lifters looking to bridge the gap between doing lighter thruster with learning how to gain confidence and strength with heavier thrusters (upwards of 70-75% of a lifter’s clean and jerk).

While the wall ball lacks the ability to build muscle mass, strength, and challenge a lifter’s muscular endurance under heavy loads, the movement patterning is very similar to that of a thruster, making it a good swap for lifters looking to use lighter loads, and help teach the rhythmic nature of such a movement (without having to use a barbell). To reiterate, the wall ball in no way matches the muscular strength, hypertrophy, and power outputs of a heavier thruster, but can be used in the goal is heart rate training and minimize muscular fatigue in the upper body when compared to the thruster.

Take a look at some of out most popular thruster training articles, guides, and workouts!