How to Do the Dumbbell Snatch — Variations, Benefits, Mistakes, and More

You don't need a barbell to be explosive.

Upon hearing the word “snatch,” you probably have an image of some elite weightlifter (like Lasha Talakhadze) toiling away day after day for years on end to master this one exercise. So if you don’t have aspirations of being a snatch monster, then there are easier, more accessible moves you should probably dedicate your time to, right? Well, hold up.

That snatch is a great movement that builds power, strength, and shoulder mobility. If you can’t do the snatch — traditionally done with a barbell — then mozy on over to the dumbbell rack. The dumbbell snatch offers all the same benefits but is far easier to learn. (Not to mention more accessible so that you can do it in your home gym, as well.)

Below, we’ll go over everything you need to know to master this beginner-friendly power-builder, including:

How to Do the Dumbbell Snatch

Below is a step-by-step guide to set up and perform the dumbbell snatch. Note that you can do this movement with two dumbbells, but this guide will illustrate the single-arm variation. 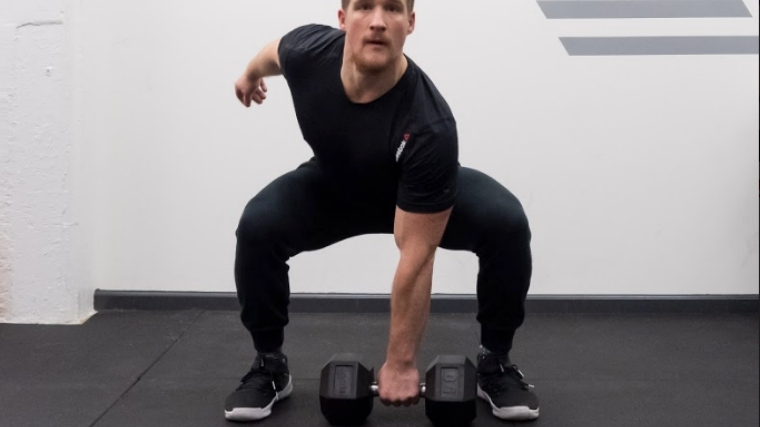 Start with a dumbbell directly below you so that you are standing over it evenly. Squat down so that you are in a similar start position to a deadlift, with the chest and head up and shoulders slightly higher than the hips.

Coach’s Tip: The back should remain flat, with the shins nearly vertical. Once set, grasp the dumbbell and straighten the arm.

Step 2 — Explode Up and Flip 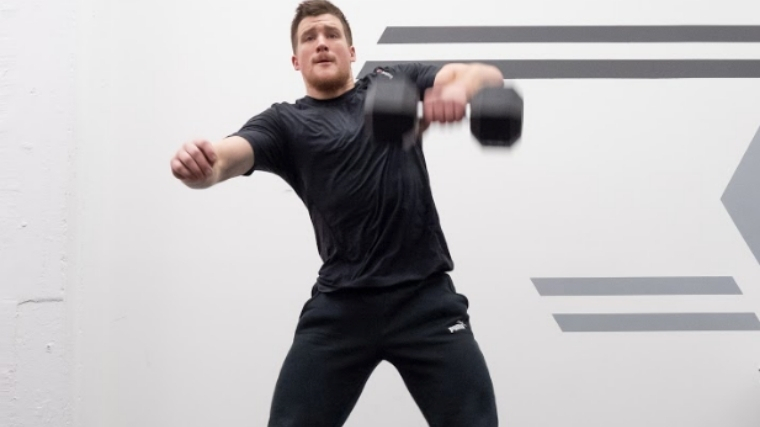 As the weight clears your knees, forcefully extend your body and allow the dumbbell to freely fly upward. Guide it vertically with your elbows and then, at the last second, flip your arm over and drop your torso so that you can extend your arm from underneath.

Coach’s Tip: Be sure to keep the elbow high throughout the pulling process. 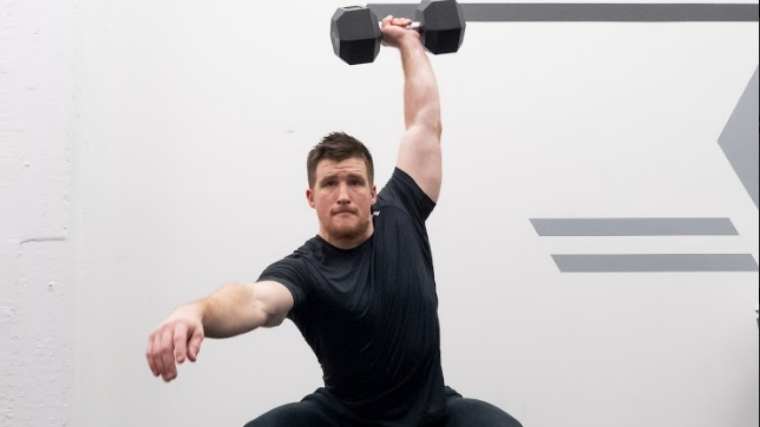 Once the dumbbell has traveled overhead, drop down into a squat position. Some lifters don’t fully squat and instead perform more of a dip while receiving the dumbbell. That’s a legitimate option, but we’re going to show the full-squat version. Make sure you’re stable in the hole of the squat and that your elbow is locked out.

Coach’s Tip: It may be a good idea to warm-up with a few light overhead squats so that you’re comfortable in the position before doing the snatch. 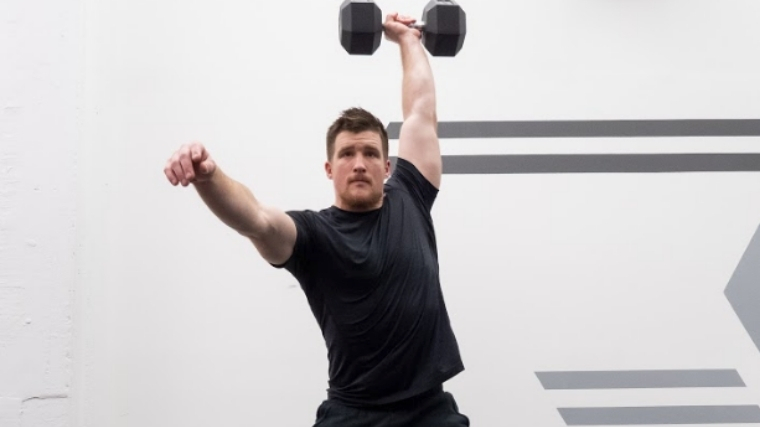 At this point, the hard work is over. Now, stand up, keeping your loaded arm locked out. Drop the dumbbell back down to the floor (with control) to begin the next rep.

Coach’s Tip: Don’t let go of the dumbbell. Let it fall back to the floor as you hang onto it.

The two main use cases of the dumbbell snatch are as a conditioning tool or perhaps even as part of a larger CrossFit or functional fitness training session. No matter your “why”, you have to know how to program it properly. Here are a couple different ways to slice the dumbbell snatch.

With so many moving parts at play, it’s easy for things to go wrong in the dumbbell snatch. Keep an eye out for these common errors.

Pulling With Your Arms

Much like the other Olympic lifts (the barbell snatch and clean & jerk), the dumbbell snatch is not an upper body exercise, at least not primarily. When you’re pulling the weight from the ground, make sure that you’re keeping your arm relaxed and allowing your legs and hips to do the work in the first half.

To properly guide the weight upward, your elbow needs to remain stacked on top of the dumbbell for as long as possible. If you lower your elbow too early in the transition phase, you might lose your power and miss the lift. Try to think of your elbow as a guide that the dumbbell must follow as it passes your torso.

Once the weight is overhead, you must prioritize keeping the dumbbell directly on top of your shoulder joint. If your arm isn’t perfectly vertical, you’ll immediately notice a serious drop in your stability that could cause you to lose control altogether. Make sure that your shoulder, elbow, wrist, and the weight itself are vertically aligned overhead.

Below are three dumbbell snatch variations that coaches and athletes can use to keep their training varied and progressive.

The barbell snatch is a better option if a lifter is looking to acquire more application to the sports of weightlifting. This exercise often allows for more loading (in total). However, it also requires greater technique, power, and mobility.

The kettlebell snatch can be done with one or two bells, similarly to the dumbbell snatch. Also, note that the loading is slightly shifted to the hips and posterior shoulder due to kettlebells’ offset nature.

You can perform similar movements to the dumbbell snatch and reap many of the same benefits the exercise provides. Here are a few examples of appropriate substitutions.

The muscle snatch, most commonly done with the barbell, is a regressed version of the barbell snatch since it doesn’t require as much technical proficiency and mobility in the receiving position. Like the dumbbell snatch, the muscle snatch can help new lifters establish better pulling mechanics while still targeting the upper body.

You can do the snatch high pull with a barbell, kettlebell, or dumbbell — all of which allow for the same pulling mechanics as the snatch without the turnover and overhead support phases. This may be useful for individuals trying to limit overhead training due to injury or improve their snatch pull performance.

Muscles Worked by the Dumbbell Snatch

The dumbbell snatch is a dynamic movement that challenges the entire body to move in a coordinated effort to promote force. Below is a breakdown of the primary muscle groups involved in this exercise.

These are separate muscles, but both the shoulders and the triceps are active in the dumbbell snatch, providing strength and support in both the pulling and overhead lock-out position. Additionally, the smaller scapular stabilizers are called upon to provide support during this exercise.

The glutes, hamstrings, and erectors are all responsible for hip extension, which creates the force necessary to pull the load from the ground into the overhead position. Increased rate of force development from your posterior chain can result in heavier loads being snatched overhead.

Benefits of the Dumbbell Snatch

Why bother learning the dumbbell snatch? There’s more than a few solid reasons that you should consider.

Like most unilateral exercises, the dumbbell snatch helps address any muscular imbalances and movement asymmetries that may otherwise go undetected when training with a barbell. During bilateral movements, one side may be doing more work, but you’d never know it. Then, you try a unilateral exercise, and any weaknesses are now on full display.

While the dumbbell snatch may not directly apply to the highly technical barbell snatch, it still enhances shoulder stability, strength, and power for lifters of all levels.

You Can Rep it Out for Better Conditioning

Like the kettlebell, the dumbbell allows lifters to perform longer (time duration) sets and complexes (yes, the barbell can be effective at this as well). When done in a cyclical motion, the dumbbell snatch can be performed for longer durations and often seamlessly transitioned into other dumbbell exercises like windmills, presses, goblet squats swings, etc.; further increasing metabolic demands.

Who Should Do the Dumbbell Snatch

Below are explanations for how strength, power, and fitness athletes can benefit from performing the dumbbell snatch.

For Olympic lifters, the dumbbell snatch can serve as a temporary replacement to their normal training if you’re between competitions or just want to take a mental break from constantly working with the barbell.

The dumbbell snatch can increase overall athleticism and fitness for most average gymgoers. It can be done for strength and power, to increase muscular coordination, or as a means of improving your metabolic fitness. It’s a surprisingly versatile exercise, even for trainees who don’t want to compete in a strength sport.

You don’t need a barbell to become powerful. While dumbbells lack the serious loading potential of a standard bar, they make up for that deficiency by being accessible, versatile, and even easier to keep in your home gym.

As such, the dumbbell snatch is a portable, high-performance movement with a learning curve that is suitable for new exercisers and veteran athletes alike. Give it a shot — your heart rate and muscles will thank you, just not while you’re grinding through each rep.

Can I do the dumbbell snatch as a beginner?

Absolutely. The dumbbell snatch is a great move for beginners. It naturally limits the amount of weight you can use, so it’s less taxing and dangerous than other snatch variations. The dumbbell snatch also lets you master the movement pattern with less weight, and the dumbbell also lets the lifter move their joints in a more comfortable way than being locked into a barbell.

Do you need to squat all the way down in a dumbbell snatch?

It depends on your training goals. If you are in a competition, says CrossFit Open Workout 21.2 you do not need to squat fully in the snatch because it’s not required. That said, if you are in training and want to increase your leg training volume and challenge your shoulder stability and mobility, adding the squat is beneficial.

Can you do a dumbbell snatch with two dumbbells?

You sure can. To do this variation, you perform the dumbbell snatch as instructed above, but holding a dumbbell in each hand. You can do this to increase the movement’s complexity, challenging shoulder stability, or progress into other movements like the Devil’s Press.