Use the Snatch Balance to Perfect Your Timing and Speed

The snatch balance is great tool to enhance your weightlifting technique.

Perfecting the snatch takes time, dedication, and a highly detailed approach to addressing technical faults and weaknesses. One exercise that can drastically enhance a weightlifter’s, CrossFit athlete’s, and general snatch enthusiast’s snatchability is the snatch balance. The lifter presses a loaded barbell (held with a snatch grip) from their shoulders (behind their head) to overhead. As they press the weight, they’ll drop down into a deep squat. This movement essentially strengthens the lockout phase of your snatch.

Below, we go over how to do the snatch balance, variations of the movement, and break down who should even do this specific move.

How to Do the Snatch Balance 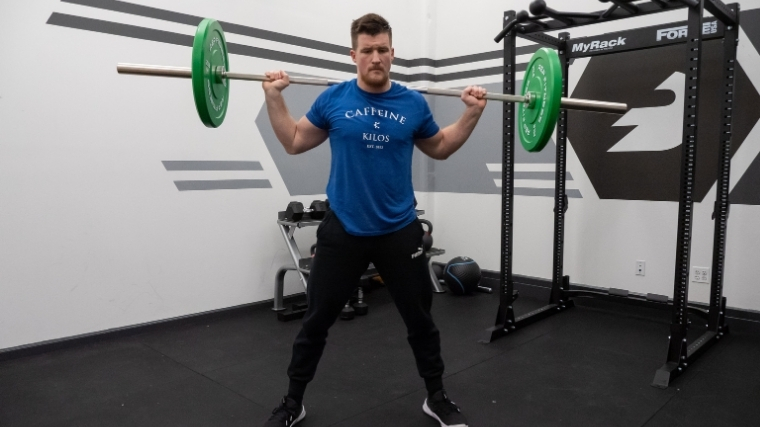 From a squat rack or jerk blocks, unrack a loaded barbell on the back with the hands in the snatch grip. Set the feet so that they’re slightly wider than hip-width apart, and tense your back muscles so that you have tension between the shoulder blades and the upper back.

Form Tip:  The elbows should be down towards the ground or slightly pointed back. That said, be sure not to flare them too far back, or the upper body will collapse forward. 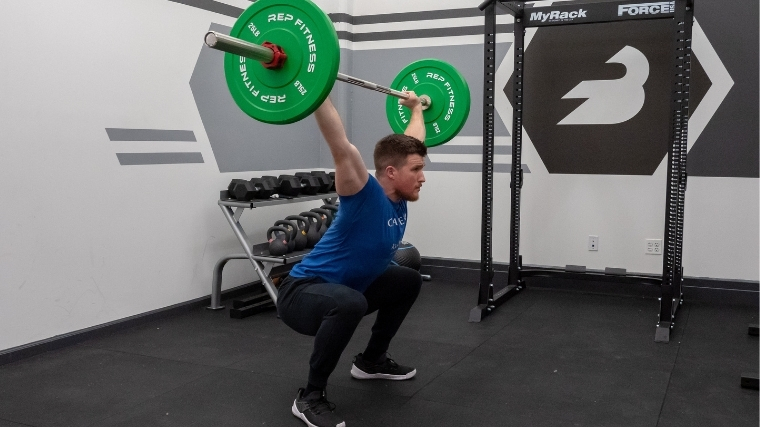 The dip phase of the snatch balance should be identical to the dip phase of a behind-the-neck jerk or push press. Simply bend your knees a few inches and then explosively stand up and extend upwards through the barbell, throwing the bar off your upper back.

Form Tip: Be sure to dip under control. The speed of the dip is not as important as one would think, so be sure to dip quickly, but so quickly that the barbell becomes disconnected from the traps.

Step 3 — Receive the Barbell, Then Stand Up 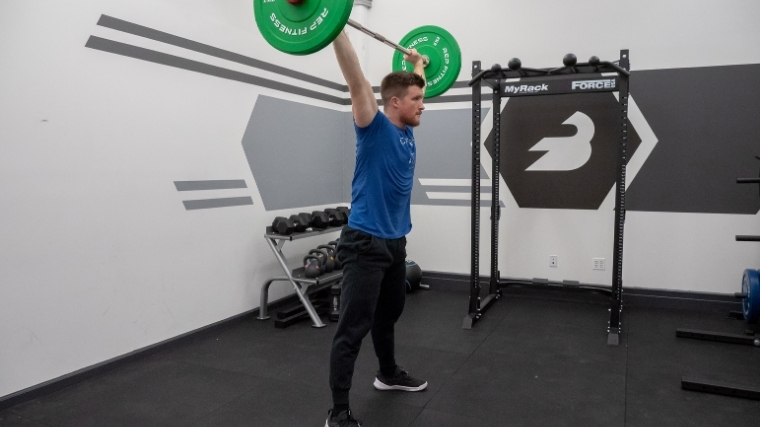 After you drive the barbell off the body, quickly move your feet outwards into your overhead squat stance, and extend the elbows as fast as possible. You should sit low into the overhead squat. Fully extend your elbows and reach the arms into the barbell as the bar meets you. Once you have stabilized the barbell overhead in the deep squat position, stand up out of the squat to complete the lift.

Form Tip: Think about jumping the barbell off the traps while also pushing upwards and into the barbell with the arms.

Benefits of the Snatch Balance

The snatch balance is prevalent, as you can probably guess, among weightlifter. That’s not to say other gym-goers can’t benefit from it. Below, we highlight three snatch balance benefits to mull over if you’re considering adding this movement into your routine.

Confidence in the Receiving Position

The ability to quickly and confidently drop into an overhead squat receiving position requires mobility, timing, and speed. While a lifter can train these abilities separately, it’s also important for weightlifters to train these traits in the position they want to be successful in. So, if you’re looking to be faster and more mobile at the bottom of the snatch, it would behoove you to practice a snatch-specific movement that allows for you to be fast, mobile, and technical.

The speed with which a lifter can attain a stable and fixed position under a loaded barbell will drastically affect their snatch ability. Speed and timing must be developed, and these factors are often neglected. It’s not unusual to see a lifter try and pull the weight higher instead of improving their ability to sink deeper into the squat position of a snatch.

Muscles Worked by the Snatch Balance

Below are the muscle groups worked during the snatch balance.

The traps work to stabilize and support the barbell in the overhead squat position and are largely active in the snatch, jerk, and snatch balance.

Your arms are driving weight overhead, so your extensor muscles, the shoulders and triceps, are pretty active in the first phase of the snatch balance. When it comes to supporting the weight overhead, your shoulder stabilizers are at play here more than the muscles’ contractile tissue.

The scapular stabilizers and posterior shoulder muscles work together to improve shoulder stability during this ballistic overhead movement. Increased scapular stabilization will also help minimize excessive strain on the elbows, wrists, and shoulder capsules during any movement that involves the shoulders.

The lower body as a whole is trained in the snatch balance as the legs are used to absorb the load as the lifter moves under the bar (eccentric loading), and also concentrically work extend the knees and hips during the drive phase and to stand up out of the overhead squat.

Who Should Do the Snatch Balance?

The below section breaks down who even benefits from doing snatch balances.

The snatch balance is a great movement to develop speed, aggression, confidence, and timing under the snatch and into the deep overhead squat position. This is a helpful exercise for weightlifters who struggle with overhead stability, overhead strength, or with snatches crashing down on them as they catch them. This can be trained with moderate loads (60-80% of snatch max) for speed and technique, 80-100% of snatch max loads for maximal strength and aggression, and even 100-110% snatch max for strength and confidence.

The snatch balance is a particular movement that’s mainly beneficial for Olympic weightlifters and fitness athletes who compete with the snatch. Outside of those populations, the snatch balance has little application to other areas of strength and fitness. For that reason, it is not recommended outside of weightlifting or fitness workouts geared to improve snatch technique.

The same benefits that weightlifters reap apply to the general population and CrossFit athletes who need to know how to snatch for competition. That said, if you’re not specifically interested in weightlifting, then you’re fine ditching this exercise.

There are really only two ways to program the snatch balance — for better technique and more overhead strength. The snatch balance is not an exercise you should use to pack on muscle mass or improve your conditioning.

For technique development, start with lighter loads and build up speed and aggression so that you meet the barbell in the low and stable overhead squat position, with the elbows fully extended. From there, add load yet remain fast and explosive under the bar. Do three to five sets of two to three reps with 50-80 percent of your snatch max.

To Gain Overhead Strength for the Snatch

The snatch balance can increase overhead strength and peak snatch performance when heavier loads are used. When programming the snatch balance for maximal strength and transfer to heavy snatches, lifters can train with 80 percent or more of their one-rep max and even loads that exceed their snatch max. Do four to eight sets of one to two reps.

Below are two snatch balance variations that coaches and athletes can use to improve snatch technique.

The heaving snatch balance requires the lifter to start with the feet in the overhead squat stance in which he/she does not move the feet outward. The heave variation increases the ability to stay vertical in the receiving position while also increasing the speed and timing underneath the bar in the snatch.

The drop snatch can be thought of as a snatch balance without any dip and drive phase. This is a challenging snatch balance variation as it requires the utmost speed and aggression by the upper body and proper footwork to assume a low and stable position at the bottom of the squat. This helps lifters who lack speed under the barbell in the snatch or struggle with their elbows buckling in the bottom of the snatch.

As the name implies, the snatch push press is essentially a push press with a snatch grip. This is an even more broken-down version of the snatch balance, which has the lifter focus on just driving the bar overhead. If your goal is more shoulder muscle, then stick with other pressing variations.

Like the snatch balance, the tall snatch minimizes the window of time a lifter has to get low and stable under a barbell, making it more difficult for them to get fixed properly. This, in combination with a steady diet of snatch balances, could be a great one-two punch for lifters who have the weight collapse on them in the snatch when they go into the overhead squat position.

How much should I be able to snatch balance?

How low should I squat during the snatch balance?

The lower you can squat with control and stability, the better, as this transfers well to heavy snatches. If your goal is to snatch as much weight as you can, then you want to get used to and good at receiving loads in a low and stable position.

Is it OK to snatch balance with heavy weights?

Yes, it is actually recommended. Be sure to read the programming note above to see how to properly program snatch balance for technique development and maximal strength and transferability to heavy snatches.