13 Undeniable Benefits of the Snatch

There are full-body exercises, and then there’s the snatch.

It’s a phenomenally difficult exercise that can require years to properly master, but when performed correctly, it could provide a wider array of benefits than any other single exercise.

Most folks know that weightlifting makes you “strong.” There’s more to it than that. 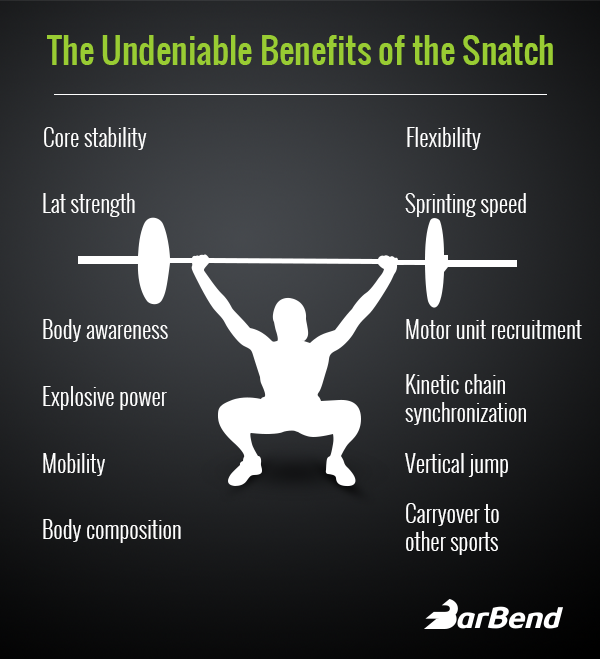 Put simply, proprioception is an awareness of where your body is situated in space. It’s a big deal: not only does better proprioception reduce the risk of injuries, including minor injuries like ankle sprains, there’s evidence that it can improve brain function.

One German study, for instance, found that after just two sessions of balance training to improve proprioception, its subjects started developing more gray matter, which is linked to improved memory, attention span, and learning abilities.

We’ve said it before: core stability is more important than core flexion, and flexion is all you learn if you just practice sit-ups and crunches. But the more stable the core is, the more efficient you are and the more you can prevent force leakage during your movements.

It also means you’ll be better at resisting force and flexion, so snatch proficiency – contrary to popular belief – can reduce your risk of back injuries.

The snatch happens fast. The lifter has only the briefest of moments to pull him or herself under the bar while jumping under it to catch it before it starts accelerating to the floor. Perhaps because nothing makes the body learn a skill like the risk of a heavy weight dropping on its head, weightlifting teaches lightning-fast reactive times, which is a skill that transfers to everything from football to boxing.

Why is force so important? It’s a pretty complicated topic in physics, but a heightened ability to produce force means an athlete is able to move a weight faster, more efficiently, and in a more coordinated manner. That translates to less fatigue during exercise and a lot more power.

Because athletes that perform snatches can generate high rates of force development, the movement also translates to higher rates of acceleration, which is why Olympic weightlifting is often included in training programs for sprinters.

Box jumps are great and all, but if you want a serious vertical jump, snatches are a must. Among other components, the snatch involves “jumping” with a serious amount of added resistance, so it provides a better stimulus than plyometric exercises alone. The movement’s combined benefits of agility, explosive power, speed, and motor unit recruitment translate into a jump that Jordan would be proud of.

The ability to decelerate, change direction, and re-accelerate is vital in most sports, and the snatch can help. It develops agility and both linear and multi-directional speed, which means that despite the heavy weights, it produces an athlete who is incredibly light on his or her feet.

Every muscle fiber in your body is a part of a motor unit, and the central nervous system (CNS) is like the command center. The CNS can be trained, and the Olympic lifts train it to fire a maximum number of motor units in the shortest possible time.

The kinetic chain refers to a “combination of several successively arranged joints constituting a complex motor unit.” Plenty of sports encourage a kinetic chain that fires and functions well, but the wave of contraction that a lifter needs to create to perform a snatch is unparalleled in terms of how much it accomplishes in such a single movement.

9) Carryover to Other Sports

Because of all these benefits, particularly the way it requires athletes to generate large amounts of power at high velocities, the snatch is a staple for many sports that require powerful, full-body movements like throwing, sprinting, running and jumping.

It’s worth pointing out that given the complexity of the movement and the fact that many injuries tend to occur during the catching portion, some coaches recommend athletes just focus on the pulling portion of the lift.

As far as building muscle and losing fat goes, there’s a pretty stark difference between Olympic weightlifters and powerlifters. Because the move requires so much speed and energy expenditure, the snatch can seriously jack up the metabolism and burn a lot of fat.

Because it uses so many large muscle groups, it’s an efficient exercise for providing a full-body strength workout. That means it can provide stimulus for hypertrophy, too. The hypertrophy component is a little dependent on training styles, but even weightlifters who train in the lowest of reps have serious slabs of muscle on their back and legs.

As a dynamite exercise for improving the strength, function and coordination of the posterior chain, the snatch can help you attain the posture of a military soldier: straight back, shoulders retracted, tight core, and much, much, much better back health.

Due to its overhead nature, some folks have a misconception that the snatch primarily a pressing exercise, but it’s all about the pull. The lift requires pulling the bar into you hard, with your arms straight, which seriously engages the lats, and once the bar is overhead it becomes an excellent isometric exercise for the lats. So, there’s serious carryover from the snatch to all pulling exercises, including the deadlift.

The snatch is the ultimate test of mobility. It challenges the range of motion of almost every body part, but in particular the ankles, shoulders, and hips, more than perhaps any other exercise. A good squat and a good strict press does not necessarily translate into the perfect snatch, but a good snatch means you’ve reached some of the highest peaks of mobility. Train for the snatch, and many other movements will fall into place.

10 Competitors With Some of the Best Arms in Bodybuilding