High-Bar Versus Low-Bar Squats: Their Differences and When to Use Them

There are two main squatting techniques utilized by strength athletes, and they’re known as high-bar and low-bar. Both squat forms rely on different movement mechanics and transfer of forces.

In most cases you’ll see high-bar squats used by weightlifters, CrossFit® athletes, and recreational lifters. Low-bar squats are frequently used in powerlifting and strongman-style training, though there are exceptions both ways. The reasoning behind a strength athlete’s squat choice is typically dependent on their training and competition goals.

The fundamental differences between each squat are pretty easily identifiable, but newer lifters may struggle when choosing between the two. This article will discuss the differences of each squat, how to use them, and why you should pick a low-bar or high-bar style squat.

One of the main differences between the low-bar and high-bar squat is bar placement on the back. The high-bar squat has the bar lay on top of the shoulder, just below the C-7 vertebrate. A lot of times you’ll hear people cue high-bar squat placement by saying, “Use your traps to create a shelf for the bar.”

Alan Thrall’s video below does a great job at quickly explaining the differences in movement mechanics between each squat.

The table below is a brief summary of fundamental differences in body positions between each squat. Everyone’s form will be a little different due to anthropometric differences, but for the most part each squat will resemble similar key positions. 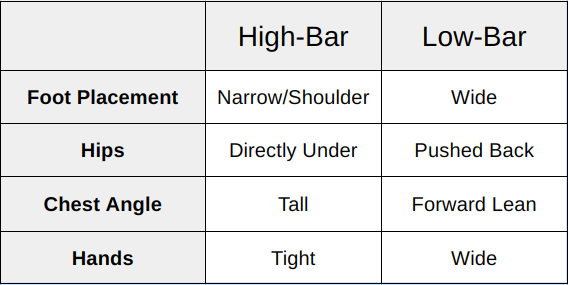 When to Use High-Bar

High-bar squatting is great for multiple reasons. It’s essentially the most basic form of squatting and resembles the “athletic position/stance.” For example, if you asked someone on the street to drop into a squat, chances are their body position would mirror a high-bar style squat. The high-bar squat will have beneficial transfer into weightlifting and most sports.

In regards to high-bar and low-bar squat benefits, I reached out to William Quillman, CSCS, USAW, for insight who’s a Strength & Conditioning Coach based in Colorado Springs.

“Weightlifting involves two movements, the snatch and clean & jerk. When squatting, one should try to be as specific as possible to have a high transfer over into the competition movements. The high-bar squat is commonly used in weightlifting, as this squat style allows an athlete to train in similar torso, hip, knee, and ankle angles similar to competition movements,” states Quillman.

When it comes to sports, the athletic stance is a commonly used term to describe starting and movement positions. This position involves the athlete standing with feet typically shoulder width apart, hips under them, and knees slightly bent. A high-bar squat will help an athlete strengthen their body in both their athletic stance and when they’re moving through this position.

When to Use Low-Bar

The low-bar squat is utilized for typically two reasons: To move more weight and to increase load on the posterior chain. This squat style loads the posterior chain more by forcing the hips back to handle, absorb, and produce force better. This in return creates a forward lean of the chest and allows an athlete to lift heavier (upright torso can limit the body).

“Low-bar squats are used in powerlifting because it’s a way to express strength in the squat movement. The torso can be more horizontal while loads shift more into the posterior. This shift allows the glutes and hamstrings to become more involved and requires less range of motion than the high-bar squat. This makes this squat style easier to perform and typically allows the athlete to lift more,” Says Quillman.

When the hips are forced back, the knees take less stress, which shortens the range of motion they go through (not as forward over toes). This in return, shifts a lot of the weight’s stress into the hips, glutes, and hamstrings. The hamstrings will then pull back on the tibia (bone in the lower leg) and balance the force placed on the knee. For this reason, low-bar squats can be beneficial for athletes with knee issues.

A study published in 1996 compared the differences between the high-bar and low-bar squats at both parallel and deep squatting positions. Researchers used eight Swedish national class weightlifters and six national class powerlifters. They compared both squat styles with 65% of each athlete’s 1-RM load in both positions (parallel & deep).

They compared peak force outputs of the hip and knee joints, and electromyography (EMG) ratings of the vastus lateralis (outside quad), rectus femoris (upper mid-quad/hip), and biceps femoris (outside hamstring) in both positions.

The powerlifters were able to produce higher peak force in the hip joint, while weightlifters created more force in the knee joint. In regards to the EMG ratings of parallel and deep squats, researchers noted a few differences.

Authors discussed that EMG ratings were individualized, which suggests differences in anthropomterics among athletes. In the three muscles observed, they note that the biceps femoris had the highest ratings in each squat, but also the biggest levels of individuality. Both squat styles prove to be efficient methods for strengthening the lower-body.

At the end of the day, both squat styles can be beneficial in your training. I personally utilize a 75/25 split of high-bar/low-bar squats. My goals lie in strengthening my Olympic lifts currently, so I high-bar squat 75% of the time, and leave 25% of my training for low-bar squats. These change as my training goals shift. For me, it’s important to be strong in both movements, as they require different mechanics to create force in the lower-body. This balance will create a body that produces force in multiple squat positions.

Choose the squat style that most closely corresponds with your training goals. If you’re primarily a weightlifter, then the high-bar squat will be a better choice. For athletes in sport, they might also find the high-bar a more suitable choice in regards to transfer of gym to in-game performance.

Powerlifting and strongman style training rely on the body moving supramaximal loads, which makes the low-bar a more suitable option. The body can load weight better in the hips with a torso that’s more horizontal. Also, for those with knee problems, the low-bar squat may be a more viable choice.

2 thoughts on “High-Bar Versus Low-Bar Squats: Their Differences and When to Use Them”