How to Wear and Use a Lever Belt

Belts are used by a variety of lifters and come in multiple styles. Some of the most popular belt styles include velcro, single-prong, double-prong, and lever. Each of these styles will benefit different athletes at different times.

When it comes to powerlifting specifically, the single-prong, double-prong, and lever belts are often the go-to’s. These belts tend to provide the greatest level of support, and are typically made of a stiff rigid leather. The lever belt is on the more unique end of belts due to the way it fastens, and this belt style can be intimidating for the newer lifter.

In this article, we’re going to dive into the lever belt, how to wear it, and how to adjust its tightness for working sets and competition. To assist with lever belt questions and concerns, I reached out to John Gaglione, strength coach and owner of Gaglione Strength in Farmingdale, New York.

[Looking for a new belt to support your strength sport? Check out our in-depth belt review round-up!]

When to Where This Belt for Training

Like most supportive strength equipment, a belts use has a time and place in training. It’s not something that should be worn every day, and when it is, there are ways to do so more efficiently.

Gaglione provided some insights into what he recommend for athletes, “As a general rule of thumb, if it’s a heavy day of training, then I advise putting on a belt fairly early on during warm-up since the belt can alter mechanics a bit. When using a lever belt you might just put it on at first and not latch it for the first few warm-up sets.

This can give lifters a great tactile cue to really hone in their breathing and bracing in all directions (front side and back). As a general rule I tend to crank the belt tighter the heavier the weight gets to get more support.”

Freak of the Week goes to @mikey_lifts_it ! Mike out over 50 lbs on his total with a 391 squat 319 bench and 418 deadlift in the 148 class! Really proud of his progress and I know the best is yet to come! Great work Mike! #gteam #gaglionestrength #powerlifting #squat #bench #deadlift

A powerlifter may find that they prefer their belt in different positions on their torso during various lifts. The point of a belt is to provide maximal support in areas an athlete needs it most at different times, so finding your optimal belt torso positioning is crucial for success. Experimentation with a belt is all part of the process of finding your unique fit.

Gaglione states, “For squats, I tend to wear the belt a bit higher because if I bring the belt to low, then it can affect my ability to hit depth and kind of bunch up into my hips.

For deadlifts, I like to wear the belt lower on my back to get more support in the area I need it. Other lifters like Stan Efferding and Eric Lillibridge prefer to wear the belt pretty high up for deadlifts. It really comes down to personal preference and where you feel like you’re getting the best support.”

Freak of the Week goes to @wheelzz__ ! Nick added nearly 200 lbs to his total going 9/9 hitting all time PRs in each lift and broke the 700 barrier for the deadlift with 725 ! Nick is a good example he has actually had to pull back on his training and his lifts sky rocketed. We can all learn from Nick just because you can doesn't mean you should ! Save your big lifts for the platform ! Super proud of Nick for trusting the process and sticking to the plan! He executed perfectly ! This kid has a bright future in this sport ! #gteam #gaglionestrength #deadlift #squat #benchpress #powerlifting #RPS

Torso length and where your back is strongest (stronger upper back versus lower back for example and overall core strong) can all play a factor.

[Thinking about investing in a lever belt? Check out our Pioneer Fitness 13mm Lever Belt review.]

Adjusting a Lever Belt’s Tightness for Your Needs

Since a belt’s tightness can impact mechanics and bracing, Gaglione pointed out the importance of marking your belt’s different settings. He says, “Since your belt’s positioning can change for various lifts, I would recommend marking the belt with different settings that you prefer for both squatting and deadlifting, as well as heavy sets versus volume and/or speed work.

You will need a different tightness for different intensities (% of 1-RM). Some experts even advise using a different belt entirely for deadlifts. Some bigger athletes prefer a softer belt. For example, when you have a big belly adding a belt that is too thick can sometimes hinder start position. Some lighter men and women with short torsos prefer using a tapered belt or a thinner belt since they don’t need as much material to cover their torso.” 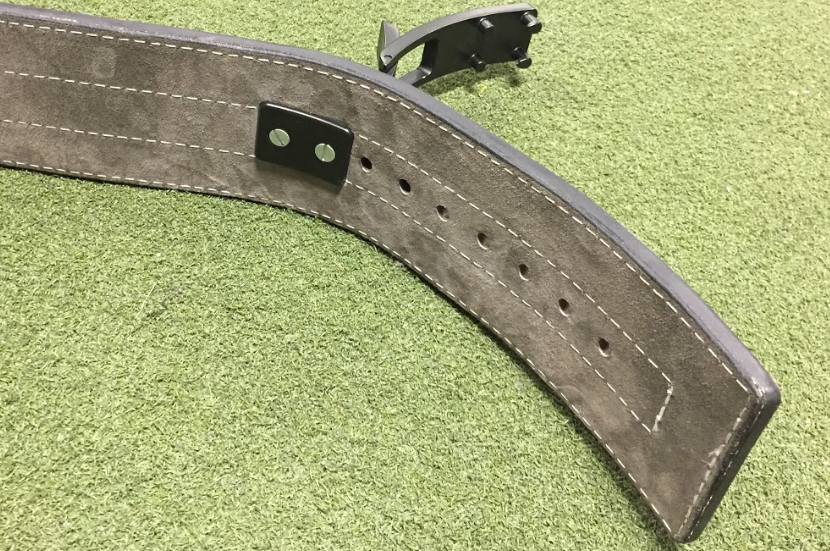 Since a lever belt is unique because of the way it’s fastened, Gaglione pointed out the importance of always having the right tools with you and said, “Always have a screw driver on hand just in case you need to adjust. Sometimes having a big meal or drinking a lot of water can alter your setting. This is especially true if you cut weight because this can alter the feel of your equipment, and you want to be dialed in when you get on the platform.”

The lever belt is a piece of equipment designed for a very specific purpose, and that’s to provide a rigid level of support. It’s not a belt designed for multiple strength activities, but it offers exceptional support for the lifts it’s designed for. If you’re new to this belt, or belts in general, then it’s best to experiment with multiples levels of tightness and placement during workouts.

Terry Hollands Out of 2021 World’s Strongest Man, Retires From WSM