Do the Incline Bench Press for a More Complete Chest

The bench press is a chest day staple. It recruits muscle fibers in your chest, triceps, shoulders, and back even. However, by pressing from an incline, the tension shifts to the upper chest fibers and more of the shoulders.

We’ll go over the proper form, variations and alternatives, and detailed benefits in our incline bench press guide.

How to Do the Incline Bench Press

The step-by-step form and technique guide is for the incline bench press, using a barbell. Note that most of the steps are similar if you were to use dumbbells or a specialty bar. However, some slight technique adjustments may occur — mainly with how you grip a specific implement. 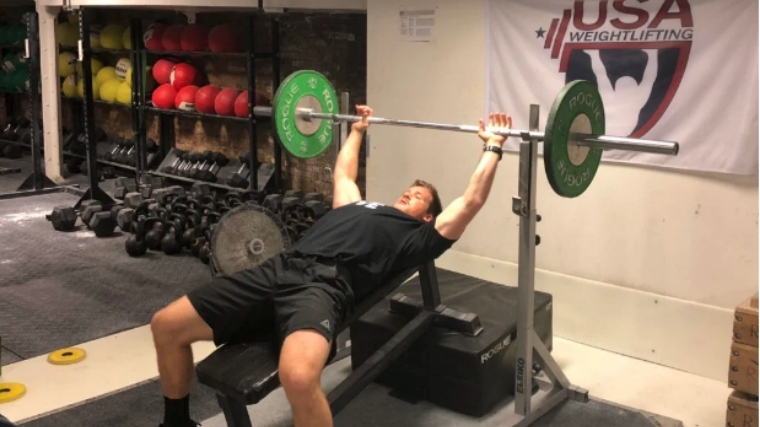 If you’re manually setting up an incline workout bench in a power rack, then set the bench to about 45 degrees. Load the bar, and lay back on the bench under it. Set the hips and upper back on the bench, with the feet strongly rooted into the floor.

Form TIp: Actively press your knees out. This will activate your lower body — namely, your glutes and quads — which will allow you to drive the weight off of your chest. 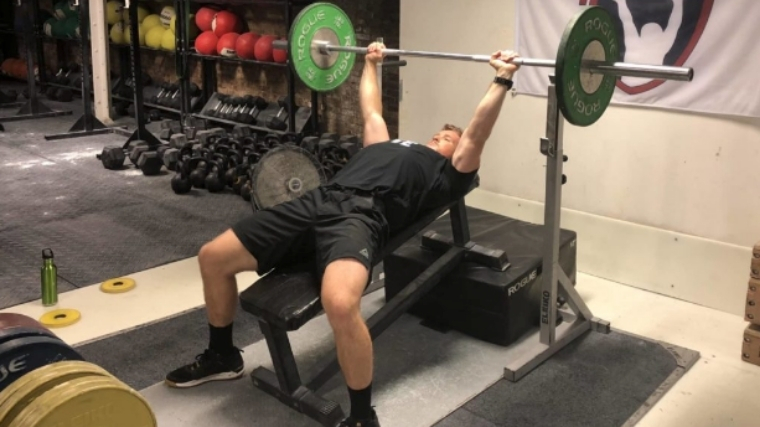 Your hands sit on the bar comfortably is different for each person but generally speaking, the hands should be slightly wider than shoulder-width. A good rule of thumb is that the forearms should be perpendicular to the ground at the bottom of the bench press. Too wide or too narrow of a grip width will result in the forearms angling outwards/inwards.

Form Tip: Find the smooth ring on the barbell that sits in the knurling. Use that as a guide to measuring your grip. For some people, they place their pinky over the ring and some their ring finger. When you find a comfortable grip, check to see where your fingers are aligned with the ring so you can replicate it next time. 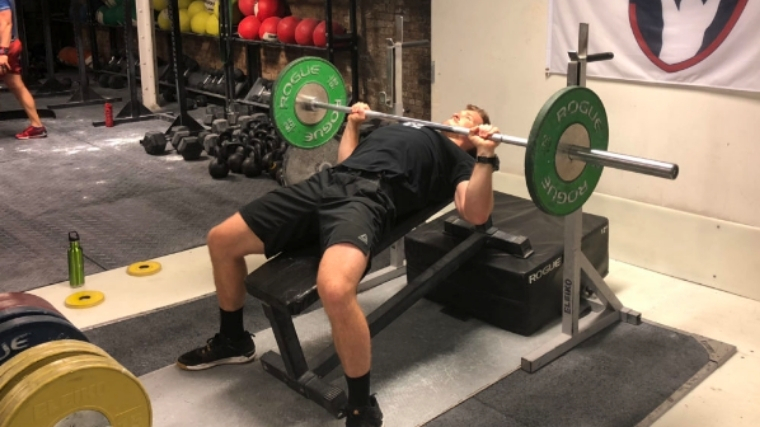 Unrack the barbell so that the bar is stabilized above the upper chest/shoulders. To stabilize this position, forcefully retract the shoulder blades and squeeze the barbell to better activate your grip. Pull the barbell to the chest, actively use the back muscles to keep the chest and shoulders from rounding forwards. As the bar is lowered, the lifter should actively stretch the pectoral muscles, making sure to keep the shoulder back on the bench.

Form Tip: Do NOT let the bar drop to your chest. PULL the bar towards your chest. Think of your lat muscles as a spring that you’re loading up for more pushing force. 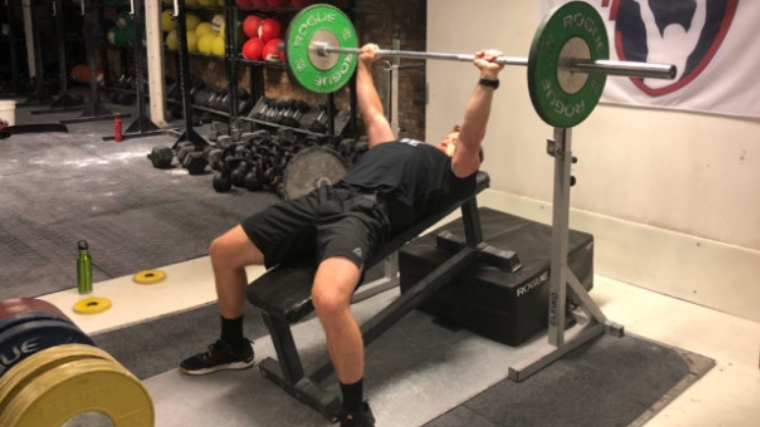 While keeping the elbows pulling inwards towards the body, press the bar upwards and extend the elbows. Be sure not to lose control or stability in this phase. Generally speaking, the elbows should not flare out, and the shoulders should stay back on the bench.

Form Tip: Another way to keep your lower body engaged is to keep your feet rooted to the ground and twist them outwards (without actually moving them).

The below muscle groups are targeted while performing the incline bench press.

The chest muscles are worked during most bench pressing movements. However, the incline press does place higher demands on the upper chest muscles due to the press’s increased angle in the press (more vertical, typically 15-45 degrees from horizontal).

Like the bench press, the front deltoid is active in the incline bench press, however, to an even greater extent. As the lifter assumes a more vertical pressing plane, they will target the upper chest and the anterior deltoids. If they were to press in a completely vertical overhead fashion, most of the movement would target the deltoids as a whole (shoulders).

The triceps work to extend the elbow in the top part of the press. By performing an incline bench press, the triceps are worked similarly to the flat bench press. Lifters and coaches can diversify triceps pressing strength by adding in this exercise to challenge different pressing ranges of motion and aid in lockout strength.

Benefits of the Incline Bench Press

The incline bench press is a movement that has the ability to be trained with heavy loads and high volume, making it a very effective multi-joint, compound lift for developing strength and hypertrophy. Coaches and athletes can use the sets, reps, and weights guidelines below to individualize strength and hypertrophy programs better.

The bench press targets the pectoral muscles, regardless of whether the lifter is flat, on a decline, or an incline. However, the incline bench press can isolate the upper pec fibers to a greater extent due to the increased angle at which the lifter is positioned, making it a good move to develop weaker ranges and aspects of the chest.

Athletes can use the incline bench press to diversify their pressing strength and performance. By switching up the angles of pressing variations, athletes can often target sticking points, address muscle weaknesses, and stimulate new muscle growth.

Who Should Do the Incline Bench Press?

Here’s a more in-depth breakdown of how the incline bench press can benefit athletes in different strength sports.

Building overall upper body mass and strength is developed through arduous training, variations of the exercise, and addressing all weaknesses. The incline press can be used to bridge the gap between the flat bench press and the overhead press to help lifters train all pressing movements throughout the most common angles seen in sport.

The incline bench press can also target the upper pectorals, triceps, and shoulders in a slightly different way to stimulate new muscle hypertrophy and strength gains.

Like other pressing movements (overhead press, dips, flat bench press), the incline bench press can increase overall upper-body pressing strength, muscle mass and address any weaknesses lifters may have with lack of size or strength in the torso.

In weightlifting and competitive fitness, the chest, triceps, and shoulders must produce high amounts of force to accelerate loads overhead, stabilize loads overhead, and even produce force during front rack positions and gymnastic movements.

Bodybuilders are judged both on their size and symmetry. Judges are trained to suss out even the most minor details of a physique

Here are the set and rep schemes you should follow if you want to get bigger, stronger, or build muscular endurance.

The incline bench press can be done using both heavy and moderate loads for a mixture of low to moderate volume work sets with moderate rests. Do three to five sets of six to 12 reps with moderate to heavyweight. Or, do two to four sets of 12 to 15 reps with a moderate load until failure. Rest for just 45 seconds between sets.

The incline bench press can be done in a similar format as most strength lifts, with coaches and athletes using moderate to heavy loads for low to moderate rep ranges with longer rests. Do three sets of five sets of four to six reps with a heavyweight. Rest two minutes between sets.

The below sets, repetition, loading, and rest period recommendations can increase muscle endurance and/or muscle hypertrophy (due to decreased rest periods and high volume). Do two to four sets of 15-20 reps with a lighter weight. Rest for 30 seconds between sets.

Below are three effective variations you can use to break up the boredom and provide a new stimulus for the same incline bench press benefits.

The dumbbell incline bench press is very similar to the barbell incline bench press; however, it does have key benefits to maximize muscle growth and further individualize a program. For some lifters, the barbell’s placement and the positions that the shoulder (angle) is forced into may produce pain or discomfort in the press, limiting the amount of muscle loading and ability to train. Using dumbbells, a lifter can manipulate the angle of the weights, wrist, elbows, and shoulder joint to accommodate any issues/pain/or shoulder flare-ups.

Additionally, the dumbbell incline press is a unilateral exercise, meaning it can be done to address movement asymmetry and muscle imbalances that may be negatively impacting shoulder health, chest development, and/or pressing performance.

Like the double dumbbell incline bench press, the single dumbbell variation can increase the lifters need to support and stabilize a load unilaterally. Using a single dumbbell, the lifter must control and resist spinal rotations and other rotational forces to the body. Some lifters also find that they can truly focus on contracting the muscle as hard as possible when training single-hand pressing.

Tempo repetitions can increase time under tension, enhance motor recruitment, and force lifters to slow down to load the muscles better and save the joints. Common flaws seen with the incline bench press are lifters too often drop the weight on the body, (2) lifters bounce it off the chest, and (3) lifters are in no way concerned with the position of the shoulder and elbows in the bottom of the press (which can result in injury to the shoulder or discomfort). By forcing lifters to maintain a strict tempo, you increase their ability to control the movement, load the muscle, and maximize muscle growth without using heavy loads.

Below are three incline bench press alternatives that coaches and athletes can use to replace the incline pressing movement yet still target many of the same muscle groups.

The flat bench press is often the most popular movement for the upper body and chest in most gyms. This exercise effectively targets the chest, triceps, and shoulders (primarily the chest). Most powerlifting and strength programs will include the flat bench press in some capacity.

While this exercise targets the shoulders, it can be manipulated to increase the upper pectoral (chest) and triceps development. Increasing the spine’s vertical angle in the press (when going from flat bench to incline bench press to seated shoulder press) shifts the emphasis to the shoulders and less of the upper pectorals. With that said, this exercise can be a way to diversify pressing strength to increase strength in all forms of pressing.

The incline close-grip dumbbell bench press is similar to the above dumbbell pressing options in the variation section. However, it slightly changes the incline press into a chest and triceps-dependent movement. By having a lifter press the pair of dumbbells together with the wrists in a neutral position (facing one another), the lifter can keep the elbows closer to the body, limiting the amount of shoulder stress. This can be done to increase upper pectoral and triceps muscle hypertrophy and pressing strength.

Can I do the incline bench press as my main chest exercise?

Should I start or end my chest workout with the incline bench press?

It depends on how you’re using it. For more muscle mass or endurance, which required higher reps to train, do them later in your workout. Since you’re using lighter weight, it won’t matter if your muscles are fatigued. However, if you’re trying to press heavier weight for strength, lead with the incline bench press.

How do I progress my incline bench press?

The same way you progress any lift. Employ a system of progressive overload, be patient, and stick to your plan!