Could You Eat Like a Top Ranked Super Heavyweight Powerlifter?

Strength sports are a few of the occasions when an athlete’s bodyweight can dictate their success, and their failure.

It’s common to hear about athletes gaining weight in the off-season, then cutting to make weight for competition. This is what most people think about when they hear about an athlete’s struggle maintaining weight, but what about some of the heavier athletes like six foot tall, 360 lb, Canadian powerlifter Kelly Branton? 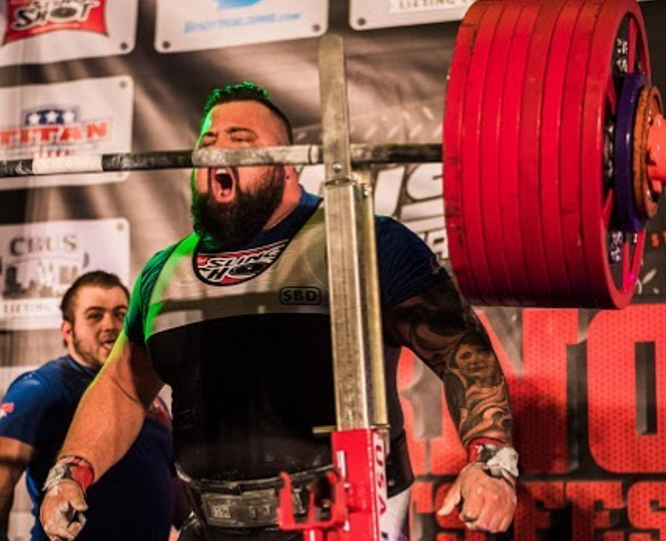 Some athletes, like Branton, aren’t naturally built to be as large and strong as they are. These athlete’s bodies have a tough time maintaining a weight of 300+ lbs year round, while consuming massive volumes of foods.

[Check out what Brian Shaw’s insane 12,000 calorie diet looks like.]

After seeing what professional strongman Brian Shaw consumes on a daily basis, we at BarBend wanted to know what it takes a top ranked super heavyweight powerlifter. We reached out this year’s bronze medalist at the 2017 IPF World Championships Kelly Branton for insight.

BarBend: For background, what’s your current age, weight, and height?

BarBend: How many calories do you eat on a normal day?

BarBend: Do you have set macros, if so, what are they? If not, do you have general macro goals?

Branton: It’s been a constant struggle to continue putting on quality weight, and not just getting fat. I’m never really hungry, and it’s just constant feeding after feeding. The bigger I got, the more I was able to eat. I see big guys who just eat three big meals a day, and stay big. I can’t do that. I have to eat a ton to stay big.

BarBend: Blaine Sumner posted something saying, “we won’t be able to stay this weight & squat like this forever”, in terms of your diet, how does it take a toll on your body?

Branton: Sumner is 100 percent correct. He has the same trouble with maintaining the weight and you can’t stay 350 plus lbs and squat 900+ lbs forever – it’s a time bomb on when your body falls apart.

There is nothing healthy about putting 6-8 huge meals in your body, then asking your body to process it. I eat pretty healthy for a big guy, and I eat a ton of good stuff. But to get this big, you have to throw in some high calorie foods like: pizza, double meat subs, ribs, and burgers, to list a few. I don’t eat those every meal, but they are thrown in especially before a big leg day.

BarBend: Stemming from the above question, how does your body do maintaining the competition weight you aim for? Have you always weighed around the same, or have you pushed it in the recent past for the sake of competition?

2017 IPF World Championship bronze medal 🥉 overall. Congrats to @optimusprime_334 and @jezzauepa. Walking in a squat about 6 weeks ago I strained or torn some of the muscles in my left side near my rib cage. I was unable to squat or deadlift that entire time except for a warmer workout on Monday before I left. I am just happy I could hold it together. I have still not had my huge total yet but it's coming. To many to thank right now I'll make a post later. It's time for 🍻 🍻

If you want to look at me way back in 2010, I competed in the old 242 pound weight class. Maintaining and being this heavy is a horrible task that I truly dislike. Its like I am living in a jail cell, and there’s not much life beyond the gym.

[Branton is pushing his limits on a daily basis and continues to prove why he’s top three in the world. Check out some of his squat progress from the last year.]

But to be quite honest, I would not have it any other way. I like to suffer, it makes me work and train harder. It will all be worth it one day when I win my IPF World Championship. I have mountains in my way, but I don’t have a quitting bone in my body and have yet to have my great meet.

BarBend: To wrap up, could you give an example of what a normal day of eating looks like for you?

Branton: I frequently change it up, but here’s a basic example.

Meal 1: 2 cups of oatmeal, 10 eggs whites, 4 whole eggs cooked together, and mixed up. Plus, some fruit

Meal 5: 10 oz of fish and sweet potato with a salad

Meal 6: Big bowl of Greek yogurt and berries with cereal on top with some honey

Meal 7: Big omelet with veggies, or another shake with PB

And that does not include my intra-workout shake and all the bars/snacks I have in-between.