Chapman, a 45-year-old caterer from Long Island, unseated the reigning champion — and her longtime training partner — Joyce Boone in a match that she had spent five years training for.

It wasn’t a goal she grew up with, but she was always strong. Her day job involves a lot of carrying and lifting and she always put in time lifting weights at the gym. But when Gene Camp, her boyfriend’s uncle and the president of the New York Arm Wrestling Association, asked her to fill in as a receptionist at a few of his matches, she caught the bug.

Even though it’s the go-to method for drunk guys trying to impress each other, and even though it’s the subject of the greatest strength sports movie ever made (Sylvester Stallone’s Over the Top, of course), arm wrestling remains a niche sport. That’s why BarBend sat down with Kerry Chapman to learn more about the hows and whys of women’s arm wrestling. 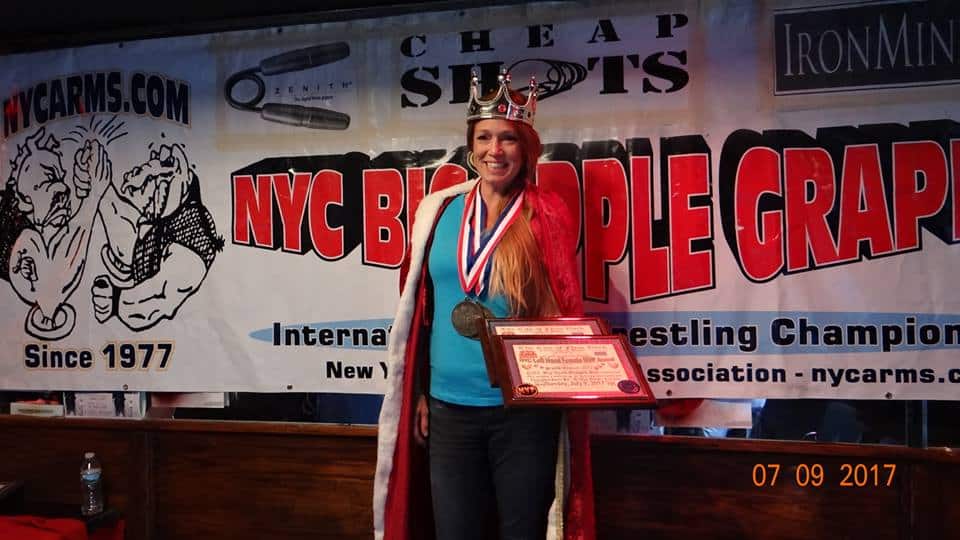 BarBend: How do you train to become New York’s best arm wrestler?

Kerry Chapman: I’m constantly lifting all day long when I’m not driving. I also go to the gym, I do a lot of cardio to improve my stamina, which is really important. I also do a lot of push-ups, that keeps everything in check. I try to do 25 nose-to-floor push-ups per set, and I try to change my position so I don’t just keep my hands far out, I’ll do diamond push-ups and other kinds. I really like to do push-ups. I also do seated rows and lat pulldowns to keep my back strong.

Do you do a lot of grip exercises, too?

I have a gripper, but I don’t use it very often. When I visit some competitors, they have so many contraptions for grip strength, stuff that looks like Freddy Krueger’s hand. I’m not really into things like that.

Chapman engaging in an epic, 4-minute long match in 2011.

What’s the most important exercise for arm wrestling in particular?

I use a resistance band that I wrap around a pole to mimic the pulling motion of an arm wrestling match. I do high reps with lighter weight.

But a lot of it is simply practicing arm wrestling, I pull for a couple of hours almost every week. All of that pulling for so many years changed the whole definition of my forearms, my upper arms, my shoulders, my lats, everything.

What are the most important components of form?

There’s all different ways you can do it. As long as one foot’s on the floor, it’s fine. Some people lift one foot, some wrap their leg around the bar or table, some push off against it. I like to have one foot in front of the other: right foot forward, left foot back. I’ve seen people get their arms broken when they get too creative with form, I try to be more traditional. I just move my hand around to try and bring them down. 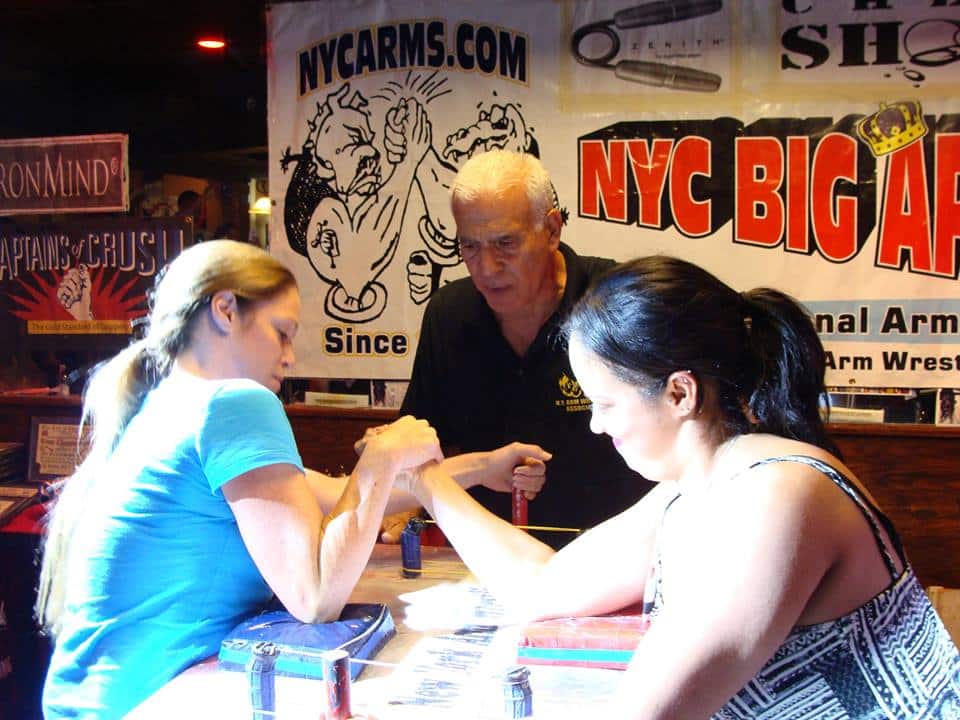 Do you only ever wrestle with the same arm?

No, I use both. It annoys me when people are so strong with one arm but they can’t do anything with their left. People like that often won’t even sign up for arm wrestling contests, because you have a much better chance of winning if you can challenge someone with either arm.

I’m predominantly strong on my left side, so I did a lot better against women who are predominantly right handed. I’m right handed, but my left hand has unbelievable strength. When I started training, I decided I didn’t want to have a Popeye arm, with one big arm and one frail one, so right from the beginning I’ve been going back and forth between the two. I’m stronger on my left, but even if I lose against a right handed opponent, it’ll make me a better puller in the long run. That’s my strategy. Losing makes me better.

This interview has been edited for space and clarity.