Stop Making These 4 Common Lunge Mistakes (Plus How to Fix Them!)

Quality movement will facilitate the most benefits with this exercise!

If we had to line up every lower body exercise in a row and pick them out from best to worst based on usefulness and effectiveness, the lunge would easily make it in the top three if not place number one over — dare I say it — the squat.

When improving lower body strength, power, hypertrophy, coordination, and pretty much anything else, the lunge is one of the best exercises that can be performed. The lunge has carryover to pretty much every sport and has a ton of variations to accommodate for every fitness level and need.

In this article, we’re going to break down four common lunge mistakes and discuss how to fix them. With so many lunge variations, there are obviously more than four mistakes that can be made, but the below tend to be the most common.

The first mistake is something you see newer trainees make most often and that’s slamming the knee onto the ground.

Sure, light knee contact with the ground can be a useful means of counting reps, but it’s not needed for effectiveness and when there’s a “slamming” nature to it, then that’s a pretty good indicator of two things:

How to Fix It: A great first step to fix both cuing and strength/stability issue is to add a prescribed tempo to the lunge. Generally, a 3-4 second eccentric or lowering portion will be a good bet for slowing movement down enough to highlight any form or strength discrepancies.

If tempo is added, but knee slamming is still occurring, then shorten the range of motion slightly and continue working with the 3-4 second tempo. By increasing tempo and shortening the range of motion controlling the descent and strengthening this movement pattern will be much more manageable.

The second common mistake you see with lunges is poor hip sequencing when beginning the shift from eccentric (lowering) to concentric (standing) movement patterns.

In practice, this will look like the hips shooting backwards at the bottom of the lunge before the front leg initiates its contraction. Note, this is also a common issue seen with split squats, too. When this is happening there is usually one of two things going on:

How to Fix It: There are two relatively easy ways to fix this issue. First, try bringing in the length of the lunge stance slightly, think 3-6 inches.

A stance that is too long may result in the hips shooting backwards first because the torso might be too collapsed forward due to the elongated stride, think “good morning lunge.”

The second reason the hips might be shooting up first is poor self-cuing. Try a couple of the cues below to remedy this issue:

3. Leaning Back With Weight

A mistake many beginners fall victim to when using lunges loaded with external weight is keeping the torso perpendicular to the ground or leaning back, as opposed to slightly forward.

Whether it’s a barbell, dumbbell(s), or kettlebell(s), the torso should have a slightly forward lean to it in the lunge (10-20 degrees is usually a good bet). This slight change in torso position will then help facilitate two things that we want from whatever lunge variation is being performed:

A straight up and down or leaned back torso position will limit the above two factors in the lunge.

For a similar example, the above concept is like sitting too far back into the heels during the squat. In the squat, this can cause the quads (prime movers) to lack their full use and cause the hips and torso to have poor alignment — it’s the same idea for the lunge. 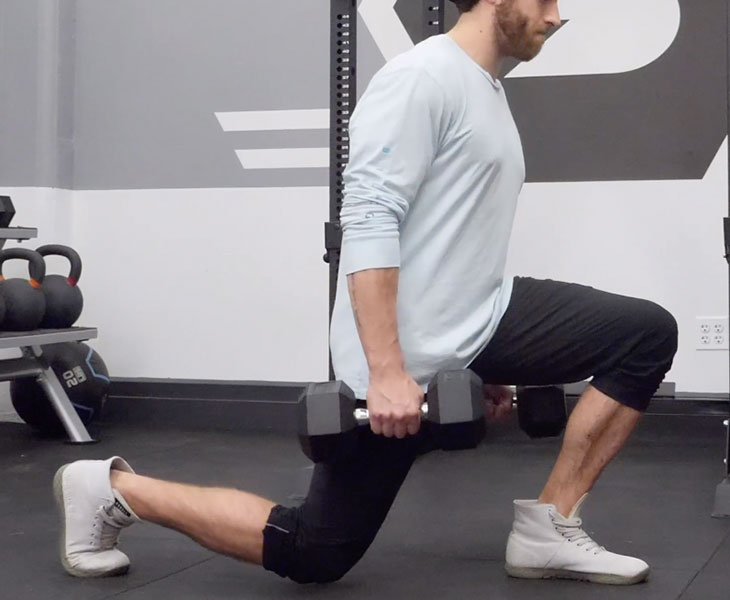 How to Fix It: Two relatively easy ways to promote proper torso positioning in the lunge is to establish position first and slow down the movement. Instead of simply stepping out and moving through the motions, hollow out the core and slightly brace just before the lunge is initiated and this will help promote a slight forward lean.

Once the torso hollowing happens, slow down the tempo to ensure weight is being productively displaced onto the front leg and there isn’t a shift in torso positioning throughout the exercise.

The final lunge mistake we’ll discuss in this article is opening (externally rotating) the hips at any point in the movement. This could be the result of biasing a weakness or compensating for an imbalance.

If the hips are opening, then engagement of the glute medius and adductors may be amiss, which is counterproductive for the lunge’s use in training. Generally, this will be an issue that starts during the first portion of the exercise and stays consistent throughout.

How to Fix It: Start with the right alignment before you move. Often times, this form issue can be easily fixed by remaining mentally cognizant of the hip’s positioning before any movement occurs.

When initiating the lunge, think about keeping the hips square the whole time as if there are two headlights on each side of the hips and you need them to point directly forwards.

If this mental cue doesn’t help, then try adding a pause at the bottom of the lunge, then checking in with hip positioning.

On the opening hip leg, is the hip rotating outwards? If so, that’s a good indicator that the hip is externally rotating at some point in the movement and the glute medius are likely disengaging (you’ll usually feel this), so during the pause, pull that hip back in, then complete the contraction.

By adding a pause, there will be an extra level of control and mental cognizance added to the exercise that can sometimes be passed up on when the lunge is performed at normal speeds.

The lunge is a fantastic exercise for building lower body strength, power, hypertrophy, and much more.

Like the squat, deadlift, and more complex compound movements, the lunge is prone to its own list of mistakes and adhering to the constant improvement of form will facilitate the most benefits possible.

What's the best lunge for beginners?

Generally, the forward lunge is the best lunge variation for beginners to learn. This is most common lunge movement pattern and will teach foundational mechanics for other exercises.

What muscles does the lunge work?

The lunge will work multiple muscles on the lower body and some of the main muscles including:

What are benefit of the lunge?

There are multiple that come with performing the lunge. A lot of the benefits like strength, hypertrophy, and power will come down to programming.

Other benefits outside of exercise adaptations include increased coordination, body awareness, and overall fitness capacity.