MET-Rx (pronounced “Met Rex”) is a supplement company based in Boca Raton, Florida, and they focus a little less on bodybuilding and more on football, often sponsoring well-known NFL athletes. Their product line emphasizes protein more than anything else and they sell a large variety of whey protein powders, protein bars, protein pancake mix, and more.

We’ve tried their creatine capsules but their Advanced Creatine Blast is a lot more complex. Let’s take a closer look.

There are 150 calories in one scoop, most of which come from 33 grams of sugar in the form of dextrose.

All the following blends are proprietary, so we don’t know the exact amount of each ingredient.

There are about 6 grams of creatine: creatine monohydrate, creatine ester phosphate, and creatine ethyl ester.

The product also contains artificial colors and flavors, though no artificial sweeteners — just the glucose.

Why the three kinds of creatine? The first ingredient, creatine monohydrate, is the most widely used and researched form of the supplement and has strong links to muscle power, endurance, and hypertrophy.

There haven’t been many studies on the other two kinds of creatine, though there was one double blind study that found creatine ethyl ester was less effective at increasing the creatine content in the muscles when compared to regular creatine monohydrate. So there’s no strong evidence that Performance Creatine should have mixed these three creatine forms.

The BCAAs have been linked to muscle retention, endurance, and focus, but they’re normally dosed at 5 to 7 grams. Here there are just 2 grams per scoop including the taurine (which is normally dosed at 1 gram) and the n-acetyl cysteine (which is usually 200-100 milligrams). But it’s possible that the BCAAs can increase the nitrogen in your body which might make it easier to build muscle. It’s hard to say how much of a difference that would make.

The arginine blend may help with endurance and improve time to fatigue, but it’s usually dosed at 3 to 6 grams, and there’s just one gram here. That said, I did like the n-acetyl cysteine, an antioxidant that may reduce cellular damage associated with exercise.

The other thing that’s worth emphasizing is that this has a lot of calories and sugar for a creatine product: 150 calories, mostly from dextrose. This might actually be appreciated by some athletes, since it’s possible that taking a big hit of carbs with creatine could increase its retention in the muscles.

It’s also made in a GMP facility. Good Manufacturing Practices-certified facilities need to abide by regulations outlined by the FDA to help ensure product purity. That said, MET-Rx hasn’t employed a third party tester like BSCG or Informed Choice to do their own testing for banned substances and impurities. If you’re an athlete who is very concerned about banned substances, that could be an issue.

You can pick up 3.17 pounds, or 30 servings, for $15.50. That’s 51 cents per serving or 8.3 cents per gram of creatine. That’s pretty expensive for creatine, which you can usually pick up at about 4 cents per gram, but you may find the price worth it given all the extra.

I tried the Fruit Punch flavor, which tasted like maraschino cherry. If you like cherry-flavored candy, you’ll like this. Although the scoop is very large, I found it wasn’t too strong mixed with 1.5 cups of water.

The different kinds of creatine are probably unnecessary (and probably less effective), and I think the BCAAs and the arginine are a bit underdosed. You do get a good 6 grams of creatine, it has carbs that might help absorption, the extra ingredients might have some effect on your workout, and the n-acetyl cysteine could be beneficial — but I think there might be other options on the market worth considering as well. 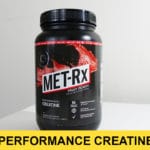