ON Whey Protein vs Dymatize-ISO 100 – Difference in Blends?

Optimum Nutrition’s Gold Standard is the most popular protein powder on Earth, while Dymatize’s ISO 100 is the most popular hydrolyzed whey product on Earth. Both companies make products that compete with the other’s — ON has a hydrolyzed whey, Dymatize has a whey blend — but these are the two products the companies are known for. If you’re walking through a supplement store and comparing the two companies, these are the products you’ll have in your hands.

The big difference is that Gold Standard is a blend of three kinds of whey whereas ISO 100 is primarily made with hydrolyzed whey. But there are a few other interesting things to note.

The market's most popular whey lives up to its reputation as a solid all-rounder with a huge variety of flavors to choose from. It includes 24 grams of protein in each round scoop and mixes well with milk or water.

What Are the Different Types of Whey?

There are two types of protein in milk: whey and casein. The two are separated in the cheesemaking process and while whey used to be considered a waste byproduct, it turns out it can be turned into high protein powder. There are three main kinds of whey.

Whey concentrate: this is the simplest, least processed, and cheapest whey. It also contains the most lactose, sugar, carbs, and fat. You can expect about 3 or 4 grams of each for every 20 grams of protein.

Whey isolate: A little pricier, this has been processed so as to remove most, and sometimes all of the fat and carbs.

Hydrolyzed whey: Also called whey hydrolysate or whey peptides, this is whey that has had acids or enzymes added to it so that it’s been broken down to the point that some consider it to be “pre digested.” This means it digests the fastest of the three types of whey; it’s also very low in carbs and fat and the most expensive.(1) 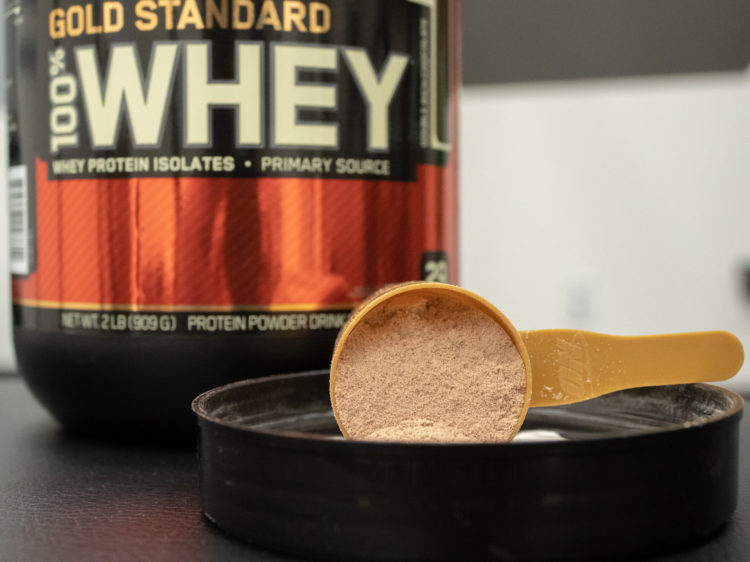 Both of these products have 120 calories per scoop, but the macros and micros are a little different. Here’s what you’ll get in Gold Standard.

Calcium: 8% of the recommended daily intake
Sodium: 5% of the RDI
Cholesterol: 10% of the RDI

[Check out our full review of Optimum Nutrition Gold Standard!]

Given it’s so much higher in hydrolyzed whey, it makes sense that ISO 100 has more protein and less fat and carbs than Gold Standard. The differences in calcium and sodium are negligible, though the significant difference in cholesterol may be a factor for some users. Given it’s lower in cholesterol, higher in protein, and a tiny bit higher in calcium, the edge goes to Dymatize. 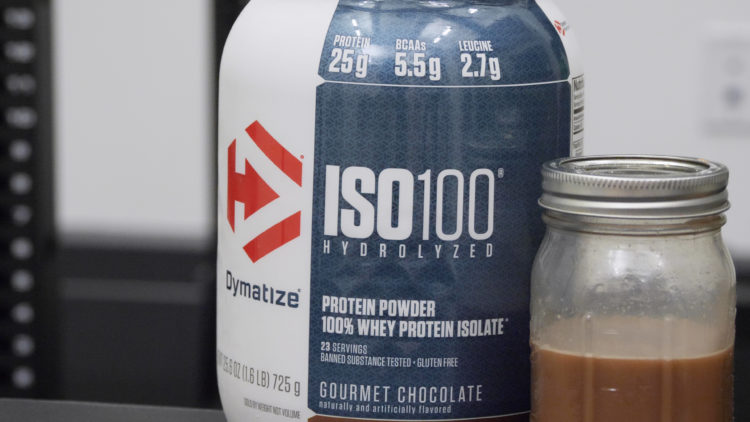 The biggest difference to note here is that Gold Standard is a blend of three types of whey: isolate, concentrate, and hydrolysate in that order.

The rest of the ingredients are soy lecithin (for mixability), natural and artificial flavors, the artificial sweetener acesulfame potassium, and the digestive enzymes Aminogen and lactase. These may help to reduce  reduce digestive issues like flatulence that can arise from consuming lactose.

“committed to an ongoing audit and swab testing in order to minimise cross contamination of WADA prohibited substances.”

Informed Sport is more rigorous, with the protein powder itself being tested every month for banned substances.

Other differences are that instead of acesulfame potassium, ISO 100 uses sucralose, also called Splenda, as a sweetener.Neither has a perfect track record, but acesulfame potassium has a little more debate surrounding it: some rodent studies found it may negatively affect blood sugar and memory, but these studies were conducted in the 1980s and used very large amounts of the sweetener.(3)(4)(5) Acesulfame potassium is approved by the FDA and considered safe, but it’s fair to say that it’s slightly more controversial than Splenda.

ISO 100 also doesn’t have any digestive enzymes, which may be the most interesting difference between the two besides the choice of protein. Some research has suggested that the enzymes may improve protein absorption and minimize indigestion.(6)(7)

It’s a little tricky to pick between the two, but the best argument is over whether you prefer the benefits of digestive enzymes or the benefits of hydrolyzed whey. Personally, I’m more impressed by the enzymes.

Both tubs cost about the same, but they contain a different amount of product: there’s two pounds in Gold Standard and 1.6 pounds in ISO 100. 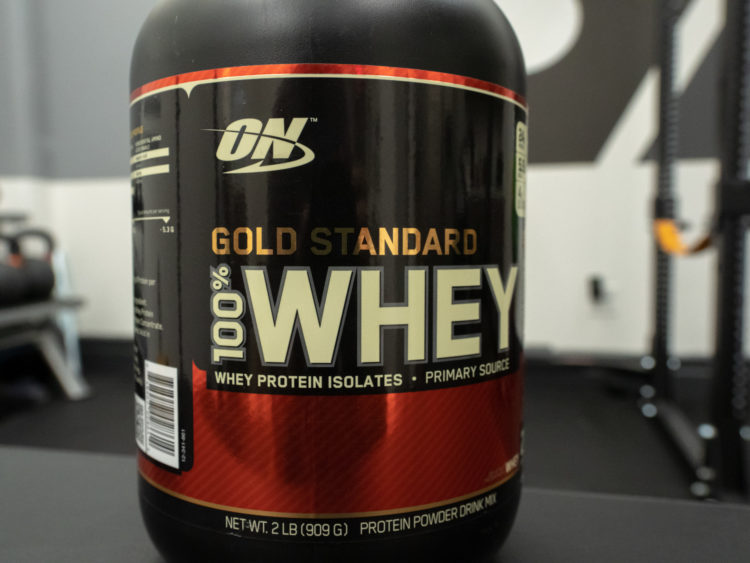 Double Rich Chocolate, despite the name, is relatively bland, and while it’s perfectly pleasant when mixed with milk — that’s adding cream and sugar, after all — it’s underwhelming when mixed with water. A scoop in water tastes, more or less, like a spoonful of cocoa in water.

ISO 100’s Gourmet Chocolate, on the other hand, is sweeter and tastes much better with water and with milk. It’s very rare for a protein powder to taste good with water, but if you handed me a pre-made shake of Dymatize, I’d believe that it had been mixed with milk.

If you’re mixing with milk, they’re both passable, with Gold Standard being a little more mellow. With water, there’s no contest. 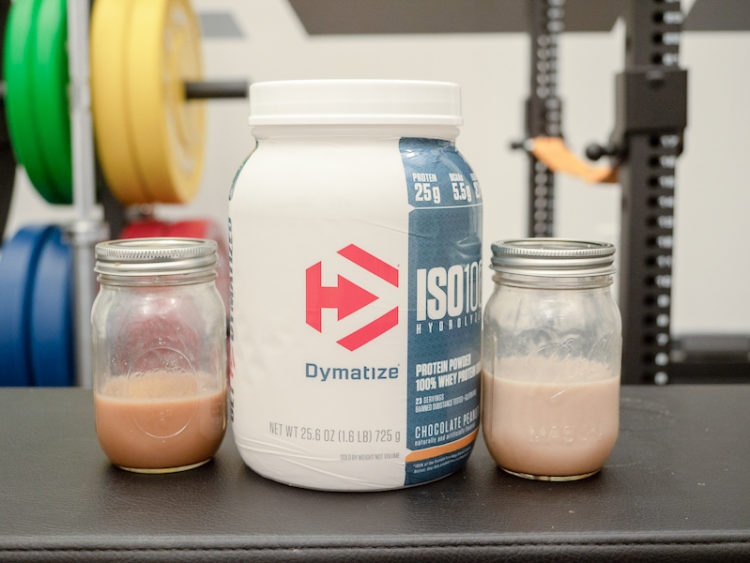 It’s tough to pick between these two, and it really depends on what you value in a protein powder.

Optimum Nutrition has digestive enzymes, more flavors to choose from, and it’s cheaper.

Dymatize tastes better with water, may absorb more quickly, it has a less controversial artificial sweetener, and due to the testing standards (and the potential benefits of hydrolyzed whey) it may be better suited for competitive athletes.

Personally, I always give the edge to whatever tastes good with water, which is Dymatize ISO 100. But if I were weighing which has the best ingredients, I’d probably give the edge to Optimum Nutrition because of the data supporting the use of digestive enzymes.