There’s no shortage of myths and conflicting information when it comes to pregnancy and exercise. It’s no wonder women often feel confused about what’s appropriate exercise-wise during pregnancy.

Many of the misconceptions about pregnancy and exercise lead women to be overly cautious during pregnancy (sometimes to the point of not exercising at all), and overly relaxed about post-pregnancy exercise, jumping back into intense exercise too quickly.

For years, pregnant women were advised to stick to nothing but walking, and maybe some gentle stretching or yoga. Luckily, as more research comes out about the benefits of moderate to vigorous exercise during pregnancy, the tide is starting to turn.

As you can see, exercise during pregnancy is very beneficial, and below I’m going to tackle three of the most common myths regarding strength training and pregnancy.

Listen as @jessiemundell coaches mamas through walking lunges! Walking lunges are a great exercise to increase lower body stability, because they mimic many activities we do in daily life (like walking, bending over, running after kids). They increase both stability and strength gains, which you can do even further by using dumbbells or barbells. #girlsgonestrong

1. You can’t start strength training for the first time during pregnancy.

The often-repeated advice that many women receive to “keep doing what you were doing before you got pregnant and avoid doing anything new,” is not always accurate or helpful.3

You absolutely can start strength training in pregnancy as long as you’re cleared by your doctor for exercise. In fact, ACOG goes so far as to recommend, “Women with uncomplicated pregnancies should be encouraged to engage in aerobic and strength conditioning exercises before, during, and after pregnancy.”4 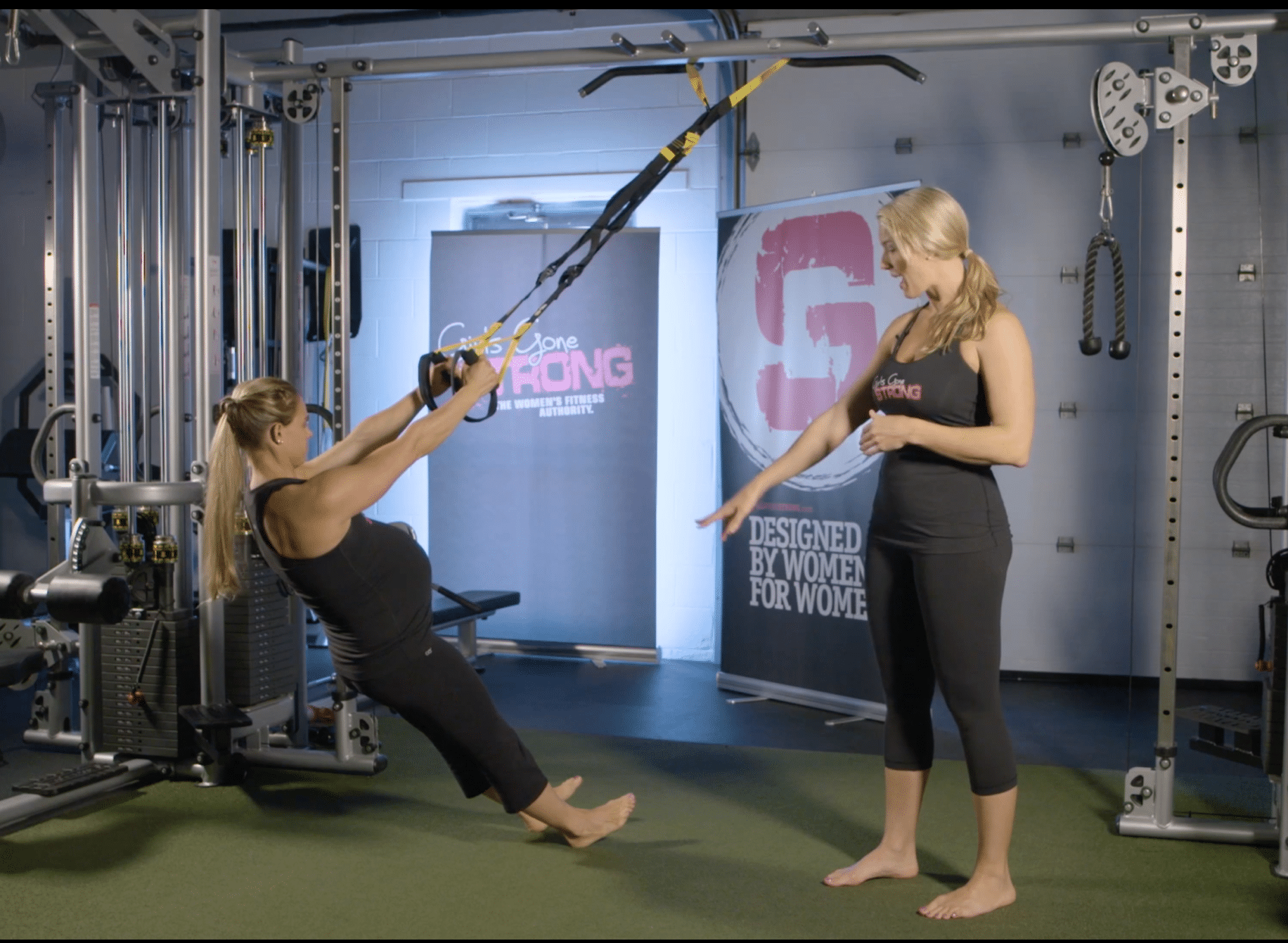 2. You can’t lie on your back after 16 weeks of pregnancy.

This “myth” is one of the most frequently cited, and with good reason, because it’s not as much of a myth as it is just plain unclear. According to the Girls Gone Strong Pre- & Postnatal Coaching Certification textbook:

“In the past, physicians have advised women to not to lie on their backs because the weight of the baby could press on, and block, the mother’s vena cava, the main vein that carries blood back to the heart from the lower body, and some recommendations say that after week 16, a woman should avoid lying flat on her back for long periods of time.4

However, ‘long periods of time’ is not clearly defined, and 2006 research published in BJOG, shows that uterine blood flow decreases when women lie on their backs, although during supine exercise, the decrease is about half of what it is during supine rest.5 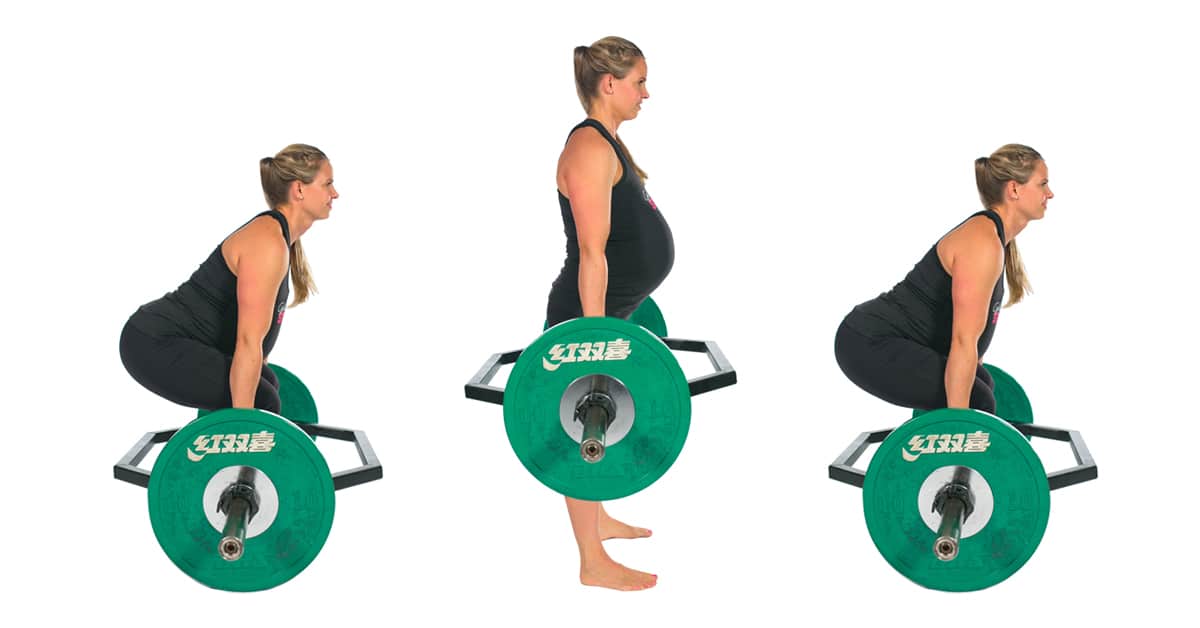 Current guidelines from Sports Medicine Australia suggest avoiding exercise in the supine position after 28 weeks.6 However, more recently, some research has stated that as long as a woman feels OK while lying on her back, and she doesn’t feel lightheaded or nauseated, tingling in the legs, general discomfort, and her breathing is not impaired during or after the bout of exercise or stretching, she should be fine to lie on her back.4

You can see that there are some differences depending on which guidelines you read. If you do perform supine exercises, or program them for a client, check in regularly to make sure none of the symptoms listed above appears.

These guidelines seem to change quite frequently as the science changes and we learn more, so be sure to check them regularly and stay informed. Most women will probably be fine, especially if they monitor how they feel, but if you want to be ultra safe, you can avoid the supine position after 24-28 weeks or work at a 15 percent incline.”

3. Leaking urine during exercise is normal when you’re pregnant.

Just how common is incontinence during pregnancy? Some research suggests that around 48 percent of pregnant women who have never given birth have signs of incontinence by week 308. This rate increases to around 67 percent for those who have given birth before.

For most women, this is stress urinary incontinence and results in a few drops of urine only once a week. For others, this is a significant symptom that affects quality of life. The good news is that you don’t have to live with urinary incontinence. There are pelvic health physiotherapists who specialize in helping women just like you find relief from incontinence.

And even if your incontinence is mild and doesn’t affect your life? It’s still important to get evaluated by a pelvic health physio. Incontinence is a sign that something in your core “system” is breaking down, and your pelvic floor happens to be where the breakdown is showing up. Being evaluated by a qualified physiotherapist can help reduce your risk of future pelvic floor dysfunction like pelvic pain, dyspareunia (i.e. pain with sex), and pelvic organ prolapse.

Whether you’re new to strength training during pregnancy or a seasoned veteran, keep these three myths in mind so you can have a safe, strong, happy, and healthy pregnancy and postpartum experience.