The Reebok Speed TR Flexweave debuted with Reebok’s latest product line of training shoes that feature their signature Flexweave material. Most strength athletes will recognize this material because it first grew in popularity with the Reebok CrossFit Nano 8 Flexweave cross-training shoe.

If you’re familiar with cross-training shoes, or you’re a fan of Reebok, then the Reebok Speed TR Flexweave will look eerily similar to its predecessor the Reebok Speed TR. In fact, when we started reviewing this pair of shoes, we thought they were exactly the same minus the Flexweave, but surprisingly (in a good way) we were wrong.

In my opinion, this is probably the best cross trainer if you’re looking for an all-around top performer that is also cost efficient.

The outer construction of the shoe is fully enclosed with Reebok’s Flexweave material. For those who haven’t experienced the Flexweave material, it’s a slightly tougher synthetic material that has a figure-8 design. Reebok states that this material is pressure mapped to accurately displace pressure throughout their training shoes.

In each of the Flexweave cross-training shoes I’ve tried there are two layers of material that create the shoe’s construction. On the inside, there’s a thin layer of mesh-like material that’s a bit softer and form fitting to the foot. Then on the outside, we have the Flexweave, which on this model was incredibly breathable.

In my opinion, out of every cross-training shoe I’ve tried this shoe had to have been the most breathable. When I ran, walked, or just wore them around the office I felt like my feet were consistently feeling the outside air. Honestly, and this might just be me being picky, but I don’t think these shoes would be idea for outdoor workouts in the colder months of the year (if you wear light socks).

Yes, they’re that breathable, which is a great thing for those who have feet that are prone to getting extremely hot and smelling easier. The picture above shoes the gap between the Flexweave and the inside layer of material towards the end of the mid-foot before the heel of the shoe start. As you can see, there’s a decent amount of space for air to come in.

Similar to the Reebok Speed TR, there are six eyelets that run up the mid-foot and each eyelet has a piece of leather-mesh material that extends out slightly, which adds to the mid-foot stability of the shoe. Personally, I’m a fan of these eyelets because they’re simple and don’t stretch out easily, as they have the extended portion of material.

Unlike the Speed TR, the tongue on this model is slightly beefier and has some additional padding under the Reebok symbol. For me, this was a subtle, but very welcomed difference. This shoe is incredibly light and breathable, so having a thicker and wider tongue to provide additional padding and security was a nice touch.

[Need a shoe designed for toes-to-bar? Check out the Reebok Speed Her TR!]

The heel on this model was similar to the Reebok Speed TR in terms of physical construction, but differed in terms of cut. For the Speed TR Flexweave, we still have the TPU layer that sits between the mid and outsole, which is a welcomed construction feature in my eyes, as it provides a great amount of stability without impacting heel strike.

Moving up from the TPU layer and mid/out-soles, we have the standard heel cup that was also present in the Speed TR model. I’m a fan of the heel cup in this shoe because it’s stable and subtle unlike the protruding plastic heel cup on the CrossFit Nano 8.

Another subtle change of this model that I’m still on the fence about is the lower cut heel construction. On the lateral and medial side of the Speed TR Flexweave the heel is cut a tad lower than the Speed TR, which is aimed to promote even more mobility.

I found the increased mobility to be true for lateral movements in this shoe, although, I’m worrisome for someone with poor ankle stability when using such a low cut. To be honest, I’m sure these shoes will be no issue for most, but it’s still something worth noting, as I’ve coached handfuls of athletes with poor ankle stability and know how it can impact performance and training. I would advise steering clear of basketball in these shoes.

The outsole is composed of a wave-like rubber material that’s designed to grip and propel one forward with running movements. Personally, I like how this outsole feels on multiple surfaces and didn’t think the material impacted stability by any means (there was no compression under squats, etc.).

Similar to the Speed TR, this model also has the metasplit design, which are the lines that go in-between the toes. Reebok uses this in their training shoes to promote a natural feeling shoe that moves seamlessly with the athlete. For me, I enjoy how they feel and how they grip the floor with jumps, sprints, and walking in general.

In respects to performance, I want to focus on two attributes that I really liked about these shoes and one area where I felt they fell a little short. I’ve worn the Reebok Speed TRs and the Nano 8 Flexweaves for months before this, so I have pretty good idea about the differences each model has to offer.

Below, I’ve included a brief table for a few of the movements I spent most of my time assessing these shoes with. They’re marketed to be extremely versatile, so I tried to keep that in mind throughout my work outs.

In all of my tests, there were two major performance perks that came along with these shoes. For starters, these shoes are incredibly light. Like I’m talking crazy light, there were occasions where I honestly forgot I had on shoes because they’re that light. The Flexweave design gives these shoes a mobile and lightweight feeling to them, which was welcomed for running and jumping. If you live near a beach, then these shoes would be an awesome pick for an outdoor sunny day workout.

The next perk with these shoes were their stability and outsole performance. For most, they won’t be maxing out in these shoes, so I think their outsole is a great fit to match the stress that will mostly likely be put on them. I squatted up to 315 lbs in them and thought they held up fine with compression, and their outsole gripped both rubber, concrete, and grass well, so HIIT workouts should be no issue in multiple settings.

My only concern, and I repeat, my only concern with this shoe model is the low-cut design for those with ankle stability issues when moving laterally. The heel is supportive and the cup is well-made, but the low-cut sides worry me for lateral movements and athletes with baby deer-like legs. The reality is that this can be accounted for by paying extra attention to form (not getting sloppy with bodyweight shifts laterally), but it’s still something I wanted to make clearly known about this model.

In respects to durability, I didn’t notice any glaring issues with this model. Granted, they’ve been out for a short duration, so my long-term thoughts are a speculation, but from what I can tell I think this model will last a fair amount of time. The Reebok CrossFit Nano 8 Flexweave have held up well for me, and the Speed TRs have done the same, so I imagine this shoe will perform well over time, as it’s more of a hybrid between the two.

For a pair of Reebok Speed TR Flexweave shoes you can expect to pay around $100.00. Compared to the Speed TRs, these shoes are slightly more expensive and will cost you an extra $20.00 for the updated design with the Flexweave. In my opinion, that’s still not an incredibly tough price tag to swallow when compared to other cross-training shoes on the market. Additionally, these shoes work a bit better for running compared to the Nano model, so if cross-training isn’t your only prerogative, then these are a good fit.

I mentioned a few of the differences between the models above, but to assist with keeping track of the subtle changes I noticed between the Speed TR Flexweave and Speed TR there’s a table embedded below. I didn’t list the Flexweave difference.

All in all, what started as a skeptical review turned out to be extremely pleasant. When we received the pair of Reebok Speed TR Flexweave shoes I thought, “There’s no way these are different than the Speed TRs,” but they surprised me in a very good way.

If you’re looking for a versatile and extremely light cross-training shoe, then this model could be a good bet. 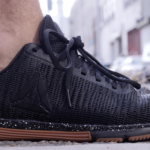