Should You Switch to Liquid Chalk?

Seeing as an awesome perk of my job is getting to drop into gyms around the world, lately I’ve noticed an uptick in gyms who are no longer using regular old block chalk. Up until recently, I’d only ever really seen liquid chalk as an emergency backup in my home gym. It had probably been in a cabinet for a few years and lost its potency, because it really didn’t work all that well.

When I dropped into Double Edge Fitness in Reno, NV, I discovered that they’d become a no-chalk gym…and the workout of the day was Angie. I have the sweaty palms of a 9th grader on prom night, so I wasn’t thrilled about having to bang out 100 pull-ups without my trusty block of magnesium carbonate. Furthermore, for anyone who has followed my writing, you probably know that I have this tactile perception hangup and am particularly picky about what I use on my hands.

Too bad, Brooke. Get used to it. You’re liquid chalk territory now!

The coach splurtted (Is that a word? It is now.) a blob of this science project-y goo on my hands, and I watched as it magically transformed from a liquid into a layer of actual chalk. This stuff clearly hadn’t been sitting in a cabinet for years because it actually did its job, at least through about 55 pull ups. At that point, I had to play a little fitness Frogger and get back to the front of the box for another round of liquid chalk. I didn’t love losing time to make the epic journey across the floor, mid-WOD, when my chalk is normally right there on the floor next to me, but my arms appreciated the rest.

The next day, we did a pretty great EMOM barbell complex with 2 power cleans, 1 squat clean, 1 front squat, and 1 power clean at ascending weight. I used one squirt at the start of the 6 minute long complex and another once the weight got heavy. I noticed that despite the fact that we were working out in the middle of the Nevada desert in the middle of summer, nobody else was making trips to the chalk bottle. These crazy people have actually gotten used to not relying on chalk. When they take a break in the middle of the WOD, they just walk around! They don’t chalk up out of cathartic habit! They don’t pretend that chalk makes them a better athlete! 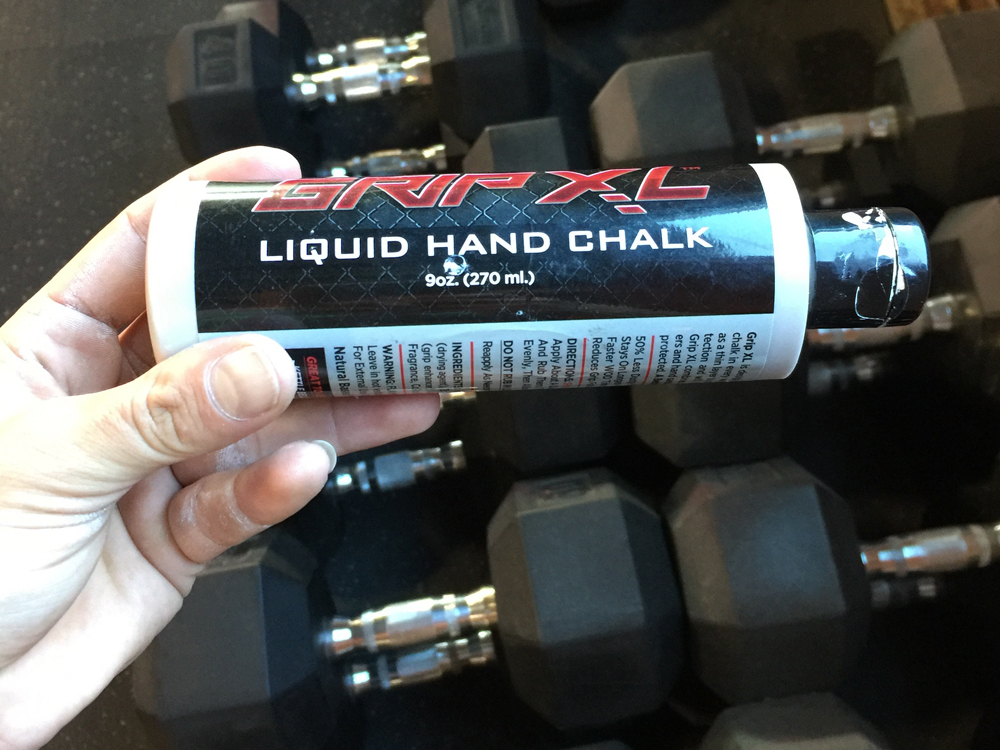 I definitely pretend that chalk makes me a better athlete. Specifically, I pretend that I’m chalking up for my Olympic Gold Medal winning uneven bar routine. It’s me vs. Nadia Comaneci, and Nadia is 54 years old now, so I’m going to win.

Don’t judge me on the mental tricks I use to get through a WOD, especially when that trick is no longer in the rotation thanks to liquid chalk.

I spoke to the coach about their decision to switch from block to bottles, and the answer is pretty simple: cleanliness. Block chalk is a bitch to clean off. A little sanitizing solution and a rag isn’t really going to cut it. Even though the liquid chalk itself is more expensive than the block form, most gyms probably make up the difference easily since their cleaning crew inevitably bills fewer hours. When you’re talking about a gym that’s 14,000 square feet, it’s a no brainer to get rid of the thing that causes the most cleaning headaches. 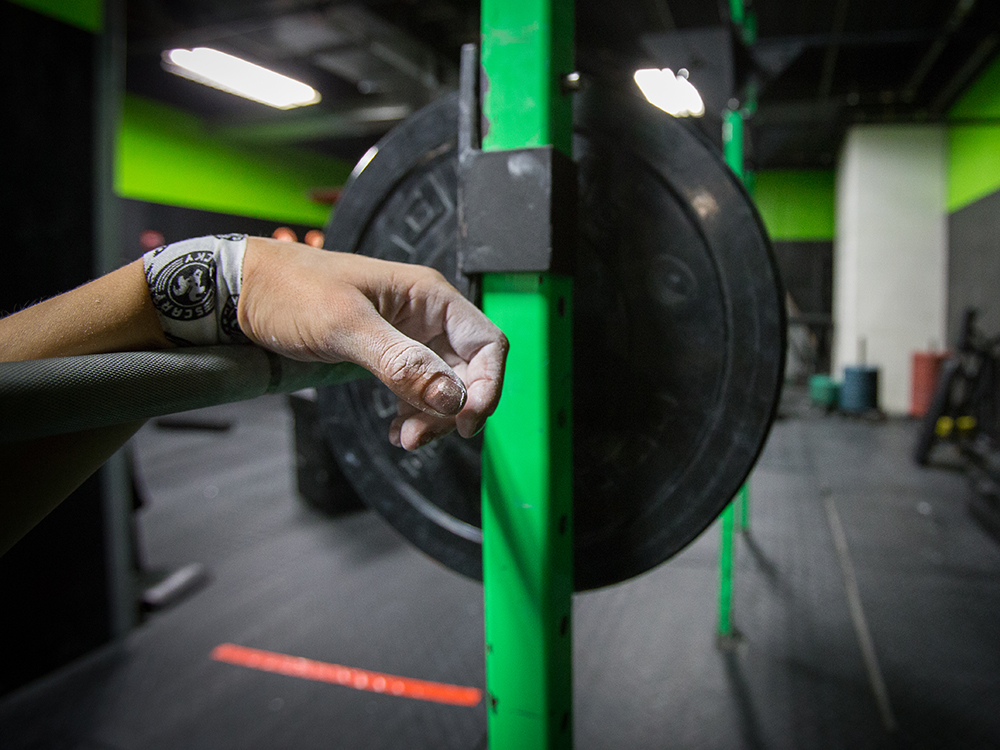 As far as safety, no one was peeling off the bars or losing their grip on 300lb cleans. The mental hurdle of working with less chalk is more notable than the physical hurdle. It’s going to take me a few workouts to get comfortable using it on high volume muscle ups, for example.

The beauty of liquid chalk is that you can always use regular chalk if necessary, like if you’re in the middle of the Open and don’t have the time to waste to wait for liquid chalk to dry. It’s also portable and won’t cover all of your clothes in a dusty residue. So, give it a shot! At the very least it will take you out of your comfort zone. Isn’t that the whole point of this fitness thing, anyway?