5 Ways to Effectively Train Through Injuries

Never miss a day of training with these strategies!

Any athlete that has worked to push their performance to the next level has experienced the occasional tweak that creates some soreness with exercise. But what do you do when a more significant injury occurs? You’ve worked hard to improve your fitness and if you want to maintain those hard earned gains you can’t just stop training.

The good news is that with some minor changes in your training we can usually keep athletes working on their fitness even when dealing with an injury. Here’s five tactics to employ to keep moving!

5 Ways to Train Around Injury

Author’s Note: None of the below should be considered medical advice. Always defer to a licensed medical professional, but use the below as a guideline for principles to discuss with your medical team.

One of the easiest ways to continue training while injured is to change the range of motion that you are working through. For many muscle and tendon injuries, when the muscle is loaded in a stretched position the injured tissue is more irritated. So avoiding stretched positions at times can be a great option to allow for increased loading without negative side effects.

For example, in an athlete that has strained his or her pec muscle limiting the range of motion with an exercise such as a floor press instead of a bench press can often be enough to allow an athlete to push heavy weight without slowing down the healing process.

Another example for someone with back pain pulling a barbell off the ground is to simply elevate the bar a few inches to decrease the amount of stretch placed on the posterior chain muscles.

Subtle changes in the variation of an exercise we perform can also frequently allow injured athletes to train. Different variations with altered grips, torso angles, knee positioning, etc., can change the amount of load placed on an injured joint or muscle.

In the squat, for example, the front squat typically has a more upright torso compared to a back squat. For many athletes with back pain this slight change in set up can allow for pain free training.

BACK VS FRONT SQUATS @chrisabeardsley⁠ .⁠ Many articles have been written about the differences between the back squat and front squat, and even now some coaches still regard them as producing very different training effects.⁠ .⁠ However, research shows that the similarities between the back squat and front squat are much, much greater than their differences.⁠ .⁠ #sandcresearch #strengthandconditioning #strengthtraining #strength #sportsscience #biomechanics #exercisescience #research #sciencetopractice #performance #science #infographic #infographics #hypertrophy #muscle #squat #backsquat #frontsquat⁠ Original photo taken by @resultsincgym

In individuals with shoulder pain small changes such as changing grip angle can have a huge impact. In the bench press or overhead press this is often as easy as switching to a neutral grip with a football bar or dumbbells rather than a barbell.

At times with more serious injuries, we may need to unload a tissue to avoid overstraining it. But exercise variations can still be used to maintain (or even improve) fitness in surrounding tissues.

One great example for people with low back pain that are not tolerating a loaded barbell squat variations well is to perform belt squats. This is where a weight is held on a belt around the hips that significantly lowers loading on the spine.

Another good example is how hip hinge movements can be loaded similarly by resisting hip extension with bands around the hips. As the individual becomes more tolerant of spinal loading they can add external resistance with barbells or dumbbells to challenge the hips and spine while decreasing the band resistance.

We all want to train hard and heavy. But at times we’re forced to decrease the load we are able to lift. If an injury forces us to go this route, then we can simply alter our training to have lighter weight and higher volume similar to what we might see in a hypertrophy block of training. As the injured tissues tolerate heavier loading we can lower the reps and increase the load.

In extreme circumstances we can’t train a joint or muscle at all. This often happens after an orthopedic surgery or in the very early stages of high grade muscle strains.

In this case, we are going to really push training the un-injured side’s muscle as much as possible because research has shown that this helps us maintain strength and muscle mass in the injured side. While many fear that doing this will create a larger gap in side-to-side strength or muscle mass — the opposite actually appears to be true —  at the end of the day we’ll decrease the amount of fitness we lose.

Once the healing process progresses we can begin using some of the above strategies to begin rebuilding fitness. 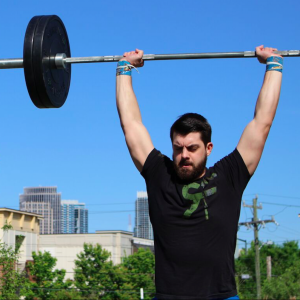 Dr. Zach Long is a physical therapist based in Charlotte, North Carolina, and runs an industry leading fitness website TheBarbellPhysio.com where he is a trusted resource to thousands of athletes, coaches, and health care professionals across the United States and beyond.

Zach earned his Doctorate in Physical Therapy from East Carolina University after spending several years working in strength and conditioning. He now combines his experience in sports rehabilitation with performance training to help athletes barbell athletes maximize their health and performance. Zach additionally teaches for the Institute of Clinical Excellence’s Clinical Management of the Fitness Athlete division, where he educates rehab practitioners on advanced assessment and treatment techniques specific to fitness athletes.