Upwild is a pretty new company that’s run by a brother-sister duo in Brooklyn, New York. Sold in bottles of twelve fluid ounces, the product labels itself as a “plant-powered protein shake” and delivers 16 grams of protein per serving that’s sourced from pea and sunflower.

But it’s not just a protein shake. It delivers a solid amount of fat, it’s all natural, it’s all organic, but what’s most remarkable is the huge emphasis on digestive health. Not only are there one billion probiotic bacteria per serving, there’s also inulin from Jerusalem artichoke, which I’ll discuss in more detail below.

Right now it comes in four varieties, all of which have a coconut milk base: Berry Bombe, Strawberry Shortcake, Mocha Melt, and Sunshine Swirl.

The macronutrients and micronutrients are relatively consistent across the four flavors. The calories range from 260 (for the Mocha Melt) to 310 (for Sunshine Swirl) and each bottle has roughly 13 grams of fat (10 grams saturated), 31 grams of carbs (3 grams of fiber, 19 grams of sugar), and exactly 16 grams of protein.

Everything is organic and all of the flavors have a base of coconut milk, are sweetened with date paste, contain protein from sunflower and pea, have inulin from Jerusalem artichoke, pack some chia seeds and maca, contain lactic acid, and include a dose of one billion CFUs of probiotic bacteria from the Bacillus coagulans family.

There’s some variety, but the only real differences worth noting are that Sunshine Swirl has orange and turmeric, Berry Bombe has blueberry and açai, Strawberry Shortcake has some strawberry, and Mocha Melt has coffee as its first ingredient (before the coconut milk) and some extra cacao as well.

As mentioned above, a big benefit here is digestive. There’s not a ton of fiber — maybe 2 or 3 grams each — but there’s 1 billion probiotic bacteria here which could have significant benefits for digestive health. Probiotics have been linked to a variety of benefits and while this particular strain is best known as a treatment for diarrhea, it’s also been associated with better immunity.

There’s also the inulin, which is a prebiotic. That means it acts as food for the probiotic bacteria, and prebiotics have also been linked to certain health benefits such as improved anxiety, although this research is in its infancy and we don’t know how many grams of inulin you get per serving. Still, it’s nice to see.

What about the other ingredients? The maca root has a lot of antioxidants and the chia is a decent source of fiber, but the lactic acid is a really interesting ingredient. Upwild says that it’s “the ultimate beverage for the health-conscious and active” and taking lactic acid may help with endurance and motivation, though that research is in its infancy as well.

The main benefits here are the probiotics. Are there vitamins and minerals? Well, this is the biggest problem. These are clearly nutritious beverages, but the nutrition panel is very incomplete. Indeed, there’s zero information about any vitamins (besides the helpful note that it has no Vitamin D), even though many of these beverages are full of oranges, berries, and other sources of Vitamin C.

The only other problem I can think of here is that all the drinks are coconut milk-based, which is totally fine if you like that taste, but if you don’t then you’re sort of out of luck.

On that note, these are pretty darn tasty drinks and while they do all have an undercurrent of coconut, I wasn’t dissatisfied with the variety. Berry Bombe and Strawberry Shortcake taste like their namesakes plus coconut, but Sunshine Swirl is almost curry like with the combination of coconut and turmeric. Of course there’s also orange in there so the flavor is sweet and not really savory, but coconut and turmeric may remind some consumers of Indian flavors.

The Mocha Melt was the most different and that’s because the first ingredient is coffee, then the coconut milk, plus there’s some cacao in there for a real mocha flavor. If you don’t love coconut or sweet beverages, Mocha Melt is the one for you.

This is a Brooklyn product and honestly, if you walk into a Brooklyn coffee shop and pick up an organic, fruity, vegan protein shake, it’ll probably cost you $5.99. It’s not a bad price, but people who aren’t from New York might be a little miffed to pay six bucks for twelve ounces.

These drinks are very tasty, great for digestion, all natural, all organic, and they have a good split of protein, fat, and calories. I would have really, really liked to have known what kind of vitamins they have. Beyond that complaint, there was nothing I didn’t like about this product. 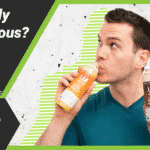