Struggling at lockout? Try these five methods to bust through your sticking point!

Getting stuck in the bench press can be caused by a wide variety of issues. It can be related to strength, mechanics, muscle imbalances, and more. The bench press is like a chain of commands and if there’s weak link in your chain, then that link will cause problems when you’re pushing your body’s limits.

A lot of articles focus on how to overcome getting stuck in the first half of the bench press, but for a significant number of athletes it’s the lockout — the last 20 to 30 percent of the lift — that causes failed lifts. In this article, we’ll discuss five methods to improve your bench press lockout. It’s important to note that the methods below will only be useful if your bench press mechanics are already dialed in. No amount of accessories and programming can fix poor form.

Why: Bands and chains add additional weight to the bar through the concentric of motion and towards the top of the movement or lockout. As you bring the barbell down to the chest the bands or chains decrease in tension (the band will lose stretch and the chains will bunch on the floor) then as you press, their tension increases again.

Replace your normal bench press working sets with accommodating resistance working sets. Generally, you’ll want to decrease your bench press intensity from 15-30% and this will vary based on strength levels, along with set and rep goals, and whether you’re using bands or chains.

It’s important to note that whichever form of accommodating resistance you opt for, you try to stick with it for the full block. Also, it’s a really good idea to be very mindful of setting up the bench press consistently every time with the bands or chains.

How to use bands and chains for accessory exercises!

Another great and under utilized accessory is the close-grip bench press with the addition of a 1/4 rep. A 1 1/4 rep entails a half rep, then a full rep before you can count the rep off during a set. The close-grip bench is awesome for targeting and overloading the triceps throughout the traditional bench press’s range of motion — meaning it’s an awesome movement for shifting focus in the bench press on the triceps.

Why: Lockout problems generally have to do with triceps losing steam towards the last range of motion needed to successfully complete a rep. The close-grip bench press already does a great job at targeting the triceps, however, when you add in a half-rep the toughness of this exercise increases.

Basically, the triceps now need to manage an eccentric load, a slight press, then a smaller and more precise eccentric load before completing a rep. Three benefits that come along with this bench press variation include:

How: Since you’re adding a half-rep, then you’ll likely have to decrease the intensity of your close-grip bench press. If you choose to keep the intensity the same, then your volume will need to be cut.

If you plan to use this exercise as a main accessory, then focus more on the intensity of the exercise, and if you’re using it more as a burnout for mechanical reinforcement, focus on volume with lighter loads.

For pure focus on lockout range of motion, few accessories can top the pin press. This exercise allows you to work through a very specific range of motion and to overload bench press lockouts safely.

Why: The pin press isolates the bench press’s range of motion to an exact degree with the use of safeties in a squat or bench press rack. Once you’ve dialed in where your sticking point is, then you can shift a rack’s safeties accordingly for your needs. Note, the pin press can be used in two ways:

On top of being precise with the range of motion, the pin press can also be easily overloaded. Since you’re moving the weight from a fixed position through a decreased range of motion, you can generally work with intensities that are near max and supra-maximal loaded.

How: The pin press can be used as a main compound or accessory depending on your goals and training block needs. For lifters focusing solely on their sticking point, employ the pin press as the main pressing compound for the day and focus on pushing near or supra-maximal loads. Generally, sets of 3-5 reps with 90+% intensity are a good starting point to acclimate to this movement and intensity (reps will decrease as load increases).

When using the pin press as an accessory, the load will vary greatly depending on the total sets and reps. One way to structure your sets and reps is by breaking your sticking point into two areas. If you’re failing at lockout due to strength, then use the pin press as an accessory with heavier intensities and less reps. For those failing due to mechanical issues (elbows flaring, etc.), then work with higher reps and moderate intensities to reinforce lockout mechanics.

Tempo is a powerful and underutilized tool for compound movements, especially when working through sticking points. Typically, tempo is used to increase time under tension in the eccentric movement pattern and for holds at the bottom of exercises. For this example, we’re going to focus on using tempo for the concentric portion of the bench press.

Why: Giving extra attention to the concentric portion in the bench press with tempo is great for providing additional insight into a sticking point problems. If you’re forced to pause or slow down with a weight just before lockout and lack success, then you’ll know right away which link is breaking down in your chain.

Common tempo-focused lockout problems and what they can mean:

How: The best way to utilize tempo with a concentric bench press focus is to bake in specific guidelines for the set. For example, as opposed to simply writing something like “3021” in your program, which traditionally indicates that there would be a 2-second concentric, specify that the “2” indicates a 2-second pause or tempo at a specific range of motion as a reminder and rule.

For example, in a program it could look as follows when written out:

Another great accessory for focusing on lockout problems is the floor press. This bench press accessory limits the full range of motion for the lift and can be great for overloading the top-end portion of the bench. It’s similar to the pin press, however, the floor press requires a slightly larger range of motion and mindfulness on the eccentric movement pattern.

Why: In the floor press, the elbows serve as the range of motion limiting factor. Once the elbows make contact with the floor, then the lifter will have to translate that eccentric load into a forceful concentric contraction.

The floor press is great for lockout problems because when the elbows make contact with the floor, it’s much more difficult to generate power due to lack of momentum. There’s no reliance on any stretch reflex for the floor press.

How: If you’re new to floor pressing, check out our guide below!

1.
Setup Underneath the Barbell

Start by positioning yourself on the floor underneath the barbell (eyes should be underneath). With the legs either straight or bent, be sure to place the feet, hips, and upper back on the floor, similar to that of a bench press.

Note, that this relationship with the floor is essential to the floor press. Often, individuals who struggle with this on a bench may find it easier to develop greater back tension in the floor press in the early learning phases.

With the body actively gripping the floor, firmly squeeze the barbell and pull the elbows down towards the torso, on a slight angle to ensure that the back muscles and posterior shoulders are being activated.

Be sure to pull the barbell to the base of the chest (just above the sternum) so that the elbows are roughly 45 degrees from the torso.

Once you have gently made contact with the back of the elbows to the floor, remain in tension and reverse the movement so that you go into the concentric pressing phase of the floor press.

Note, that lifters can pause at the bottom of the press (which I prefer) to help increase stability, control, and gain a deeper understanding on how to develop and maintain tension and strength throughout the full lift.

4.
Lock Out, Prep for Next Rep

Once you have returned to the top of the movement, repeat for the prescribed repetitions, rest, and repeat.

Make sure to not over protract at the top when completing a rep, as this could throw your positioning and base out of line.

1. Be Mindful of Programming

When programming to work around a lockout sticking point, stay objective and mindful about your exercise selection. This is where the concept of specificity comes in. For issues with lockout, strength sport athletes should aim to train with direct bench press variations that focus on this issue, while recreational lifters can often benefit with simply programming more triceps work.

Instead of trying to add in more accessories to an already busy program, focus on creating a full training block dedicated to working around a lockout sticking point. This is useful because it can help you dial in the movements and accessories you plan to use to tackle the problem at hand, AKA lockout issues. So as opposed to simply adding more volume to your current training program, alter a full block for working through sticking points. 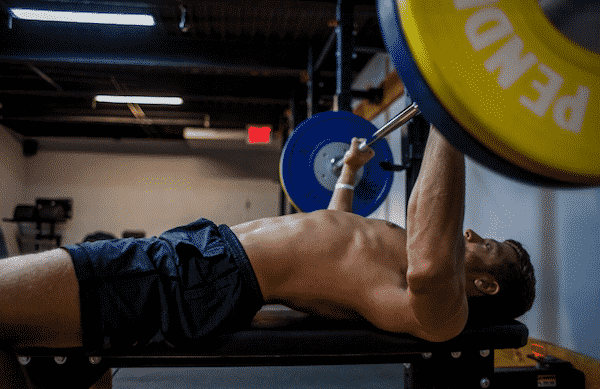 The bench press is one of the toughest movements to progress at times and sticking point can be incredibly frustrating for progress. If you find that your bench press sticking point is near lockout, then try some of the methods above in your current training program!