Perhaps the most famous powerlifting diet goes under the microscope.

This is the 1,000-calorie shake that Blaine Sumner drinks eight times a day.

And look, the man has the International Powerlifting Federation’s world records for the all-time heaviest equipped squat, bench press, and total. His heaviest squat at the IPF so far is 1,113 pounds and his heaviest bench is 915 pounds. Outside of the IPF, he’s benched 1,003 pounds.

He is legitimately one of the strongest human beings on Earth, and if you measure strength by powerlifting movements performed by people who are drug tested, well, Sumner’s got the heaviest total in the IPF, you could very well make the argument he’s one the strongest men in the world.

He’s famous for his strength, and he’s also famous for his very unusual diet. So as part of our never ending quest to unlock the secrets of strong people, we spoke to Sumner to learn everything about his diet: we’re covering chicken shakes, micronutrients, Gatorade, and supplements.

I also tried one of those shakes. It, uh, wasn’t great. Watch the taste test and the interview below.

Why (Oh Why) Drink Chicken Shakes?

“The main reason, which surprises people, is I don’t have the appetite I need to be nearly 400 pounds. I don’t like to eat, it’s a pain in the butt,” says Sumner. “I have a really busy job with long days, usually when I eat most of my meals, it takes so long to eat it and by the time I’m done it’s an hour before I have to eat again.”

So the shakes, he explains, allow him convenience and efficiency more than anything.

I can get in the same amount of macros and calories I need, and it takes ten seconds.

He’s tried making shakes with beef, salmon, and turkey, but he finds that chicken blends the best. Why not just use some nice, sweet, whey protein and add some berries?

“There have been times where if I didn’t have enough chicken prepped, I’ll substitute with whey, but it’s more a habit than anything,” he says. “I’ve done it and it works, so I’m sticking with my ways.”

Each shake provides about:

Here are the ingredients.

Add water until it blends.

“There’s nothing special or magical about it, you’ve just got to figure out what macros you need and divide that by however many shakes and add water,” he says. “It’s not that complicated.” 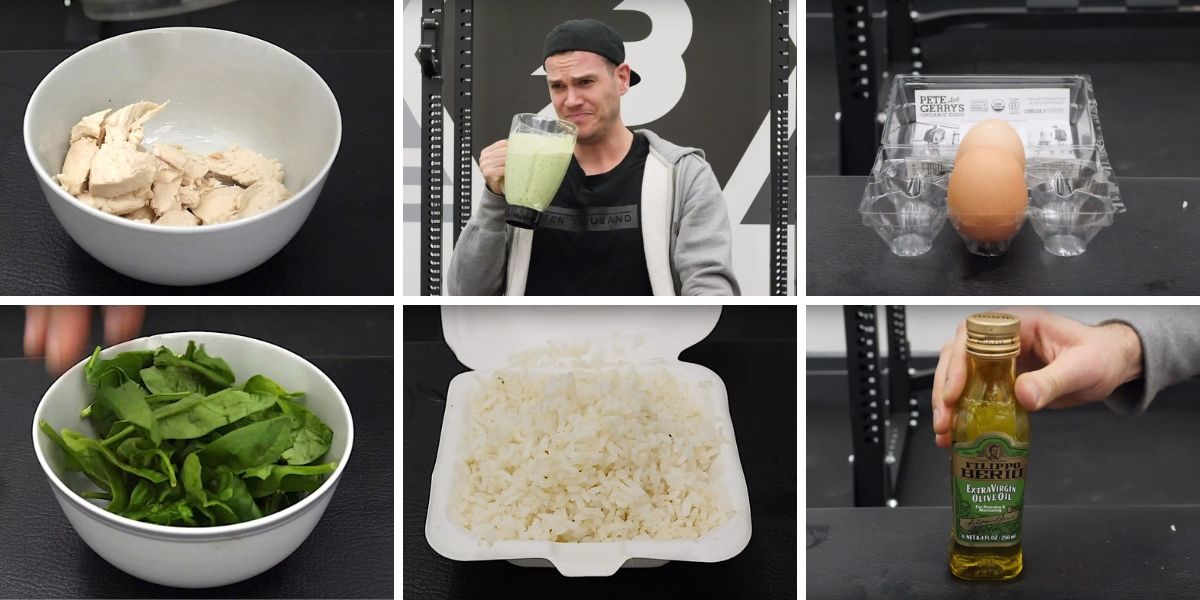 Now, as you can see in the video above, I can’t say I loved the taste of this shake. But to be fair, it is very nutritious. The chicken and rice of course give the requisite protein and carbs, but one shake also provides about,

Now, most of those come from the non-chicken ingredients so, again, we might prefer to swap that out for some whey and berries but hey, if the diet ain’t broke, don’t fix it — and Blaine Sumner’s performance pretty strongly suggests it isn’t broke.

At the end of a training day, between his shakes and a few bottles of peri-workout Gatorade, here’s what the total macros look like for this 400-ish-pound athlete:

These are pretty unusual macros for an elite athlete. Typically, they consume at least 2 or 3 grams of protein for every 1 gram of protein — 2018’s World’s Strongest Man Hafthor Bjornsson eats way more — and it’s also more protein than you usually see. Typically, athletes eat about 1 gram of protein per pound of bodyweight, but Sumner is on 1.6 grams.

But again, this works for him.

“I’ve experimented a little with (even) lower carbs, but sometimes when I’m in a higher volume training block I notice if I consume a lot of carbs, I get really bad cramps in my lower back,” he says. “So I’ve experimented around certain times with doing more protein and less carbs, but generally they stay equal.”

So what supplements does he take?

“Not a whole lot,” he answers. “I guess when I was in college and thought I had to take a hundred things a day, but really, the only supplement I take religiously is creatine. I used to take all those fish oils and multivitamins and then I just really quit. It costs money, and the more I read, the less it seemed it does stuff.”

Creatine is probably the most popular sports supplement after whey protein, and it definitely has the most evidence supporting it as a means to improve power output, muscular endurance, and muscle size.(1)(2)(3)(4)

The only other product he takes is Alpha Recovery from Promera Sports, which sponsors him. It contains branched chain amino acids, a small amount of electrolytes, some glutamine, and some anti-inflammatory ingredients.

[Related: The best foods and supplements for fighting inflammation.]

That’s what fuels one of the world’s strongest men. I would say don’t try this at home, but it seems pretty unlikely anyone else out there would be happy drinking 8,000 calories of chicken shakes every day — but if you are interested in switching up your diet or starting a new supplement regimen, make sure you talk to your doctor first.