"The Mountain"'s own nutrition coach gives the inside scoop on exactly what he eats.

Six feet, nine inches tall. Over four hundred pounds. The 2018 winner of the World’s Strongest Man™ (and, sure, The Mountain on HBO’s Game of Thrones) Hafthor Bjornsson literally carries hundreds of pounds of muscle on his frame and one of the most common questions we hear asked is What Does Thor Bjornsson Eat?

He actually used to be a very slim basketball player but to maintain his current level of muscle he eats over 8,000 calories per day. But for this unusually lean strongman, the foods he eats are chosen very carefully.

We spoke with his nutrition coach Stan Efferding — who, interestingly, also handles the nutrition for his fellow World’s Strongest Man winner Brian Shaw — to learn what nutrients are important for Bjornsson, which foods he avoids, and how he manages to cram so many calories into his day without suffering from bloating and digestive problems.

“When Hafthor came to me at 435 pounds and said he was getting fatter not stronger I already knew what I’d see,” Efferding told BarBend. “The blood tests saw he was high blood sugar, high blood pressure, had fatty liver disease, and metabolic syndrome.”

He brought Bjornsson’s weight down to 395 pounds, then brought him all the way up to a healthier 450 pounds using what he calls The Vertical Diet. Here’s what’s included.

For the Mountain’s diet, that means consuming somewhere in the area of 5,000 calories every day just from carbohydrates, but that doesn’t mean he’s eating huge bowls of pasta, brown rice, oatmeal, and other bodybuilder staples.

Hafthor Bjornsson’s calories are anywhere from 8,000 to 10,000 calories in a day, and if his digestion isn’t running as smoothly as possible, it’s easy to wind up bloated, gassy, and uncomfortable with that much food.

“Making that edible is kind of the hardest part,” says Efferding. “It’s the logistics of maintaining that kind of mass. How do you eat that much food and not suffer from diarrhea and gas?”

[Related: Our complete guide to the Vertical Diet] 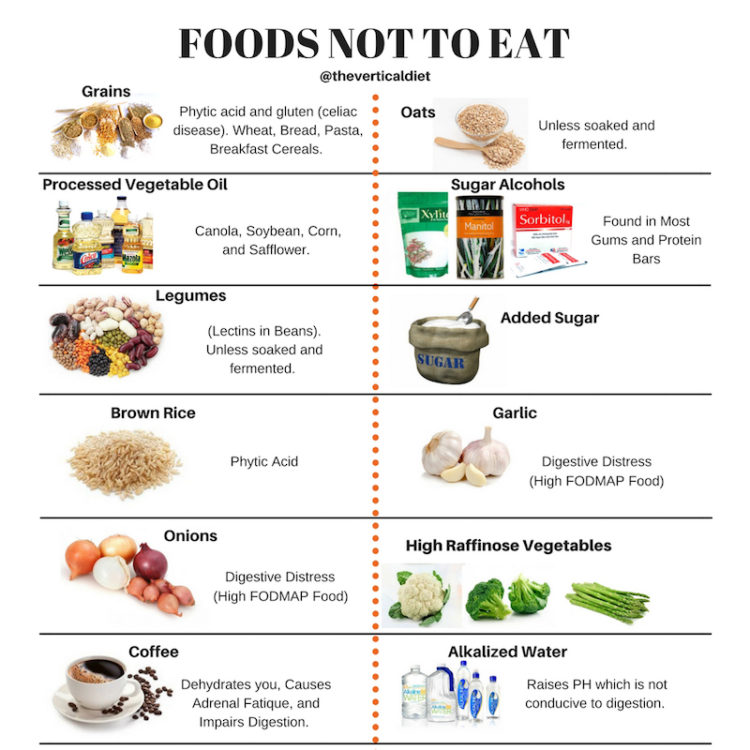 To that end, the diet eschews a lot of fibrous carbs, the sorts of filling foods that can be useful for weight loss but can make it harder to gain weight. The foods that are limited include

Exceptions are made if they’ve been sprouted or fermented (when it comes to bread, an example would be sourdough), but while it’s not uncommon for Bjornsson to have a small bowl of oatmeal here and there, the vast majority of his carbohydrates come from low-fiber, fast-digesting white rice.

Efferding also makes an effort to minimize high FODMAP vegetables. That stands for Fermentable Oligo-, Di-, Mono-saccharides And Polyols, types of carbohydrates that are resistant to digestion and are often avoided by people with irritable bowel syndrome and other digestive issues.(1)(2)(3) The basic idea is that since Bjornsson is eating so many calories, digestive hiccups that might go unnoticed when a healthy person is eating 2,000 calories can be magnified and cause issues at 8,000-plus calories, even if they haven’t been diagnosed with IBS. Some studies have found reducing FODMAPs to improve gut health and exercise-related indigestion.(4)(5)

So in addition to limiting grains and legumes, Bjornsson also avoids:

“High raffinose vegetables like broccoli and asparagus can impede or impair iodine uptake,” explains Efferding. (Raffinose is a type of sugar that’s resistant to digestion.) “That can be very important for athletes who are training hard and sweating a lot, because it can affect the thyroid function and metabolism. I have a very specific reason I’d prefer to use a low gas vegetable that’s cooked instead, such as spinach, cucumbers, squash, potatoes, even fruits.”

A classic Efferding meal is what he calls a “monster mash:” ground beef, white rice, and bone broth. Bjornsson recently shared a full day of eating and most of his meals followed a template of red meat, white rice, broth, spinach, bell peppers, and either coconut water or fruit juice.

Again, the focus is on keeping appetite high and slow digesting foods low.

“I put fruit in there and it stimulated the thyroid production, or at least conversion into a usable form, and it increases body temperature,” says Efferding. “I’m pretty specific with the foods I recommend because they provide so many positives. But I’m not trying to be a zealot about those foods or claim other foods are bad for you.”

What about Thor Bjornsson’s supplements? Efferding doesn’t rely on supplements all that much — if the Vertical Diet is followed, he says, there shouldn’t be many deficiencies — but there are a few micronutrients that he emphasizes with his clients.

Despite his big emphasis on digestive health, he doesn’t typically use probiotic bacteria or digestive enzymes as he feels there isn’t quite enough evidence. However, he does sometimes find himself recommending hydrochloric acid pills. Why?

NEW WORLD RECORD WITH THE WORLD RENOWNED HUSAFELLSTONE FOR 98.16 meters! Thanks to my sponsors @reignbodyfuel @sbdapparel @sodastream @legionath @roguefitness Coach @australianstrengthcoach nutrition coach @stanefferding and of course my wife, family, friends and all the workers that helped make The 2019 Iceland’s Strongest Man contest a success! Photo courtesy @runarhrodi

“Hydrochloric acid, usually paired with peptin, might be of benefit particularly among people who might be low acid,” he says. “That’s one of the first things I try to resolve for people taking antacids because without adequate acid, you won’t digest foods and absorb micronutrients, particularly minerals.”

He starts with one capsule at the beginning of a meal and might bring it up to two or three until the client gets a burning sensation. If that regimen is continued, they may get better at producing acid and digesting food, so he considers a temporary fix. Dextrose is sometimes added to rice as well, as it may stimulate the production of amylase, a digestive enzyme that helps us to break down carbohydrates.

For liver health, Efferding takes blood tests to detect liver enzymes like AST and ALT, and if they’re too high he might suggest Tudca (Tauroursodeoxycholic Acid) and N-Acetyl Cysteine, which he has found to be useful at reducing liver enzymes and increasing appetite.

But of course, the inclusion of blood tests and adding supplements to correct potential liver problems is very high level stuff that shouldn’t be attempted without the supervision of a doctor.

[Related: The athlete’s guide to magnesium]

It’s both pretty complicated and not all that complicated: red meat, white rice, and low FODMAP vegetables are the bulk of Thor Bjornsson’s diet.

Using that template and controlling calories helped Efferding take forty pounds off of Bjornsson’s frame, then add fifty pounds back onto it, and along with some highly individualized supplementation based on blood tests, this reduced indigestion and fixed his high blood sugar and high blood pressure.

It’s a fascinating and entirely unique approach to dieting that Efferding says is well suited to both high calorie and low calorie diets. But it’s somewhat radical, and it’s important to remember that you should speak with a physician before making any changes to your own diet.

USA Weightlifting Moves to Hawaii Ahead of 2020 Olympic Games. Here’s Why

2021 Rogue Invitational, Set for Oct. 29-31, Will Include Strongman Competition