Cellucor Alpha Amino Review — Why All the Extra Amino Acids?

Cellucor is a Texas-based supplement company that’s about 15 years old and probably best known for their pre-workouts, of which they have fourteen. The most popular is called C4, but Cellucor sells just about every product you can find in the fitness section of a supplement store, including several kinds of BCAAs.

We decided to try Alpha Amino, their more “advanced” BCAA blend that has a lot of extra ingredients than just the three core BCAAs. So what do they do?

The label doesn’t state how many calories are in a serving, but we do know there are 5 grams of BCAAs with a 2:1:1 ratio of leucine, isoleucine, and valine.

Then there are 3.75 grams of extra amino acids. There are actually eleven of them: l-glutamine, taurine, l-alanine, l-citrulline, l-arginine, l-lysine HCI, l-phenylalanine, l-threonine, l-methionine, l-tyrosine, and histidine. There’s no information about how much of each amino acid is included.

There are also about 200mg of electrolytes, about 70mg each of phosphorus and potassium and smaller amounts of magnesium and sodium.

[Check out our best BCAA roundup]

Then there’s the “Alpha Amino Hydration Blend.” It contains betaine anhydrous, coconut water powder, and some electrolytes. I’ll discuss these ingredients in the next section.

The idea with this supplement is that in addition to the 2:1:1 ratio of leucine, isoleucine and valine — which are meant to preserve and build muscle and improve endurance, focus, and fat loss — there are 11 other amino acids.

In this way, it’s a little similar to Optimum Nutrition’s Amino Energy and it actually contains the same amino acids. In both products, their inclusion is a little confusing. What are these amino acids here for? Histidine is usually supplemented for patients with immune disease, lysine HCI is usually prescribed to prevent cold sores. There’s certainly nothing wrong with them and they have plenty of other functions in the body, but there’s no information out there as to why all these extra amino acids make for an effective workout supplement.

Some of the other ingredients are confusing as well. Betaine anhydrous, for instance, is a chemical you can find in beets and some other plants that may reduce levels of homocysteine in the body, which is why it’s sometimes given to patients with heart problems. Some studies have found it may slightly improve power output, but it’s not really scientific consensus and few experts would say it’s a great addition to a workout supplement, especially since it’s usually prescribed in doses that are more than twice what you find in Alpha Amino.

There are some ingredients that are generally recognized as useful, like the BCAAs themselves and the electrolytes, which may boost endurance and help muscles contract in addition to attenuating dehydration. But a lot of the ingredients seems unnecessary.

Alpha Amino’s Fruit Punch flavor is pretty refreshing. Like most BCAAs with this flavor, it tastes like cherry and watermelon jolly ranchers, but the good thing is that it’s not too strong — one scoop in 1.5 cups of water was fine.

Cellucor’s Alpha Amino provides 5 grams of branch chain amino acids per serving and some electrolytes, too. I’m not convinced that the other ingredients are necessary, and since there are a lot of BCAA supplements that provide BCAAs and electrolytes at a cheaper price, I’d probably recommend you pick up something like Xtend instead. 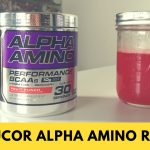