Deficit Deadlifts | How-To, Muscles Worked, and Who Should Use Them

An advanced deadlift variation that can pay big dividends when used strategically!

In this article, we’re going to cover multiple topics to equip you with the knowledge needed to perform deficit deadlifts with intent and strategy. Some topics that will be covered include:

For the visual learners, check out our video below that discusses the above topics in detail!

What Are Deficit Deadlifts?

Deficit deadlifts are any deadlift that is performed off an elevated surface resulting in an increased range of motion. The deficit is supposed to disadvantage normal starting mechanics to create carryover to off the floor strength. Conventional deadlifts can be performed from a deficit, along with sumo deadlifts.

How To Deficit Deadlift

Check out the quick guide below for how to perform technically proficient deadlifts.

Traditionally, deficit deadlifts will be performed off a surface that’s anywhere from 2-4 inches tall. Some popular objects to stand on include:

Get set as you normally would for your traditional deadlift and work on limiting setup changes. For example, the hips should not be moving and altering their starting position to a large degree to accommodate for a deficit deadlift. There will be some subtle changes in setup positioning, but it shouldn’t alter mechanics to a large degree.

Ensure you’re bracing well and pull the bar tight to the body to avoid the hips shooting up too quickly since they’ll likely be positioned higher than normal.

3. Execute As Normal and Hyper-Focus

Perform a similar concentric (lifting) pattern that you would for the traditional deadlift and do the same for the eccentric (lowering) portion. Focus heavily on controlling the barbell and maintaining a strong hip hinge to build the posterior chain and strengthen lifting postures until the barbell makes contact with the ground. 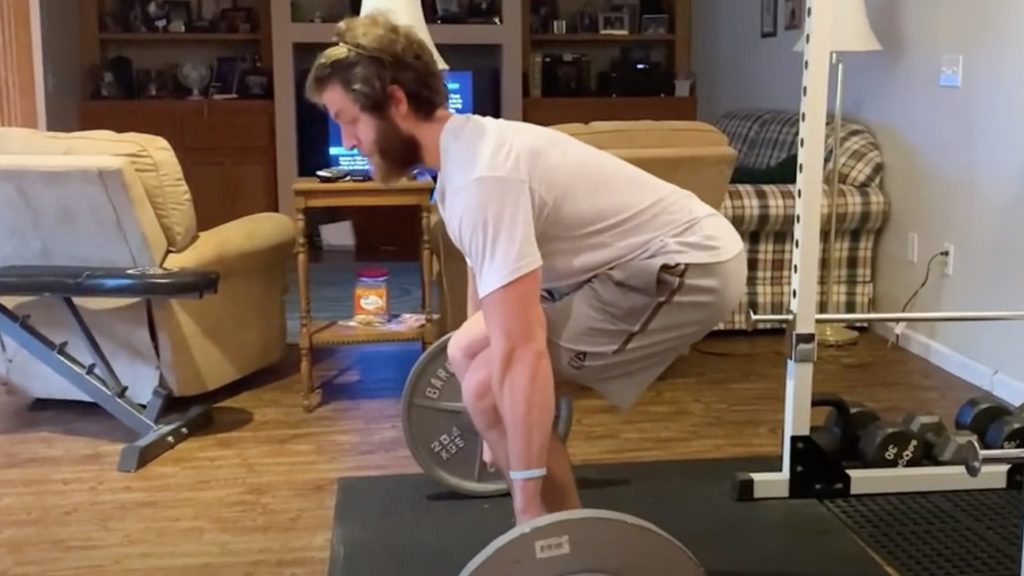 [Related: Improve your deadlift and hip hinge with our in-depth RDL guide.]

There are multiple deficit deadlift benefits and each provides insight into how to use and program this movement accordingly.

1. Improved Strength Off the Floor

Pulling strength off the floor is huge for successful heavy deadlifts. The first 30% of the deadlift is often the hardest, so by disadvantaging this range of motion with deficit deadlifts you can create higher strength carryover for this specific range of motion.

Some useful cues to keep in mind when using deficit deadlifts and trying to improve can be seen below:

[Read this: Establishing reps and weight to safely use for deficit deadlifts!]

By increasing the time under tension during the starting position of the deadlift, you can potentially work on improving lifting postures needed to successfully complete this movement pattern due to the specificity of its demands.

For example, maintaining a strong starting hip position can sometimes be a struggle for some lifters, so by focusing on this specific range of motion cueing and body awareness can be worked on.

This is demanding deadlift variation, so it only makes sense that the posterior chain is going to receive a ton of work performing this exercise. The glutes, hamstrings, erector spinae, and back musculature will all be strengthened with deficit deadlifts.

Who Should Perform Deficit Deadlifts

As mentioned in the intro of this article, deficit deadlifts are not for everyone. If you don’t have a coach, then it can be a little more complicated when knowing how to program deficit deadlifts.

To assist you on your pulling journey, we’ve created a table below to help you navigate the question of if deficit deadlifts are worth it. If you answer “no” to any of these questions, then it might be worth exploring other deadlift variations to use in your program.

Again though, the above is individual so if you did answer no, but still want to perform them, then go ahead! We just want you to simply be strategic and safe when adding new exercises into your training plan.

Carryover to Other Movements

If the deficit deadlift is exercise that is routinely employed in your programming, then you can expect to have some direct and indirect carryover to other movements. The exercises that will see the most benefit and carryover from deficit deadlifts are other deadlift variations and movements that require a strong hip hinge.

Other movements that require control over weight can also see an increase, as deficit deadlifts improve the skills of timing and patience off the floor.

Should everyone perform deficit deadlifts?

Not necessarily. For example, beginners will benefit with simply performing quality traditional deadlift reps and building foundational strength. In addition, lifters should have a reason for employing their use and not just because they look cool.

Generally speaking, a deficit will vary between 2-4ish inches and this will be based on what’s stood upon. Some popular options include:

What muscles does the deficit deadlift work?

The deficit deadlift will work all of the same muscles as the traditional deadlift. For instance, the primary movers will still be the glutes and hamstrings, while the erector spinae, calves, and upper back serve as supporting muscles.

The deficit deadlift can be an incredibly training tool for improving deadlift and overall strength. However, it’s a slightly more advanced exercise, so its use should have rationale and intent behind it. If you’re unsure if the deficit deadlift is right for you, then we’d recommend seeking out a coach for in-person feedback!