Eddie Hall is the strongest human being on the face of the planet. Even before he won the 2017 World’s Strongest Man he had made a variety of historic firsts in strength sports including the heaviest long bar strongman deadlift (465 kilograms), the heaviest axle press (216 kilograms), he’s the first person to win Britain’s Strongest Man four consecutive times, and of course, he is the first and only person to have ever deadlifted 500 kilograms.

The man’s a beast — he has “The Beast” tattooed across his biceps — and while he suggested he was retiring from the World’s Strongest Man competition, we may see him return to strongman sooner than we thought. To promote his brand new autobiography Strongman: My Story,  BarBend spoke with Hall in a wide-ranging interview on everything from acting ambitions, swimming for strongman, the downsides of fame, and a possible goal of breaking his deadlift record. 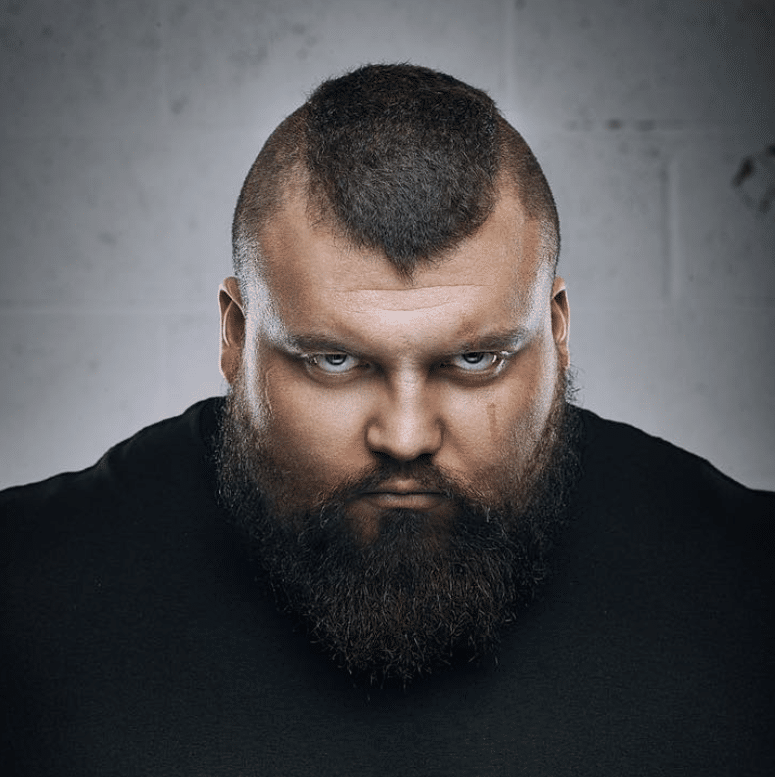 BarBend: First question: If you had to be stuck on a desert island with one strongman, who would it be?

Hall: It’d have to be Brian Shaw. Basically, he’s the most intelligent strongman I’ve ever met. And he’d be the most useful in building a raft and getting food and generally surviving. Plus, he’s good fun. (laughs)

So, you’ve retired from World’s Strongest Man, but you’re clearly still training hard. You recently broke the partial deadlift world record and last week you benched almost 500 pounds for 10 reps. What do you plan on doing next, are you training for anything in particular?

Well here it is…. The impossible 500kg! Massive thanks to protein Dynamix for supplying my body with all I needed to make this happen. Protein, creatine, bcaa's,' you'll not find better elsewhere. Www.proteindynamix.com ^Use code THEBEAST for 30% off^ Sign up first, takes two mins. Big Love The Beast #strongman #proteindynamix #500kg #halfondeadlift

I read that after you made your 500-kilogram deadlift world record you went blind for a few days, is that true?

Yes. Have you heard of arc blindness?

It’s when welders look directly at the welding light and get a blind circle in that area of their vision. I basically got that for a few days, I had a really bad concussion, memory loss, bleeding out of every hole on the body. So yeah, it was a really risky, dangerous lift and the health consequences weren’t the best, but it was all worth it.

And you want to go through all that again?

Hey, man, if the money’s right and the conditions are right.

While we’re discussing training, you’ve said that you like to swim to build your conditioning for strongman, which is a relatively unusual method. Do you have any tips for strength athletes on how to incorporate swimming into their regimen?

Yeah, I used to be a national champion swimmer and I found it helped massively with lung capacity, heart function, and more than anything the mobility, because it helps the ligaments and capillaries and everything keep moving, so to speak. So I do an hour of swimming once a week: a minute on and a minute off. I do two laps as fast as I can, have a minute rest, and repeat that for an hour. It’s great cardio, great for mobility, and great for lung capacity.

You said recently that you weren’t so interested in pursuing Olympic weightlifting, but do you have any aspirations to compete in other strength sports like powerlifting or CrossFit?

I’ve thought very broadly and openly about that. I just feel if I were to get into Olympic weightlifting it’d be like starting all over again. I couldn’t put my body or my family through all that pressure again.

I could easily jump into powerlifting, but I just don’t see it as a meet sport — it’s so broad. There are so many different federations, rules, and regulations. Which federation do I go to to get the ultimate title? And if you win that one, then another federation would say you don’t have ours so you’re not the true champion. It’s so broad.

What about outside of strength sports — you were in the most recent  Transformers movie, do you have any acting ambitions?

I’ve done a few little cameos, I’ve had loads and loads of film offers but nothing’s been of any big interest as yet. It’s all been shit. I don’t want to just go into background in films, that’s not me. I’d have a role or I wouldn’t be in it at all. I’m waiting for that big offer to come along, and if it doesn’t then I’m not that bothered, I’ve got other things on my mind.

What kind of role would you want?

Playing the bad guy in any movie, really. It’s a no brainer, I’m a huge, six-foot-three, thirty-stone man, I’ve got scars on my face, I look pretty gnarly. Just any bad guy role would suit me down to my feet. 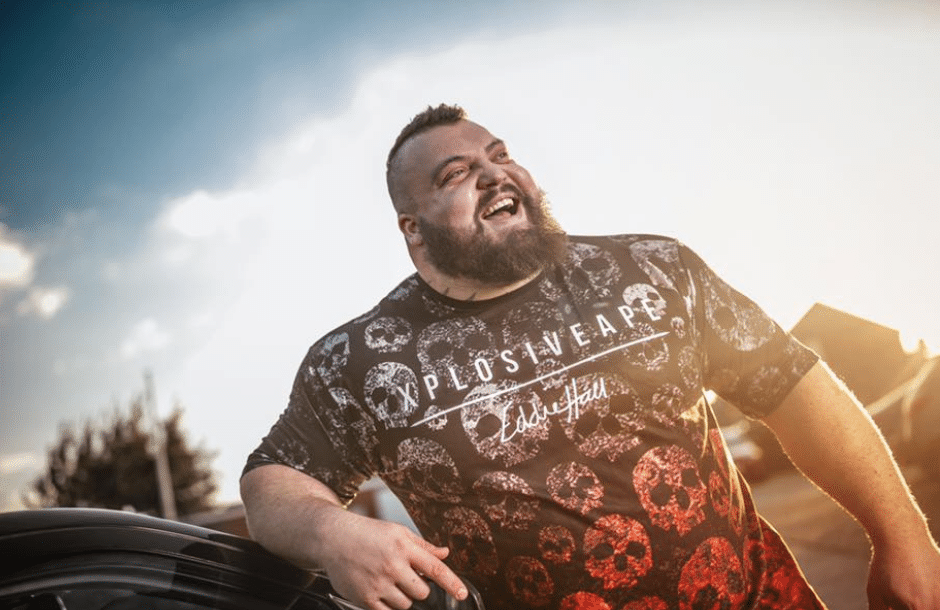 Strongman is a pretty niche sport, but you’ve achieved a level of fame that’s very rare in strength sports. How has your growing celebrity impacted your life?

I live in the middle of a big estate and everyone knows where I live. I have to have an electric fence because people knock on my house all day, every day. It’s annoying, but I appreciate it because at the end of the day I’ve got a great fanbase and I appreciate it and I really appreciate the fans. 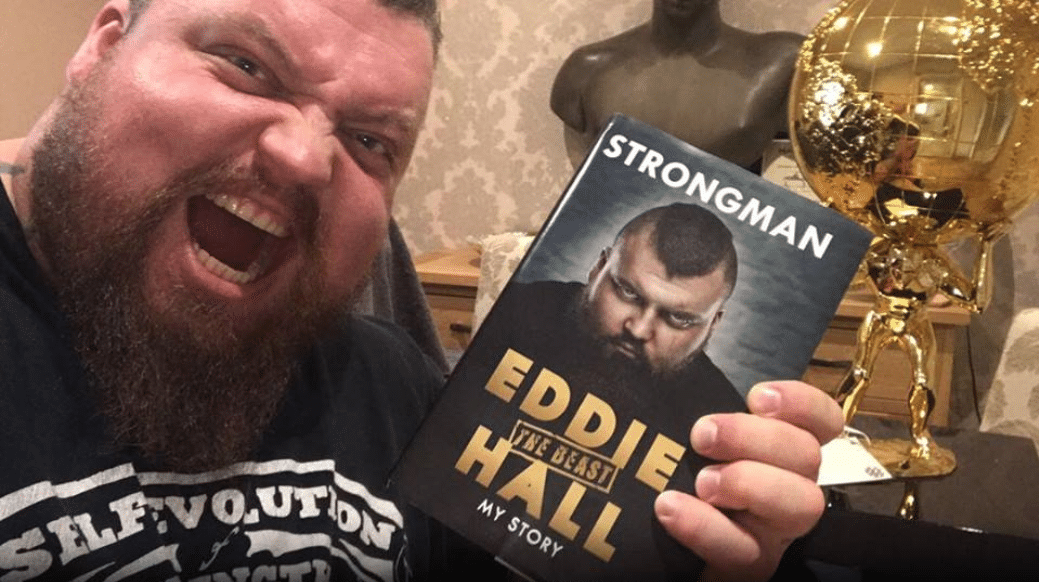 Your new book is called Strongman: My Story. What are some things people will learn about you in the book that you haven’t revealed elsewhere?

The book goes from childhood right up to when I won the World’s Strongest Man. There are stories of my childhood and high school, especially going through depression and getting into strongman and the hardships related to that that are very close to the heart. Things I couldn’t talk about on camera but I could write down. So there are some great stories you’ll hear.

Looking forward to it. Thanks for your time, Eddie!

Featured image via Eddie Hall – The Beast on Facebook.