Op-Ed: Why You (Yes, You) Should Be Doing Olympic Weightlifting

We think it’s pretty safe to say that by now, we all know strength training is good for you. Even mainstream gymgoers will typically agree that while, yes, cardio can be a great way to improve your health, ignoring full-body resistance training puts you at a greater risk of back pain, osteoporosis, arthritis, a ton of metabolic diseases, and even depression — particularly as we age.

What I don’t understand is why people haven’t taken this to its logical conclusion: the sport that undoubtedly gives the most bang for your buck in terms of improving strength, speed, power, cardiovascular health, balance, and function. I’m talking about the insanely healthy sport of Olympic weightlifting. 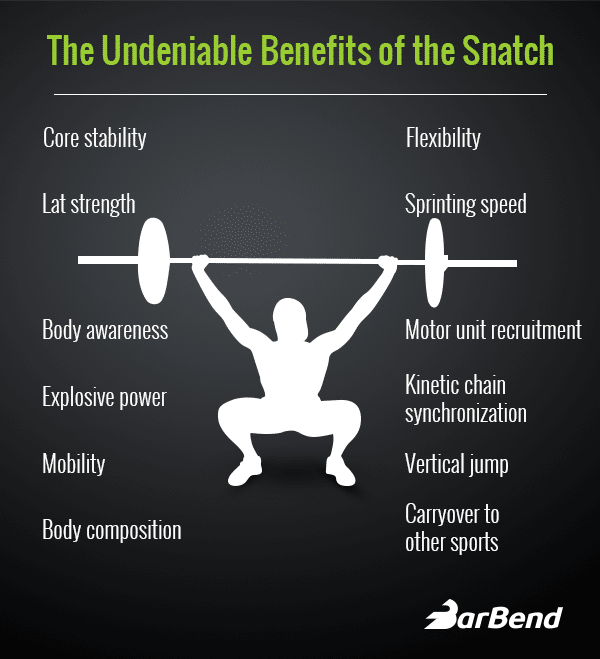 “I Have No Idea What You’re Talking About.”

Although the movements are over in a couple of seconds, the training required to hit challenging weights with good form needs you to use just about every aspect of your fitness — there are simply no other exercises that deliver so many benefits at once.

“We are all crunched for time,” says Mike Gattone, the Assistant Technical Director at USA Weightlifting, the country’s official weightlifting governing body. “When you do a big multi-joint movement like Olympic lifting or associated movements you’re squatting, you’re deadlifting, you’re hip hinging, in a sense you’re rowing, you get good upper back stability work, overhead strength, shoulder stability, pressing movement. You hit a lot of functional movement with very few exercises.”

Each of the exercises requires a pull from the ground, which lights up the core and the entire posterior chain (hamstrings to upper back), but the quads are worked in the squat while the shoulders and arms are used to whip the bar overhead.

Studies have also suggested that a few months of “weightlifting” (that word refers to the sport of Olympic weightlifting, and don’t let anyone use it differently) improves resting heart rate, blood pressure, and VO2 max, areas of health that are typically targeted with “cardio” workouts. Have your cake and eat it, too.

But besides the potential time-saving aspect, weightlifting requires tremendous explosiveness, speed, mobility, and balance. That means it transfers to just about any sport — weightlifters have some of the highest vertical jumps of any athlete — and it contributes to fitness and longevity in ways that many other exercises don’t.

“If you’re laying on a machine doing a leg press, you’re building some muscle and getting some bone density,” says Gattone. “But you’re not getting that kinesthetic development you get when you have to learn how to punch against the floor, make a bar and your center of gravity go up together, to contract some muscles and relax others at the same time. Those are really important for human function.”

As we age we also lose fast-twitch muscle fibers, which are important for quick reactions to the unexpected — say, slipping and falling, the leading cause of fatal and non-fatal injuries in the elderly. That’s why speed is an underrated component of fitness and it’s why the explosive nature of weightlifting is an excellent way to keep you fast and strong into old age.

Of course, it’s also responsible for some of the most bangin’ bods in the Olympics, and hypertrophy, or bodybuilding exercises, are strongly encouraged among weightlifters to develop new muscle, improve symmetry, and increase neuromuscular stimulation of tissue. That means the aesthetic results alone will keep you coming back for more.

“Can Anyone Do the Exercises?”

Snatches and clean & jerks require strength, but above all they require excellent mobility to get into the positions and maintain correct form. That’s why the sport is so great for your posture, joints, and injury prevention. Building toward that level of mobility is one of the reasons hitting your first full snatch and gradually increasing the weight is so satisfying: it takes work to get there.

But training is far more than just the two main lifts, and there’s always a more basic version of any exercise as you improve your mobility. Accessory movements are varied but they include plenty of your familiar favorites like squats, deadlifts, pull-ups, and planks, along with more explosive movements.

[Weightlifter and YouTube personality Clarence Kennedy breaks down all of the main weightlifting movements in this handy guide.]

“I understand that not everyone walking down the street can do a full snatch or a full clean, so I’m also talking about aspects of the lifts. It could even be a good clean pull or clean pull from the knees, depending on what the person’s hip mobility is like,” says Gattone, describing versions of the “clean” (the pull of the barbell from floor to shoulders) with smaller ranges of motion. “If a lot more people could just do a squat with a barbell overhead, man, what it would do it for posture, hip health, and overhead stability.”

In short, there are levels of expertise like there are in any skill, and as is the case in martial arts and most other sports, there’s no shame in being novice or intermediate: you’re always committed to getting better, even at the expert level. And “better” is something you can actually measure.

“Everything is in your control, because it’s an individual sport and you can clearly see your progress as you add kilos,” says Phil Andrews, CEO of USA Weightlifting. “You don’t really know that in a team sport like hockey, when you’re relying on other people. It’s ‘can you lift it or can’t you?’”

While it’s a great way to compete against yourself, competing against others is always an option if you so choose. It’s an unfortunate misconception that this is only a sport for gigantic people — weightlifters are split up by weight category, which go as light as 48kg (106lb) for women and 56kg (123lb) for men. And don’t be intimidated by the world class athletes you see during the Olympics. Just like pick-up basketball is different to playing Kobe Bryant, there are nearly endless levels of expertise and age in which you can compete in weightlifting, so you always have an entry point if you want test the skills you’ve learned.

“Don’t You Need Coaching for This?”

This is a “yes, but” answer. Yes, but every sport and just about every exercise needs coaching.

“If I decided I wanted to run the Chicago marathon and I just went out and started distance running tomorrow, I’d have shin splints and orthopedic issues,” says Gattone. “I mean, I have no idea about running mechanics or programming. Do I just run as far as I can? Jog one mile and walk another? You need someone with some base of knowledge.”

You don’t need to be coached for every weightlifting workout for the rest of your life, but at the very least you should see a coach to get your mobility and form looked at. Remember, the more easily you can hit the the positions, the healthier your movement is. Weightlifting exercises cause such a phenomenal cascade of head-to-toe benefits that the body seems to be crying out for them, and they do deserve to be performed in a way that brings the most benefits and has the fewest drawbacks possible. Don’t you deserve it?

“Where Would You Find a Coach?”

To find a qualified, USA Weightlifting-certified coach, you can simply head to Team USA’s “Find a Club” page. Plug in your city and zip code and you can select from a list of local clubs.

If there’s nothing in your area, Gattone says your next best bet for learning the movements is a CrossFit® gym. Although they only slot Olympic weightlifting movements among several other types of exercise (like gymnastics and high intensity interval training), the coaches usually have a solid grasp of technique.

Andrews is also a fan of remote coaching, noting that there are plenty of experts who will write programs and critique your form from afar. Mash Elite Performance, California Strength, and Waxman’s Gym are all solid options for coaching and training routines.

Olympic weightlifting is not just an Olympic sport with a big Eastern European fanbase. It’s an extension of the body’s most natural and favorable movement patterns, a salve for our aches and pains, a one-way ticket to aesthetics city, and it’ll make you feel and look stronger and more confident. Try weightlifting.

Editor’s Note: Seb Ostrowicz of Weightlifting House had the following to say after reading the above article:

“As well as the many physical benefits that we receive from weightlifting, an often overlooked benefit comes from the mental side of lifting weights. The first, and maybe most important is bravery. Bravery is needed for pulling under constantly increasing weights, moving faster and more accurately each time. The second is patience, needed for training day after day in similar movements, often taking weeks, months or even years to make progress.”