No, You Don’t Need Steroids to Look Like Kumail Nanjiani

There are always people who want you to be unimpressed with fitness.

Kumail Nanjiani is probably best known for starring in HBO’s Silicon Valley (but you should really see his movie The Big Sick) and he’s making headlines this week because of a pretty remarkable transformation he made: from comedian bod to superhero bod.

He landed a role in an upcoming Marvel movie The Eternals and per Hollywood custom, the schlubby comic actor got lean à la Chris Pratt, John Krasinski, and Seth Rogen. (Remember how he got all fit for that Green Hornet movie? No one else saw that?)

Anyway, the caption of his Instagram post is really worth reading because the 41-year-old details how much work was involved: this was a year long process that included a personal nutritionist making sure his calories and macros were accounted for down to the gram and almost daily workouts with a personal trainer (TMZ reported his workouts included overhead presses, lat pulldowns, and bicep curls, if you can believe it).

We bolded this section from his caption ourselves:

I would not have been able to do this if I didn’t have a full year with the best trainers and nutritionists paid for by the biggest studio in the world. I’m glad I look like this, but I also understand why I never did before. It would have been impossible without these resources and time.

The best part about this post is the supportive comments from other celebrities:

The worst part is that scores of comments and tweets are people rolling their eyes and saying “Yeah, that’s not so impressive, if I did steroids I could look like that too.”

Guys like Kumail getting bodybuilder buff out of nowhere on steroids and claiming it just from was diet and exercise is the same as super thin actresses on stimulants eating 1000 calories a day saying, “I’m just naturally this skinny from chasing after my kids <3”

kumail is doing the work to destigmatize steroid use

The people who think Kumail needed to do steroids to simply shred up are the same folks who thinking riding in a golf cart counts as exercise. If you have trainers and a strict diet for a year trust me you will see some serious results. #KumailNanjiani

Kumail isn’t on steroids, he just goes to the gym as often as you say you do.

You Don’t Need Steroids to Look Like Kumail Nanjiani

We know steroids are a tricky topic in sport and Hollywood and Insta-fitness, and don’t think for a minute we’re endorsing their use. They’re prohibited by most sporting organizations and illegal for recreational use in many countries around the globe.

And they’re definitely not necessary for a body like Kumail Nanjiani’s.

But this is not a body you need steroids to achieve. 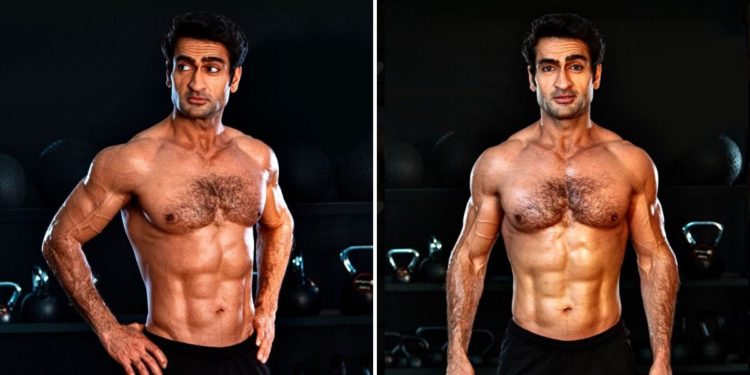 [Related: The 8 Most Impressive Feats of Strength By Hollywood Actors]

We reached out to Stan Efferding, famously enormous bodybuilder and the nutrition coach for World’s Strongest Man winners Thor Bjornsson and Brian Shaw, who simply said,

“I don’t think it’s worth responding to the haters. That’s definitely an achievable look naturally.”

Dr. Trevor Kashey, a biochemist, competitive strongman, coach of very elite athletes, and founder of TKN, more or less laughed in our faces when we asked if you’d need steroids to look like this guy.

“Not in the slightest, no,” he answered. “With a dark background, good lighting, lots of PAM spray, and good edits, you can do anything! I don’t think anyone would think that guy swallows dianabol. He looks like he lost 20 pounds and did some push-ups.”

Seriously, who are these people screaming “drugs”? They don’t deserve keyboards.

Kashey did add that when seven-figure paychecks are at stake, he wouldn’t blame actors for using steroids. (“This is acting,” he said. “Not the f*cking Tour de France.”) And we haven’t said that there’s no possible way he is on steroids.

What we are saying, and we talked to two extremely experienced coaches who have worked with clients at every level of human performance, is that Nanjiani doesn’t look like someone who must have taken steroids to achieve his physique and this is a body that is totally achievable without them.

He had a year to prepare.

He had a team of personal trainers.

He worked out almost every day.

He had every calorie counted.

People who scream “steroids!” at anyone who looks fit are people who don’t understand what the body is capable of, and they’re people who want to discourage others from being inspired by transformations like this one.

Kumail looks nice. Good for him.