There’s no question behind the strength and energy Dmitry Klokov brings to the sport of weightlifting. He’s one of the most decorated in the sport, has created a complete weekend to honor heavy lifts from top athletes, and is even designing his own line of weightlifting equipment.

In addition to all of this, Klokov holds frequent seminars to teach and educate athletes about Olympic lifting. Recently, Klokov held a weekend seminar at NSG Fitness Fitness on Long Island, New York. Unfortunately I wasn’t able to attend, but one of my close colleagues John Larson was.

John Larson is an M.S. Candidate, a Certified Strength and Conditioning Specialist (CSCS), and USAW Sports Performance Coach. Eager to learn what I missed, Larson filled me in on 10 of the best lessons he took away from the seminar.

Before diving in, it’s important to remember that these lessons are from Klokov and don’t necessarily act as an end all be all in the sport of weightlifting. You’ll learn what I mean by that in the first lesson below.

Larson said this was one of his favorite lessons learned. Someone as knowledgeable and decorated as Klokov understands that there’s more than one way to skin a cat. He noted that Klokov talked about great strength coaches understanding this concept and considering multiple methods to build their own training philosophies.

Larson paraphrased Klokov and said, “This is how we train for when we go to camp and how we’re brought up in Russia. If you prefer and feel more comfortable with the – American, Chinese, Colombian, and other systems – then that’s what you need to do. For the purpose of this seminar, this isn’t the right or wrong way to do things, this is just how we (Russians) do things.” 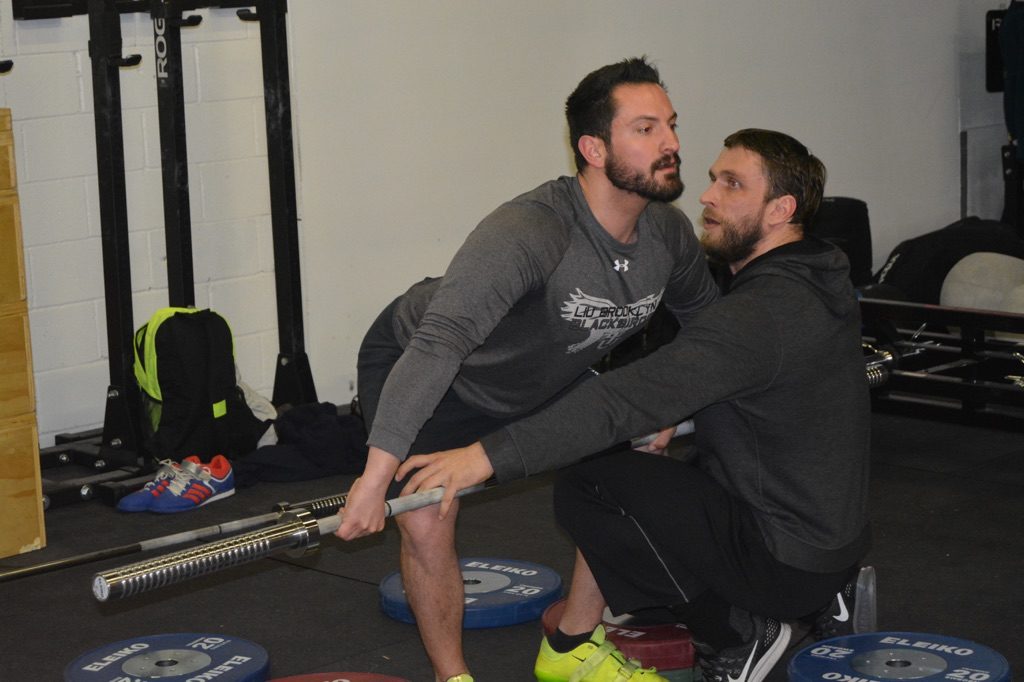 2. A lot of times strength athletes only show respect to the bar when they’re performing 1-RM attempts.

Klokov noted this is often caused by athletes working towards a near maximal lift and having a certain amount of anxiety or fear focused on the completion of their attempt.

Larson phrased Klokov’s advice as, “With your training you need to respect 50 and 60 percent of your max the same way you respect your 1-rep attempts. If you don’t, that’s when people start to get hurt. You have to approach every lift with the same amount of concentration and focus as you do with maximal attempts.”

3. Everyone tends to get caught up in fancy periodization schemes and forgets to train to better themselves with their fundamentals. 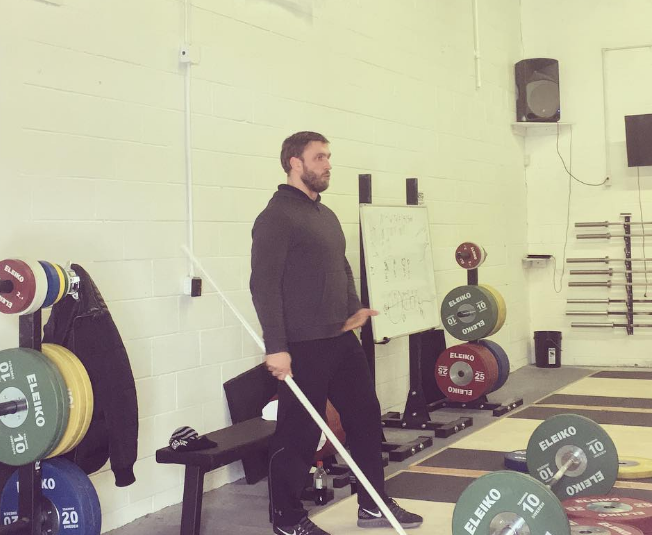 Sometimes micromanaging your program hinders results because you forget the fundamentals that build your lifting base. Focus on your movement patterns, control, tempo, and really focus on strengthening your fundamentals.

Klokov said, “People place too much emphasis on special this and special that – in reality – the focus should be on just getting stronger and better with your fundamentals.”

4. There’s lack of understanding between what you see and what it actually is.

In reference to professional weightlifters in Russia, a big part of the reason they’re so big and mobile is that they lack a lot of stress in their life. The Russian Olympic federations pays for their athletes to have frequent massages, sauna sessions, and meetings with doctors. It’s not necessarily a luxurious life, but they concentrate primarily on weightlifting.

Klokov said that, “When you have so much of this stress continually taken care of, then it enhances your lifting. He feels Americans too often go on YouTube (and other sources) and try to mimic some of these athletes’ complexes and training cycles. You guys (Americans) have far too much stress in your lives to try and adequately perform what professional weightlifters are doing.”

5. In America we train the full Olympic lift too frequently; there needs to be more emphasis on recovery.

He said that focusing on Olympics lifts from different positions, their fundamental aspects, and longer recovery are keys to success.

Klokov talked about only training his clean & jerk once every two weeks, or once every ten days, along with a full snatch. Then he gave an example of how CrossFit® athletes perform full movements often 2-3 times a week for as many reps as possible in as little time as possible. This leads to injury and lacking technique. He believes Americans need to place more emphasis on recovery so there can be more on effective training, not the more is more mentality.

6. Athletes (non-weightlifters) who want to use Olympic lifts to increase performance should do so from the hang position and catch the bar in a power position.

Larson being a college strength coach, asked Klokov, “Do you see utilization of Olympic weightlifting variations in collegiate athletic programming useful and viable?”

Klokov said he doesn’t see a problem with it, but many coaches have a very vague understanding of what weightlifting truly is and how to coach it. He recommended performing light cleans and snatches from the hang, and didn’t recommend teaching an athlete the full movement.

First, there’s already too much stress and stimulus already on an athlete’s brain (school, practice, conditioning, etc). There’s not enough time allotted by the NCAA for athletes to truly learn how to do these lifts correctly. Second, there becomes too much of a chance for injury completing full movements. 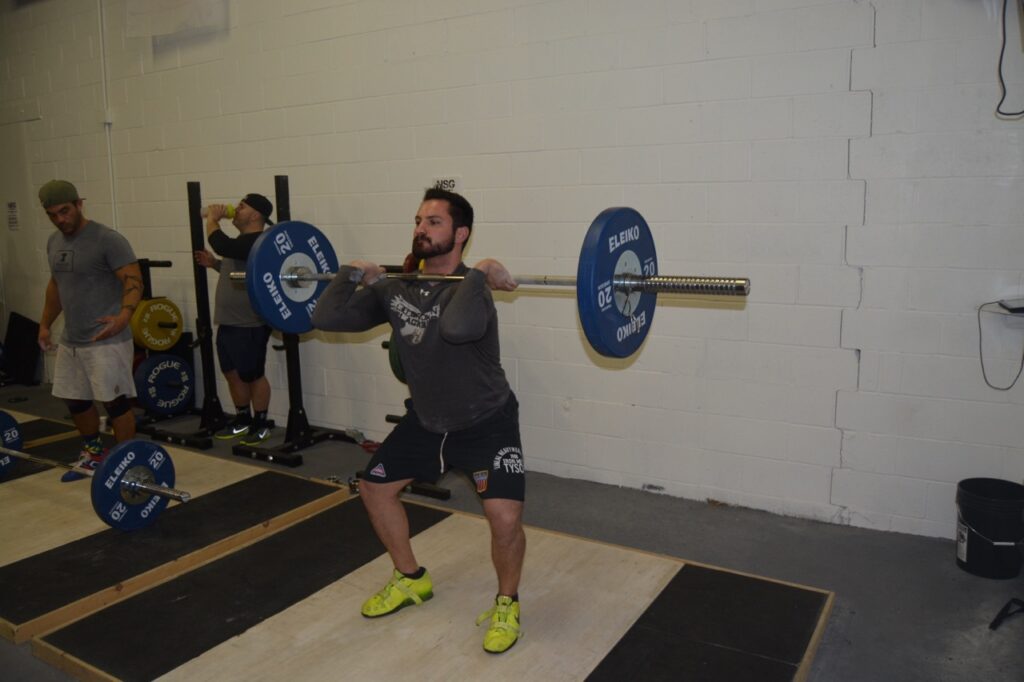 7. “Jump and shrug” is a misused cue in most gyms, especially athletic gyms.

Klokov discussed why this cue should be rephrased or used differently. One, if you’re jumping with a weight, then you’re increasing the amount the load will crash onto the shoulder girdle of the athlete.

Two, you’re not truly shrugging the bar, what happens is the athlete will inevitably begin to pull with their arms. All your arms should be doing is connecting your body to the bar, Klokov doesn’t want the use of arms during the pull.

He prefers teaching an athlete where to make contact. Then when contact is made, the body begins to travel synergistically with the bar on the way down and the foot shift begins to catch the weight in a stable position.

8. There’s overuse on the coaching cue, “hips through the bar,” or “get your hips through.”

He said when most athletes think “through” they think of horizontal displacement, or going through something. That’s not what we want in a snatch or clean, we want to bar to continually travel up.

A thrust into the bar will cause the bar to kick away from the athlete, which then causes the bar to move away from an athlete’s center of gravity. 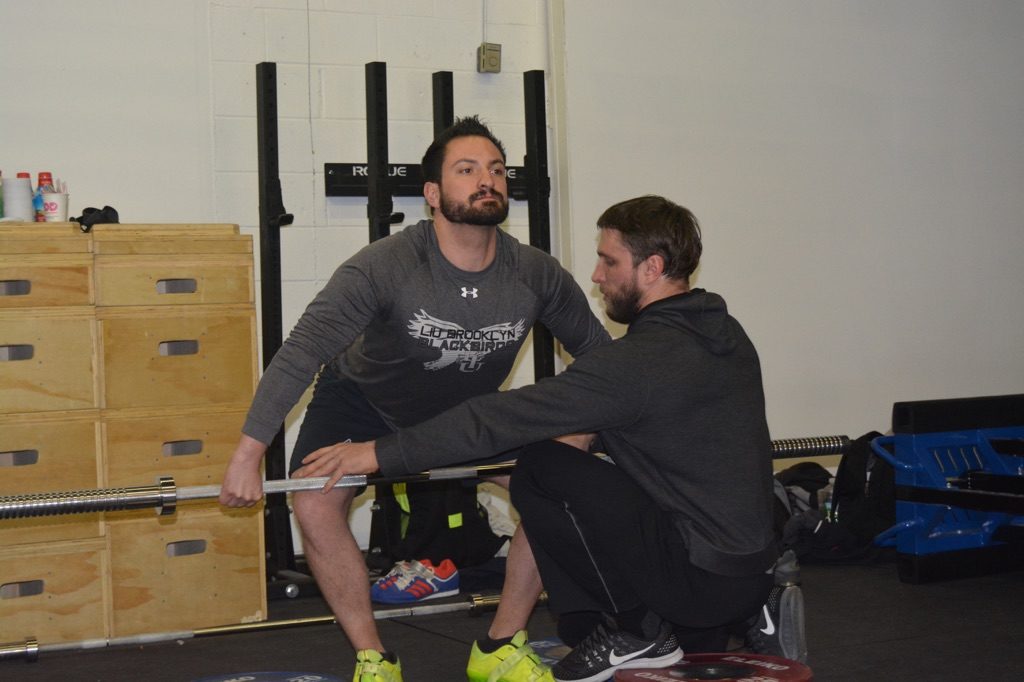 9. Too many weightlifters and functional fitness athletes in America catch the weight with their fingers.

Klokov wants the full hand around the bar. He said that catching the bar with the fingertips is a telltale sign that your lats and shoulders are lacking and there’s a weak point in the shoulders.

10. Front squat versus back squat when it comes to training your lower-body.

Klokov discussed that training a back squat is truly training the lower-body. When a weightlifting athlete uses a front squat in training, it’s more so to improve your spinal angle and erectors to maintain a stable position during the catch of a clean.

If you have an athlete that wants to increase their lower-body strength, then back squatting with tempo is one of his preferred methods. A ratio Klokov likes to use for weightlifters and back squatting to front squatting is 2:1 (back squat, more so than front squat).

A great coach is someone who’s open to other methodologies and is hungry for continuous learning. Athletes like Klokov are great assets as they continue to make it possible for coaches from all walks of life to learn from a knowledgeable source.