MAN Sports is based in Texas and their name is actually an acronym: it stands for “metabolic augmenting nutrition” and they promise “hand-crafted, hand-bottled, microbatch” supplements — phrasing that makes them sound just a little like a craft beer company. Today I’m trying MAN Sports’ ISO-Amino BCAA supplement.

They do have an admirable focus on honesty in marketing, promising complete transparency and no “everything & the kitchen-sink” formulas that “only cushion the manufacturers wallet.”

There are zero calories per serving. There’s no sodium and no electrolytes either. The main ingredients are just the five grams of branch chain amino acids themselves: instantized leucine (2.5 grams), isoleucine (1.25 grams), and valine (1.25 grams). That’s a 2:1:1 ratio, which is pretty common.

After that, there’s a variety of flavorings: citric acid, sucralose (also called Splenda®), acesulfame potassium, maltodextrin, and natural & artificial flavors. The only other ingredient is silicon dioxide, an anti-caking agent.

The branch chain amino acids themselves have been linked to increased endurance, muscle gain, and focus during workouts.

That’s no small feat, but that’s all that pretty much all this product offers (and that’s not necessarily a bad thing). There are no extras like l-arginine or glutamine or Vitamin B12 or anything like that.

It’s not an all-natural supplement, though. Although it’s free from artificial colors and dyes, it contains two artificial sweeteners (sucralose and acesulfame potassium) as well as maltodextrin, a type of carbohydrate made from starch that has a high glycemic index. However, it’s the final ingredient in the mix, so the glycemic spike is probably negligible.

It may be worth noting that it’s made in a facility that processes several major types of allergen: gluten, nuts, milk, egg, soy, shellfish, and so on. If you’re extremely allergic to these ingredients, it might not be for you.

It costs just a little over $20 for 30 servings, so that’s 66 cents per serving or 13.2 cents per gram of BCAA. That’s a very competitive price. Most of the cheapest brands out there, like the BCAAs from Scivation and MusclePharm, cost about 11 cents per gram. So while MAN isn’t the cheapest you’ll find, it is very reasonably priced.

I picked up the Sour Batch flavor. Most BCAAs have sweet-and-sour flavors like Fruit Punch or Watermelon or Blue Raspberry. That’s because BCAAs are naturally pretty bitter and they need sour flavors to mask their taste.

What’s interesting about MAN’s Sour Batch flavor is that it just tastes like sweet-and-sour, without any extra fruitiness or flavoring, like Watermelon or Passionfruit.

It’s tasty though. If I had to pick a flavor it tastes like, I’d say it’s a little bit like Blue Raspberry. 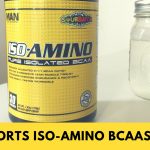