MusclePharm Assault Pre-Workout Review — What’s Up With the Dosages?

MusclePharm is a Denver-based nutrition company that’s known for making some of the most inexpensive supplements on the market, many of which are targeted at MMA athletes — you may be familiar with their Combat Whey protein and Combat Crunch protein bars.

Their pre-workout is appropriately called Assault, and it’s labeled “the ultimate performance and energy complex.” Here’s what we thought of the Fruit Punch flavor.

There are zero calories per serving.

The Energy & Focus blend has 200mg of caffeine and 150mg of acetyl-l-carnitine.

The Muscle Fuel has 500mg each of taurine and glycine.

The Strength & Performance has 1.5 grams each of beta alanine and creatine and 500mg of betaine anhydrous. I’ll discuss the effects of all these ingredients in the next section.

Finally, there’s just the Other Ingredients: natural flavorings like citric acid and malic acid, artificial flavorings like sucralose and acesulfame potassium, and anti-caking agents like calcium silicate and silicon dioxide. There are no artificial colors in this product.

There are plenty of effective ingredients here. The most undeniable are the vitamins, since we know their recommended daily intakes and they’re clearly marked. They aren’t stimulants, but if you were already low in B-vitamins (which is unlikely), they may assist with normal levels of energy production. The Vitamin C has also been linked to decreased cell damage during exercise.

The 200mg of caffeine is a little over what you’ll find in two cups of coffee, and I’ve found it’s pretty much the standard amount in a pre-workout. The acetyl-l-carnitine that accompanies it has been linked to improved blood flow and focus.

In the Muscle Fuel blend, the taurine may improve anabolism and muscle cramps by drawing more water into muscle cells, and the glycine has been linked to cognition.

The ingredients in the Strength & Performance blend may also be useful. The beta alanine is associated with endurance while creatine and betaine anhydrous have been linked to power output.

My main issue with the ingredients in Assault is that some of the dosages may be a little low. The caffeine and glycine will probably have an effect, but studies have suggested that effective doses of creatine, beta alanine, and betaine anhydrous would be about twice as high as what’s found in Assault. In particular, there’s 150mg of acetyl-l-carnitine, but studies suggest standard doses should be between 630mg and 2500mg.

Assault is very cheap which almost makes this forgivable, except that you can’t exactly double your serving to get an effective dose of these ingredients because that would give you an enormous amount of caffeine. This isn’t to say there’s no benefit at all to the ingredients that I consider underdosed, but don’t expect results as dramatic as you may have seen in studies.

Assault is very cheap, and as a source of caffeine, vitamins, taurine, glycine, and beta alanine, it’s not bad. It’s an instance in which I’d say you get what you pay for: there are plenty of benefits. 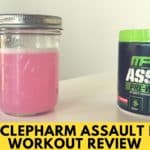