MuscleTech is owned by Iovate Health Sciences in Ontario, Canada, which is the same company that owns popular supplement companies Six Star Pro Nutrition, StrongGirl, and Hydroxycut, among others.

MuscleTech is pretty well known for being reasonably priced — click through to read our reviews of their Pro Series whey protein and Vapor X5 pre-workout — and while their Platinum Creatine is super cheap, we wanted to try we wanted to try their pricier creatine formula called CELL-TECH. It promises to be “the most powerful creatine formula” you can buy. Does the science hold up?

Cell-Tech deserves its reputation as a particularly effective way to deliver creatine.

As far as nutrition goes, there are 150 calories per scoop. They come from the 38 grams of carbs you get in a serving, which include 15 grams of sugar and 2 grams of fiber.

This is a pretty nutritious product too, with over two hundred percent of your daily Vitamin C and Vitamin B6, as well as decent amounts of Vitamin B12 and magnesium, plus some sodium and potassium.

Then there’s a “Cell-Volumizing Amino Acid Matrix” of taurine and l-alanine; a “BCAA Matrix” of leucine, isoleucine, and valine in a 2:1:1 ratio; and 100 milligrams of alpha-lipoic acid.

The rest of the ingredients are mostly artificial sweeteners (like sucralose and acesulfame potassium) and other flavorings, some anti-caking agents, and some food dye. It’s worth pointing out that it does contain ModCarb™, a blend of oat bran, quinoa, buckwheat, and millet. ModCarb may be why less than half of the carbs come from sugar.

So why is this so effective? First of all, I don’t think there’s any real reason to include two kinds of creatine. Creatine citrate has been bound to citric acid and while it may dissolve a little more easily in water, that doesn’t mean it absorbs more easily in the body.

But there are two big things that CELL-TECH has going for it. The first is the hit of carbs; some studies have found that combining creatine with liquid carbs significantly increases the amount of creatine that winds up in the muscles.

As for the other ingredients, the taurine may help with recovery by drawing more water into muscle cells and reducing cramps and the branched chain amino acids could help with muscle protein synthesis. That said, BCAAs are usually dosed at 7 grams and there’s just one gram in each serving of CELL-TECH. It may help nonetheless — it could shift the nitrogen balance to become more favorable to building muscle — but I doubt it’s an especially significant effect.

The nutrition may also play a role, particularly the Vitamin C, which could reduce cellular damage associated with working out, and the B6, which helps retain muscle and which we appear to lose during exercise.

You can pick up 3 pounds for $23, which makes it 82 cents per serving or 16.4 cents per gram of creatine. If all you care about is the creatine there are cheaper ways to get it, since creatine monohydrate averages about 4 cents per gram. But you’re paying extra for all the extra ingredients and flavorings, so you may find the price worth it.

This comes in Fruit Punch, Orange, Icy Rocket Freeze, and Grape flavors. I tried the Grape, which tastes exactly like grape flavored bubble gum. If you like grape candy (and I do) you’ll be delighted by the taste, but note that if you follow MuscleTech’s directions and mix it with one cup of water, it’s a very strong flavor. I’d recommend mixing it with two cups.

When I saw this advertised as “the most powerful creatine formula” I was skeptical to say the least. But of all the creatine products I’ve seen that claim to be more effective than plain creatine monohydrate, CELL-TECH actually has the goods. I can’t be super excited about it since it uses less alpha-lipoic acid than the study I cited above, but there’s nonetheless reason to believe this actually will get more creatine to your muscles than plain monohydrate. If you’re willing to pay the extra. 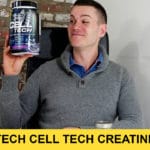