The Complete Guide to Reverse Pyramid Training for Strength and Muscle

Start from the bottom to get to the top.

There are many ways to skin a cat in the iron game. Trying to build strength, muscle, or even endurance can allow for a diverse range of training protocols suited to your needs and your training preferences. From using a straight forward sets-across method to cluster sets and beyond, the amount of techniques and styles available is nearly endless.

For every choice that has been shown to be beneficial, there also seems to be a new tool that flips the script and still produces gains.

Enter the pyramid set — or more specifically, the reverse pyramid set. What is it, how does it work, and why should you start training with it today?

What Is Reverse Pyramid Training?

Reverse pyramid training, or RPT, takes the classic method of increasing your intensity every set (often in exchange for fewer repetitions) and flips it on its head.

Instead of starting at a lower percentage of, say, your 10-repetition maximum (10RM) and increasing the load set-over-set, the reverse pyramid set will start heavier and get progressively lighter. (1)(2)

The classic example would be to start a true 10-repetition maximum for the first set, before performing two additional sets of 10 repetitions at roughly 75 percent and then 50 percent to follow.

While originally called the Oxford method, centered around the 10RM of any particular exercise, the reverse pyramid can be applied to many exercises as long as you stick to the plan. (2)

Start heavy, get lighter as you go. But that doesn’t mean making the movement easier along the way.

What the Science Says

There is evidence to suggest that both traditional and reverse pyramid training schemes can produce similar results in strength and hypertrophy; however, a reverse pyramid may be able to accomplish these gains with a lower total workload than traditional methods.

This is likely due to the fact that reverse pyramid training can recruit higher threshold motor units by utilizing greater intensities during the heaviest sets than are seen during more traditional training styles.

These high threshold motor units control your fast-twitch muscle fibers (the ones that result in the most strength, power, and hypertrophy). Where a traditional style may utilize 3 sets of 10 repetitions at the same weight for each set, reverse pyramid training taps into higher intensities and thus requires less total work, letting you more efficiently accomplish similar results. (1)

The psychological benefits of reverse pyramid training is also interesting to consider — making it potentially more enjoyable due to the lowering of load as fatigue accumulates across your training session. (2)

Moving away from heavier weights as your workout progresses can alleviate some of the mental rigor of training hard, while still ensuring you’re having a productive session in the gym.

How to Perform Reverse Pyramid Training

While the reverse pyramid can be considered a full training protocol in itself, you can also break it down into the underlying parts and more casually apply it to many areas of your workout for great results.

Your compound, barbell-based lifts are a great place to start, but even isolation exercises (or full workouts) can be integrated with RPT.

This is where the reverse pyramid really shines. The traditional reverse pyramid method would have you perform the first set at an accurately-measured 10-repetition maximum of your lift; for example, a 10RM of a back squat.

Don’t be afraid to take some liberties with the set and repetition scheme. Although the original method was designed using sets of 10 repetitions balanced around a known percentage of your 10RM, you shouldn’t feel handcuffed.

You can still make some serious gains while simply following the overarching premise of decreasing the load and increasing the repetitions per set as the workout progresses.

While it’s pretty easy to find and define your 10RM for the big barbell movements, it’s hard to accurately assess a real max on small, single-joint movements.

When it comes to isolation work, apply the basic premise of RPT but loosen your reins a bit. Start with a heavy set (think 8-12 reps) first before decreasing the weight and trying to match (or exceed) the rep count on the sets that follow.

Using a rating of perceived exertion (RPE) as your guide is a great option here. For example, on a machine biceps curl, start with a hard set of 10 repetitions (at an 8-9 RPE) before dropping the pin and lightening the load for the next two sets.

This lets you judge your “max” less formally while still giving you a reliable starting point.

As a Full Workout

The further away from the classically defined “Oxford method” you go, the more fast and loose you can be with the loading parameters.

It’s not a strict programming principle, but ordering your exercises on, say, chest day such that you perform low-rep, heavy movements first and then graduating to lighter, higher-rep work is fine too. It’s a loose — but valid — interpretation of the principles behind RPT.

There are several exercises that may be particularly well-suited to RPT.

For example, the squat, leg press, leg extension, preacher curl, and lateral raise can all benefit from some variation. These different exercises can be used in isolation or combined to create an entire workout.

Note that these movements are far from the only way to employ RPT, but they should serve as useful and inspirational examples.

This is where the classic prescribed 10RM style of training applies best. Scale your load to a top-set of 10 repetitions at as close to a true 10RM as you can before dropping the load for two additional sets at 75 and 50 percent.

Doing this on the back squat is a fantastic way to pack in a lot of useful training volume without even having to leave the squat rack.

The leg press serves as a great analog for the squat when you don’t have access to a barbell or simply do not wish to squat. You can also get closer to failure with the peace of mind of the machine to keep you safe.

Load it up and hit a heavy set before dropping a few plates off for each subsequent set and pushing for higher repetitions. The straightforward technique of the leg press combined with a convenient loading mechanism makes it great for RPT.

The leg extension serves as a great (often pin-loaded) machine variation for reverse pyramid training. Similar to the leg press, all you’ll need to do is perform a top set with the heaviest load you can before dropping the pin one or two notches for each additional set.

The lateral raise reverse pyramid looks a lot like “running the rack” as you would for a grueling drop set. Start with one set of dumbbells that you can cleanly complete a hard set of 10-15 repetitions with.

Each time you finish a set, slide down to the next dumbbells or two down the rack to hit your additional sets and repetitions. It’s convenient, quick, and will give you one heck of a shoulder pump to boot.

The big benefit of RPT is in its ability to progressively overload your training, and how simple it is to apply the method to both multi and single-joint exercises. That said, it does have other useful perks.

Progressive overload is one of the most important aspects of any program. Slowly adding challenges to your training through some form of tangible increase (sets, repetitions, load, or any other variable) is what will help you produce the stimulus to keep you growing. 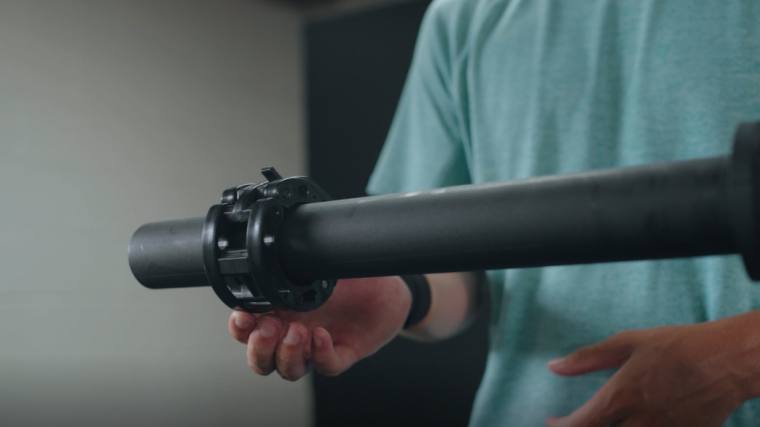 The reverse pyramid method helps to guarantee you’re experiencing some form of progressive overload by offering challenges at a variety of different rep and intensity levels.

This is especially true when you’re able to use an accurately measured repetition maximum for any of your exercises, you can more effectively assure that progressive overload keeps rolling!

The reverse pyramid is extremely effective while using a multi-joint exercise. Not only are they huge for progressing both your strength and muscle gain, they are also more often the exercises you will have an accurate estimate of your real max in.

With this information in your back pocket, you can have a much more effective workout with an accurately programmed progressive overload stimulus at the ready.

It’s not steeped in science, but RPT deserves some props for how it alters the flow of your training sessions. Hitting the same set-rep scheme for weeks on end can be both boring and tiresome.

RPT allows you to vary your rep ranges which slightly alters the experience while keeping true to your goals of gaining mass and strength. Give it a shot if you’re a bit burnt out on your programming and are looking to spice things up.

Who Should Use Reverse Pyramid Training

The reverse pyramid style of training is fantastic for building strength, can be easily applied to bodybuilding, and also helps weave these two goals together seamlessly during concurrent training styles.

The pursuit of strength is centered around multi-joint exercises — lifts that RPT pairs nicely with. Not only will the implementation of repetition-maximum data help you land within the correct strength training “loading zones,” it will also keep you from overkilling yourself by using too heavy of a load too often.

The top-set-down-set style of strength training that the reverse pyramid emulates will be a great way for you to get strong while also not getting too beaten up. If you find yourself slogging through your compound lifts, or if your form is suffering, give RPT a shot.

Bodybuilders (and building muscle in general) stand to benefit from getting stronger, but it also helps to add greater degrees of volume to help assure growth.

The heavy set of the reverse pyramid does a great job of progressing strength but also helping to calibrate where you should load your subsequent sets to keep your training close to failure.

Use the first, heaviest set in an RPT scheme to inform how you’re feeling on the day and how hard you can push. You’ll find you get more meaningful, productive workouts by putting the heavy stuff in the front most of the time.

Those Looking for Change

The gym should be as much about fun and fulfillment as it is about crushing your goals. If you’re on the path to progress but find the road a bit too windy, you can implement RPT to bring some novelty into the picture.

Reverse pyramid training doesn’t fundamentally alter your programming — you still perform about the same amount of “work” on a session-to-session basis.

Varied loading reduces some of the monotony that often comes along with dedicated gymgoing, and that’s a good enough reason on its own.

The reverse pyramid is a tried and tested form of training that can benefit multiple prongs of your program. Whether using barbells and strict rep-max calculation, or a more loose top-set down-set style of training, the reverse pyramid has applicability throughout your workout.

It’s been shown to help improve strength, muscle building, endurance, and can even potentially be more psychologically sustainable than other methods. (1)(2) If you’re looking to revamp your workouts and make some great strides toward your goals, give RPT a shot right away.