This is one creatine product that brings a lot more to the table than just regular monohydrate.

Six Star Pro Nutrition is a supplement company that’s owned by Iovate Health Sciences, the same company behind MuscleTech and StrongGirl, and the brand is targeted a little less toward bodybuilders and more toward pro athletes like baseball, basketball, and football players.

They’re pretty well known for their four different pre-workouts, but we wanted to try Creatine X3, a supplement that combines creatine, branched chain amino acids, and a few other interesting extras.

Scoops are large and provide 90 calories and 19 grams of carbohydrates. That includes 5 grams of sugar and a small amount of sodium and potassium (3 and 1 percent of your daily intake, respectively).

The creatine blend has creatine monohydrate and creatine HCI; the BCAA blend has leucine, isoleucine, valine, and taurine; and the Amino Matrix has glycine, arginine, and methionine. These blends are proprietary, so we don’t know how much of each ingredient they contain.

The other ingredients are mostly natural and artificial flavors, colors, sweeteners, the sugars maltodextrin and dextrose, and some anti-caking agents.

Looking for the right brand? View our best creatine page.

Is there a difference between creatine monohydrate and creatine hydrochloride? Probably not a huge one, though the creatine HCI is more water soluble so it’ll dissolve more easily. It’s also possible that it’s easier on the stomach if regular creatine happens to upset your stomach. Otherwise, there’s no evidence to suggest that it’s more effective than monohydrate and in any event, this product combines HCl with monohydrate, so if monohydrate causes you stomach issues then you won’t be avoiding them with this product.

As for the BCAAs, there’s evidence that they can help promote muscle protein synthesis, so they may help you retain muscle.(1)(2)

Still, a good dose of BCAAs is about 7 grams and there are less than 2.5 grams of BCAAs in Creatine X3. and taurine, so the doses are probably too small to have much of an effect on your workout. To be fair, the label says that the BCAAs are just there to “boost nitrogen levels,” which may help with muscle gain.

The Creatine Synthesis Amino Matrix is an interesting inclusion. It’s glycine, arginine, and methionine, which are the three amino acids that make up creatine itself. The human body makes its own creatine in small amounts, and some studies suggest that consuming the unbonded amino acids on their own may help you to make your own creatine.(3)

Otherwise, the extra carbs may help the creatine to absorb and the electrolytes can help with hydration.(4)

All things considered, that’s pretty cheap. The most inexpensive creatine you’re likely to find, GNC’s plain creatine monohydrate, is 3.3 cents per gram of creatine. Creatine X3 is more expensive but given the wide variety of additional ingredients, I think it’s very reasonably priced.

It only seems to come in Fruit Punch flavor. I was expecting something more sour, since BCAAs are naturally bitter and they usually need sour flavoring to mask the taste. But one scoop mixed with 1.5 cups of water had a pretty tame cherry flavor.

This is a pretty interesting product. The two kinds of creatine make it a little more soluble, the BCAAs slightly boost your nitrogen, the amino acids may help you to make your own creatine, the carbs help the creatine to absorb a little, the electrolytes help you hydrate a little.

All of these, to be clear, probably aren’t massive benefits, but they do help to slightly elevate Creatine X3 above the competition, particularly since it’s not all that much more expensive than regular creatine. If you’re convinced, then you’ll be happy with this inexpensive, innovative supplement. 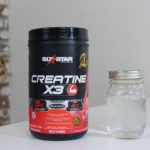