Steve Cotter is one of the best known kettlebell experts on Earth, though “kettlebell missionary” might be a more apt term. He spends the bulk of the year traveling the globe promoting kettlebells and delivering seminars and certifications as the founder and director of the International Kettlebell Fitness Federation (IKFF), one of the most influential bodies in the sport.

Cotter is a complex guy. He isn’t just a world-renowned authority on cannonballs with handles, he’s a USA Weightlifting Club Coach, a Certified Strength and Conditioning Specialist, a national champion in full-contact kuoshu (a type of kung fu), a passionate vegan, and was named one of the 100 fittest men of all time by Men’s Health after he cranked out a dozen pistol squats with a 70-pound kettlebell in each hand.

He knows strength and conditioning — he trains NFL teams and even US Navy Seals — and knows exactly how to convince skeptical athletes that kettlebells can make the leap from girevoy sport to become an indispensable part of training for Olympic weightlifting, powerlifting, and general physical preparedness.

We caught up with Steve via Skype from his current base in Rimini, Italy, to learn the precise strategies that strength athletes can use to improve at their sport and their general physical preparedness.

BarBend: Steve, thanks for taking the time to chat. What brings you to Italy?

Steve Cotter: I’m speaking at Rimini Wellness, Europe’s second biggest fitness event after FIBO in Germany. These days, most of my seminars are in China, with Europe coming second. I’ve worked in more than ten different cities in China over the past couple of years.

Why do you think kettlebells are becoming so popular in China?

The first factor is the economic development in China. The Chinese have more economic power than they ever have, so fitness is becoming more popular because they can afford it. Fitness is a luxury in most places, after all. The Chinese also really value education, so they’re great students.

And obviously, they’re some of the best Olympic weightlifters in the world.

I wanted to ask about that, because I know you’re also a weightlifting coach. What kind of kettlebell training do you recommend to improve performance at Olympic weightlifting?

I would say the main contributions kettlebell training has for Olympic weightlifting is as a warm-up — traditionally, Soviet weightlifters used the kettlebell overhead squat as part of their warm-up. It improves mobility and flexibility, particularly for the shoulder girdle and the upper spine.

The main example would be to look at the snatch. The limitation for most people is going to be the flexibility to get into the bottom position, where the bar is going to drift forward and they have to open the thoracic cavity and keep the shoulders back so that the bar can be over the center of mass.

So the kettlebell overhead squat allows us to work on one side at a time, and it does allow some rotation, where you would not have that rotation with the bar. So basically, doing the overhead squat with a single kettlebell until you reach a sticking point, when you can sort of rotate your trunk slightly toward the loaded side. So if I had the bell in my left hand, I’d rotate toward my left side, which allows me to sink deep into the position and loosen up the shoulder girdle.

That would be the main benefit for weightlifters. The secondary benefit would be for general physical preparedness and conditioning, basically to provide cardio for weightlifters. And then the swing, particularly the one-handed swing, is great for building an athlete’s grip endurance.

Speaking of which, let’s talk powerlifting. Donnie Thompson is one of the few men to have squatted over a thousand pounds, and he said that kettlebell training is what helped him do it. How would you go about programming kettlebells for a feat like that?

Yes, I know Donnie. He’s a great example, and from having talked with him, what he referred to specifically was doing heavy double swings. Basically, he said that doing heavy double swings strengthened his lower back to improve the deadlift, and I could have the numbers wrong, but I think he said he used them to add something like eighty or a hundred pounds on his deadlift. I believe he was doing five sets of ten heavy swings, with two kettlebells of somewhere between 32 and 48 kilograms.

Do you have any other advice for powerlifters?

Definitely kettlebells can improve flexibility and conditioning, because conditioning can be a limitation for powerlifters. Running and traditional long, slow, aerobic distance isn’t going to be beneficial, in fact it would be detrimental for powerlifters, so kettlebells allow cardiorespiratory and muscular endurance but it doesn’t put the pounding on the body from trying to do running or things like that.

So, all the benefits of cardio without the detriment — it helps them handle a higher volume of training and recover better between sets.

Awesome. And what about when your average recreational lifter or functional fitness athlete comes to you and says they just want to improve their swing endurance, what do you usually tell them?

I think what really works for general fitness would be density training. That would basically be trying to do a certain volume and then decrease the rest periods, so basically keeping the volume the same and doing it in less time.

You once wrote a book called The Encyclopedia of Kettlebell Lifting, right?

What do you find yourself needing to explain over and over again?

The finer points of the swing. There are a lot of aspects that people get wrong.

The swing is the most important and the foundational exercise, because all the other moves have that in it — the snatch has the swing in it, the clean has that swing in it, jerks have the swing first, to get it into the rack.

And as far as the primary teaching cues, which also tie into common things to avoid, one is that a lot of times a beginner is gonna squat and lift the bell pretty much using the arms and the back, and instead what we want to do is keep the upper arm connected to the torso. And then as we let the kettlebell swing back, that’s loading the hips and as it swings forward we want to maintain that arm body contact, so as the knees, hips, and torso extend, the body mass is driving the load. So the arms are really just guiding, they’re not pulling. That’s a key point. 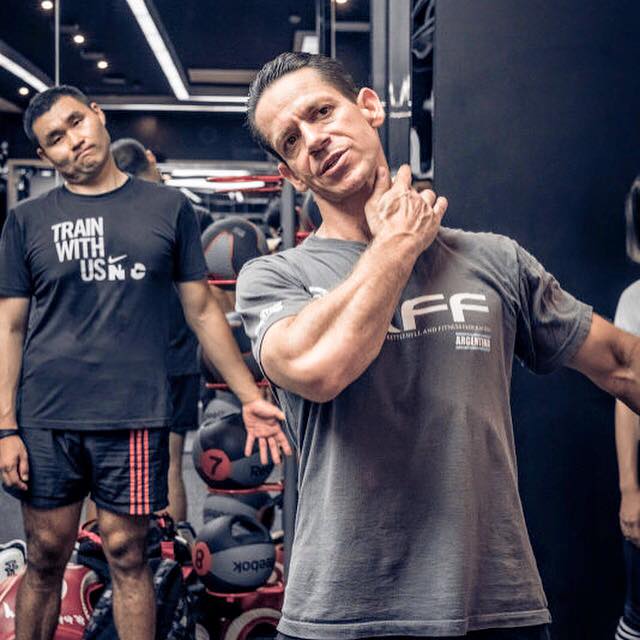 Another thing which is particularly relevant with the one-handed swing is people overgrip. The one hand swing is very grip intensive and if you’re overgripping you’re gonna get fatigued early on, so we want you to grip it loosely with the fingers, not a crush grip.

A third point is the breathing. A common novice would do one breath one rep, exhaling as the kettlebell swings upward, however I’d recommend two breaths for every one rep. That keeps the heart rate stable as we increase the repetition. Otherwise, you’re gonna go into oxygen deficit and the heart rate’s gonna keep accelerating. So we use that double breath, emphasizing a strong exhale. One exhale as it swings behind you and another as it swings upward, with each exhale immediately followed by an inhale.

Before I let you go, I noticed that you’ve been posting a lot of vegan meals on your Instagram…

Yes, I’ve been vegan for two years, now. Essentially, I made the decision that I’m not going to contribute to the suffering of my animal friends anymore. It’s fairly complex, but the state of the food industry is extremely corrupt and especially in the US, most animals spend their entire existence in cramped cages and they’re in constant fear. Animals are sentient beings, they have consciousness like humans do, and they also have fear. They know they’re going to be be slaughtered, and they defecate and urinate all over themselves, and the meat industry is feeding these animals all kinds of antibiotics and we’re absorbing all of that — the antibiotics and the emotional trauma of the animals.

So that’s kind of the root of it. And even if you don’t want to accept that, realistically, it’s just not sustainable for the planet.

To be clear, I’m not lecturing anybody. I’m not suggesting that if someone eats meat they’re anything lesser or anything like that. I’m 47, and I ate meat for the first 45 years of my life. I’m simply sharing my evolution and my journey.

People think they can’t be strong without meat. What I say is, muscle is the least of strength. True strength is the power of the mind, true strength is our focus, and what I believe is if someone is really strong, they ought to use their strength to help someone hold up who might be less strong.

If we are going to eat meat, it should at least be small pieces of meat mixed with vegetables. That’s the traditional way all cultures have eaten meat; they’d eat it infrequently and they weren’t having big chunks of meat like a steak. The foundation of the nutrition would be plant-based.

I’m not trying to be controversial or offend anybody. It’s just fundamentally changed my life for the better. It’s made me far more conscious, I’m far more clear in my thinking, it’s given me a greater sense of consciousness, I’ve become kinder. And I think those of us in leadership positions in fitness and strength coaching have the capacity to make a shift, to change people’s behaviors, so I have a responsibility to tell people what I think will improve their bodies. It’s my job.

Food for thought. Well, thanks so much for taking the time to chat, Steve! Hope we can pick your brain for more information on elite kettlebell training in the future.